Riley is now in the double digits.  Yes, I said that right.  Saturday, Riley turned ten years old.  All I have to say about that is, you go kid.  Keep growing and getting bigger, smarter, stronger.  Don't stop until you have become the man you were meant to be.
And now my eyes are filling with tears.
I am 33 years old and I have a ten year old?  Oh, yeah.  I also have an eleven and a half year old, too.  I'm just not old enough to have kids this old.  You see, I hear people say things like, "That makes me feel so old!"  But it doesn't make me feel old.  I still feel 20.  Except on the days when my hip hurts because of that fall I took three years ago, or when my neck hurts from that whiplash I got when I was 14 and I didn't know I was injured causing it to heal wrong.  Those things make me feel old.  But my kid turning ten?  No.  That has nothing to do with me.  He's getting old.
I told him this year, he could have a friend party.  I meant to throw him one last year, but it just never happened.  This year I had to do better.  Ten is a milestone after all.
He told me he wanted a Monster-themed party.  I didn't give myself enough time to just order everything I needed online, so it was a mix of different monsters.  We played Pin the Grin on the Skeleton, Monster Hot Potato, went on a Monster Walk, and then we played Musical Chairs.  Riley said, "Musical Chairs is a dumb game," and refused to play, but his friends had fun.  I find that funny because I gave him the list of games I had planned and he approved them all.  He's so weird.
He and I baked his birthday cake together the night before so that he could earn his Bear award.  Yeah, we played that one to the very last minute.
Honestly, I'm kind of glad it's over.  Planning parties is hard.  It causes me anxiety.  I was never a party girl, so I don't really know what's fun any more.  When those boys arrived, all they seemed to want to do was run through my house screaming.  There were 10 boys in my house that day.  Ten boys yelling at each other that they killed the other with a sword.  Ten boys running up and down the stairs yelling incoherently.  I'm really surprised my head didn't literally explode.  Needless to say, I started the games really quickly.  And I'm also glad that three boys didn't show up.  Kurtis helped me with dishing out the ice cream, but I other than that, he made himself pretty scarce, and I was on my own.  But I gotta give him props.  He and Zachary cleaned my living room.  It looks amazing.  It hasn't been that clutter-free in two years.  Now it just needs to stay that way for the next two months.  I have a wedding shower and a baptism after-party to plan.  Yep.  The fun just never stops around here.  Please.  Somebody make it stop!  He he.  I'm just kidding.  You know I wouldn't have it any other way.  I did think that quitting my job, and school starting would calm things down a little.  Geesh.  I was pretty wrong about that.  At least I get some quiet during the day when the are gone.  Well, if I'm home any way. ;) 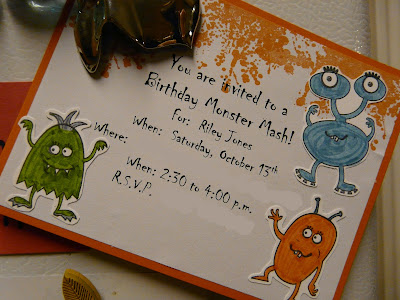 The invitations.  Riley and I made these together. 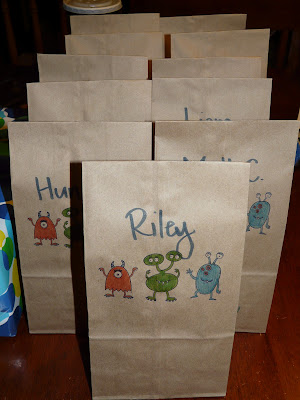 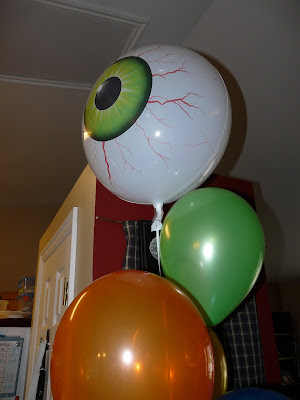 I couldn't find a monster balloon, so I went with an eyeball instead. 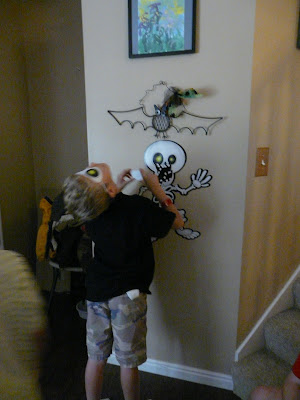 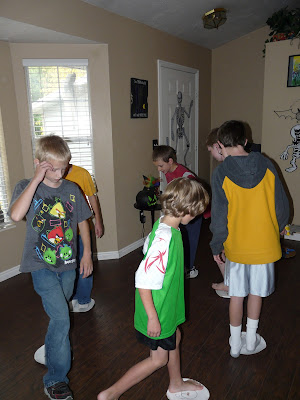 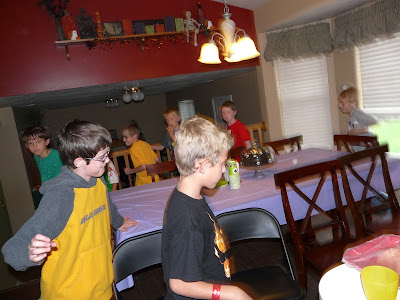 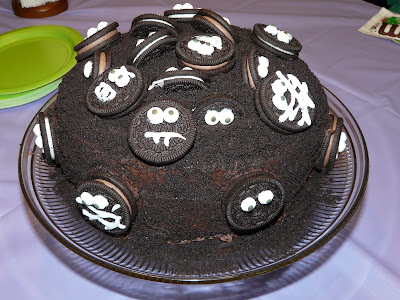 Check out the awesome cake I made!  I found the idea on Pinterest, and Riley picked it out.
The only thing about it I don't like is the frosting made the oreos go soft after a few hours. 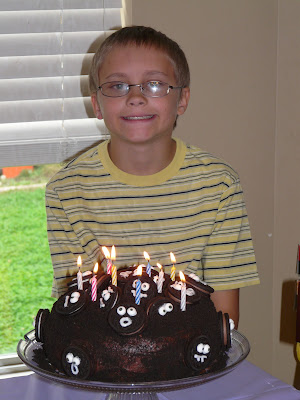 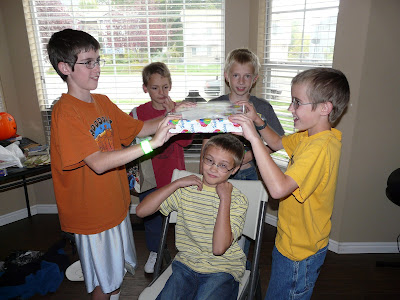 I can't believe these boys haven't ever played "Heavy, Heavy Hang Over."  What is this world coming to?

I ran out of batteries in the middle of presents, so I had to go to video.  I just have to show you Zachary's reaction to what Kurtis and I bought Riley for his birthday.  It's hilarious!

After watching that, I hope you don't have a headache.  Editing it gave me one. :P

Posted by sweetlissybug at 4:17 PM 3 comments: