In Which We Visit Brain World 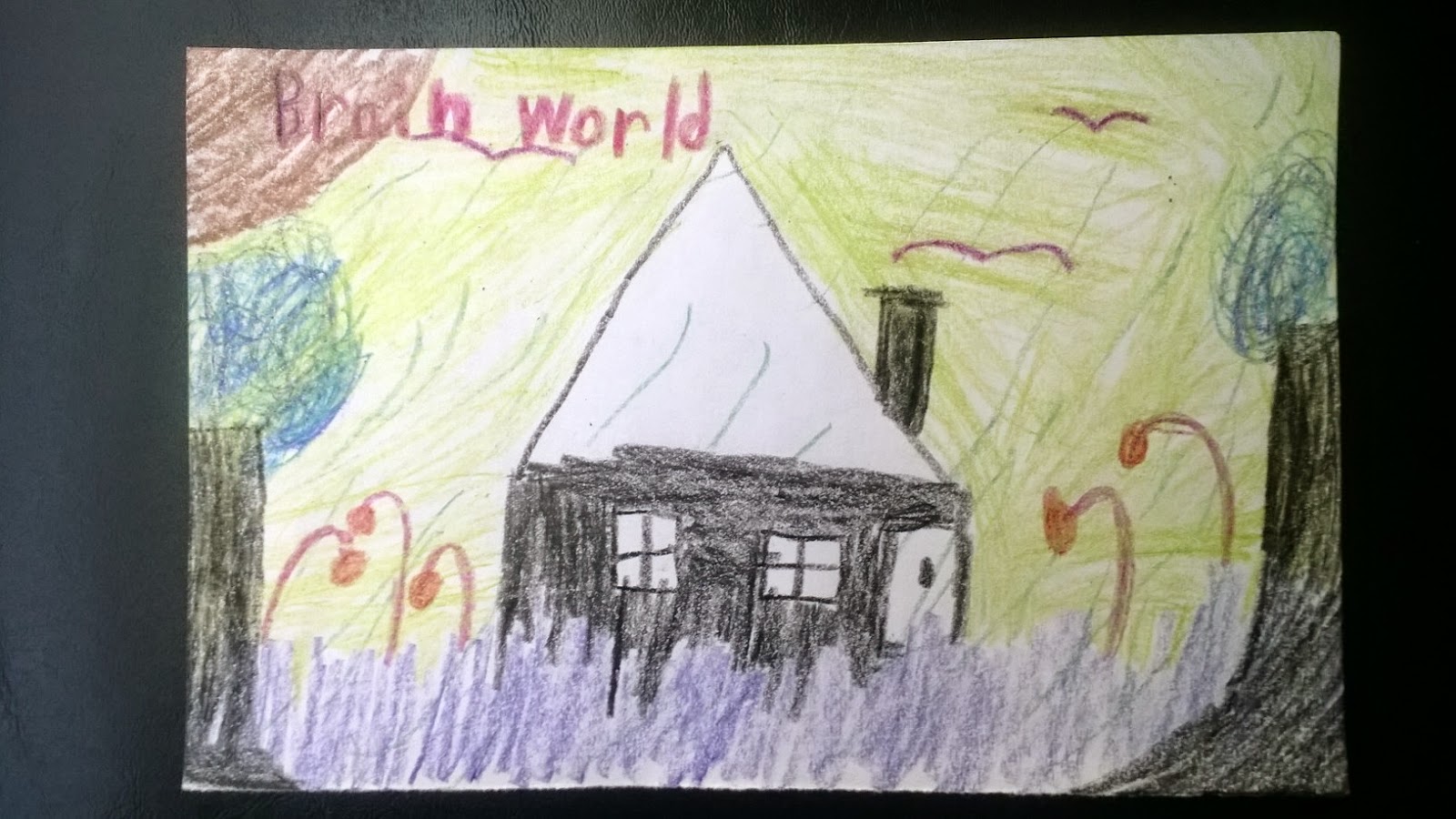 Sacrament Meeting Art #42: September 14, 2014.
Today, we have a guest post from Kaleb.  He wants me to tell you that this is a glimpse inside his brain.  It's called Brain World and in Brain World, the colors are all different.  The sky is green and the grass is purple.  Wood is black, not brown.  It's flippin' awesome is what it is!
Oh, and it's also raining in this picture. 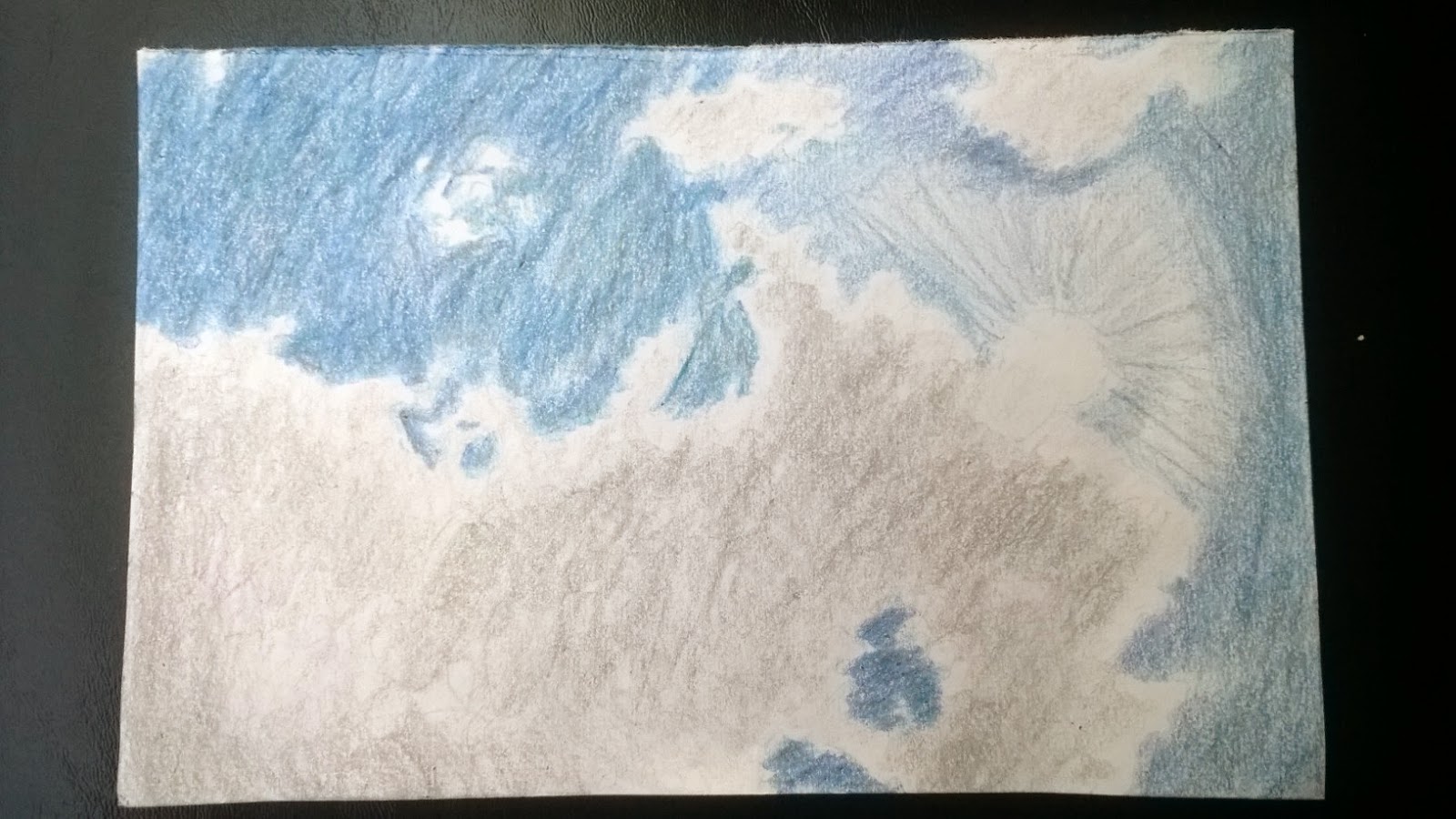 Sacrament Meeting Art #43: September 14, 2014.
When Rodney (my brother) posted the picture of the rocks, he also posted a picture of the sky with the sun behind a cloud.  I thought it would be a challenge to draw with crayons, and said I wanted to do it.  He approved, so here it is.  Finally.  It was a challenge.  I don't really feel like I did that great of a job on it either, but it's alright.  I also ran out of time, too (because I try to get them done before the closing song).  I didn't think that would happen. 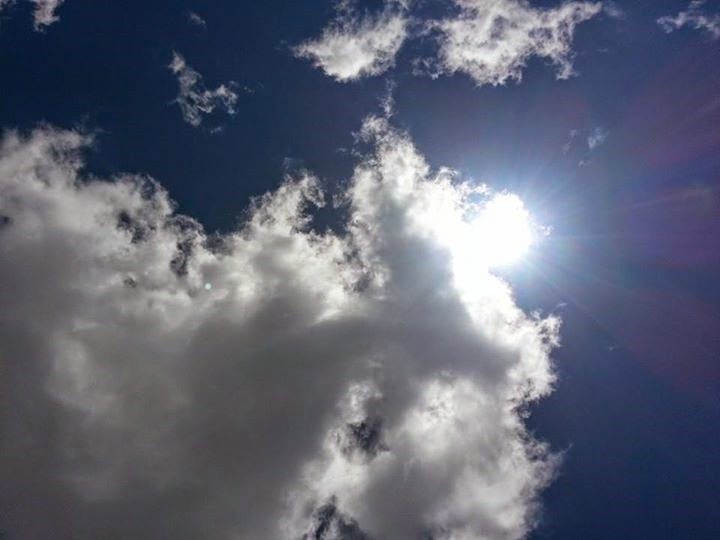 Oh, and P.S. My sister tells me that the picture I did last week is actually in Southern Utah as they drove out of Goblin Valley, so now we know. ;)
Posted by sweetlissybug at 5:34 PM 1 comment:

In Which We Celebrate 40 Years

I went to Comic Con over the weekend.  It was pretty epic and I have lots of pictures to show you, but not yet.  First I must tell you something else.
Thursday night (the first day of the Con), Kaleb was doing the dishes.  Somehow he had not noticed that there was a glass cup in the drain and turned on the garbage disposal.  I wasn't home yet, so Kurtis told me all about it after he picked me up. And I remember thinking, "I can't have any fun, can I?  Bad things seem to happen when I try to have fun."  This is only partly true.  It depends on the kind of fun that I try to have, it seems.  But I digress...
But you can imagine the consequences of such a mistake.  Kurtis tried to get all of the pieces of glass out - he got most of them, but his hand was too big to fit in the hole.  So I did my best to finish the job.
The garbage disposal seized up and we have been without one for a week.  But Friday, before leaving for day two of the Con, I called my dad.  He said he didn't think he could come down to help me fix it until the 20th, but it turns out they could come help me this morning.  I am so grateful for that.  Seriously.  Kurtis had put the square bucket I use to keep my cleaning supplies in the sink and was making the kids dump the water out in the toilet when they were done doing the dishes.  I hated it.  Mostly because he also wouldn't let the kids put the dirty dishes in the bucket.  They had to go on the counter next to the sink, and that made it hard to find a place to cook dinner.  It was a whole thing.  I'm just glad it's over. ;)
When my parents came over this morning, they got right to work, and we discovered there is a reset button on my garbage disposal (I couldn't find it, but it's on the bottom).  We tried that first.  It didn't work.  So we used his tool that came with his garbage disposal and he got the blade to spin again.  And now it works!  We could hear a little piece of glass still spinning around in there, so I put my hand in it to find it.  My hand got cut, but I didn't pull anything out.  It's funny to me that I cut it today, but not at all when I was pulling bigger pieces out.  We knew it was still in there and then we could hear it while we used one of my garbage disposal cleaning things to test out the mechanism.  It sounded like it had fallen into the compactor and my dad felt that it was small enough that it would go through the pipe soon.
Before they left, I had to give them their anniversary present!  On September 5, 1974, my parents were married in the Salt Lake Temple.  They have now been married for 40 years!  My siblings and I think that is pretty cool.  So at the beginning of the year, I asked what we should do for them and we had a few ideas, but they didn't feel right.  Then the year went on and I forgot about it for awhile.  Then in July (I think), I went on Pinterest and went looking.  Someone posted that their kids had written 40 things they had learned from their parents over the years and I thought that sounded perfect.  So I finally emailed my siblings on the Sunday before their anniversary.  They all thought that was a great idea.  I said that because my parents had 8 children, if we all did it, we would only have to come up with 5 each.  Only one sibling declined to participate, so a few of us came up with a couple extras.
I almost forgot to give it to them while they were here, but then I saw it on the counter (I forgot to take a picture of it!), I was like oh! I must give you your present!
They loved it!  They sat down and read it together.  I took a few pictures of them reading it (because I left my video camera downstairs.  I meant to get it before they came, but they forgot to text me when they were on their way here).  Michele, the first thing you wrote, made mom break down in tears. It was awesome.  Some made her laugh and some made her cry, but they loved them all.  Thank you for participating in this.  It means a lot to them and mom said she would keep it in a special place.  Here is a great quote from Mom: "These are happy things! Why are they making me cry so much?"  I said, "So many feels!"  I don't think she got it, but that's okay.  ;) 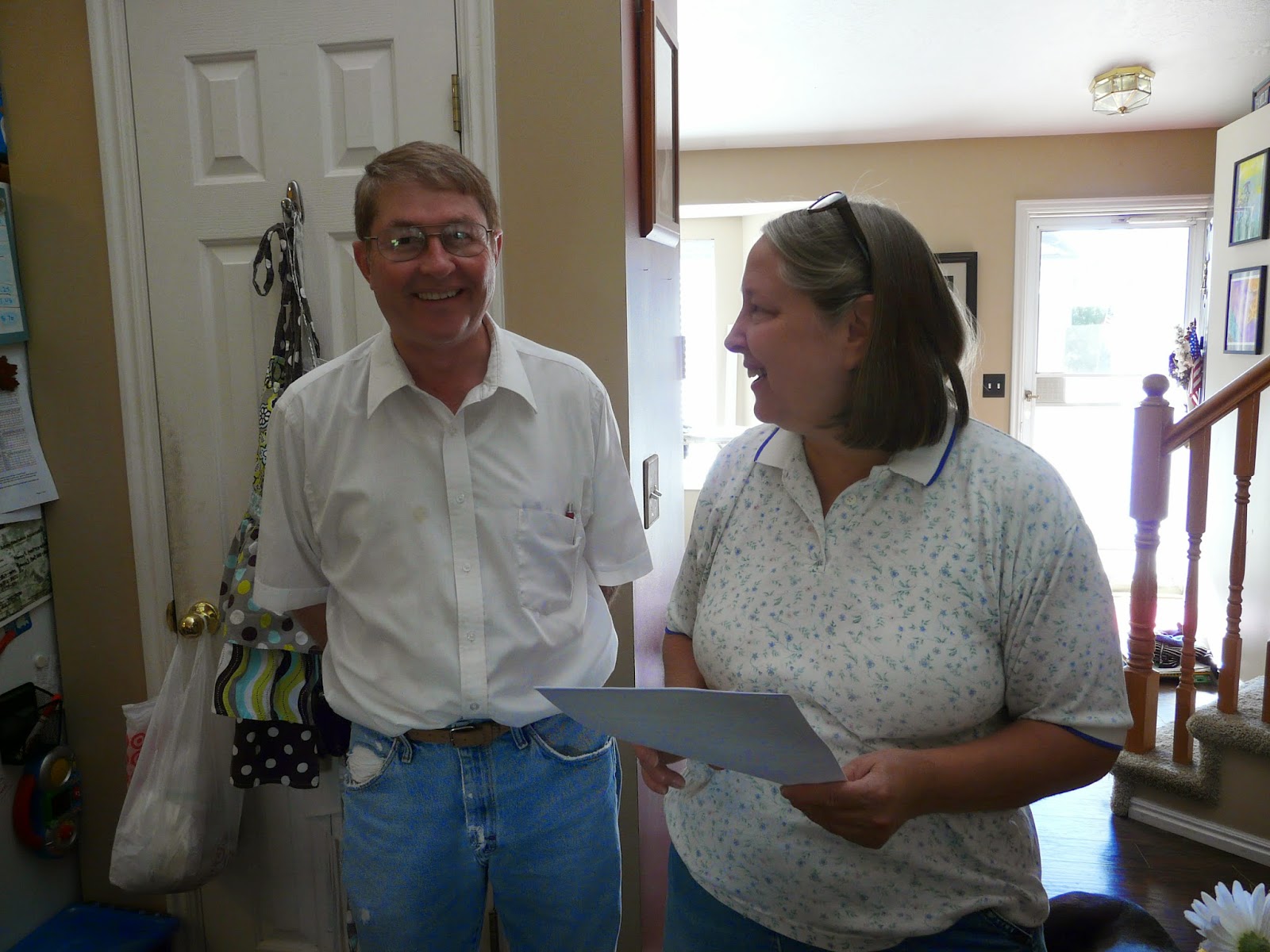 After I gave it to them, my mom requested a box of tissues while she read it. 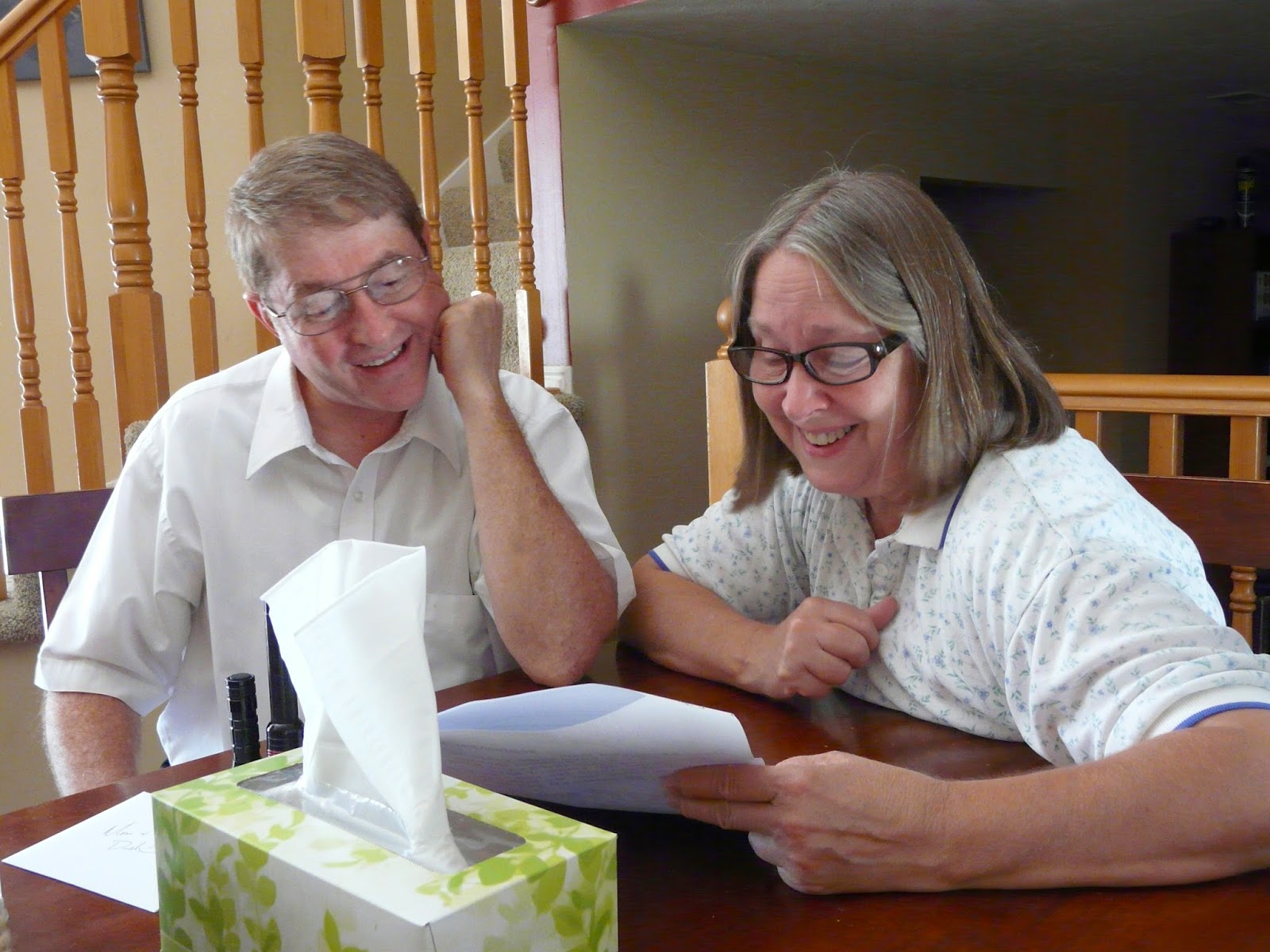 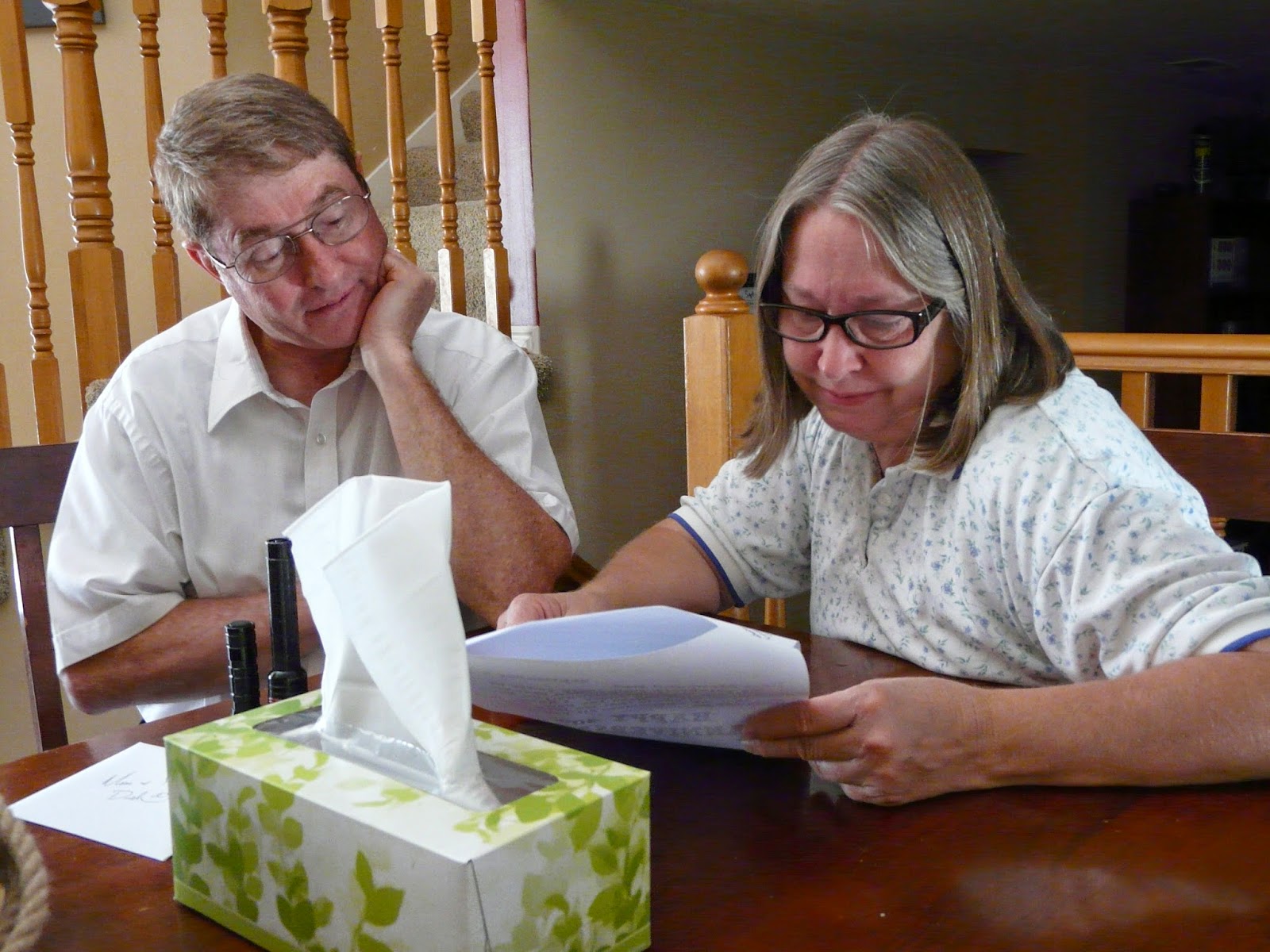 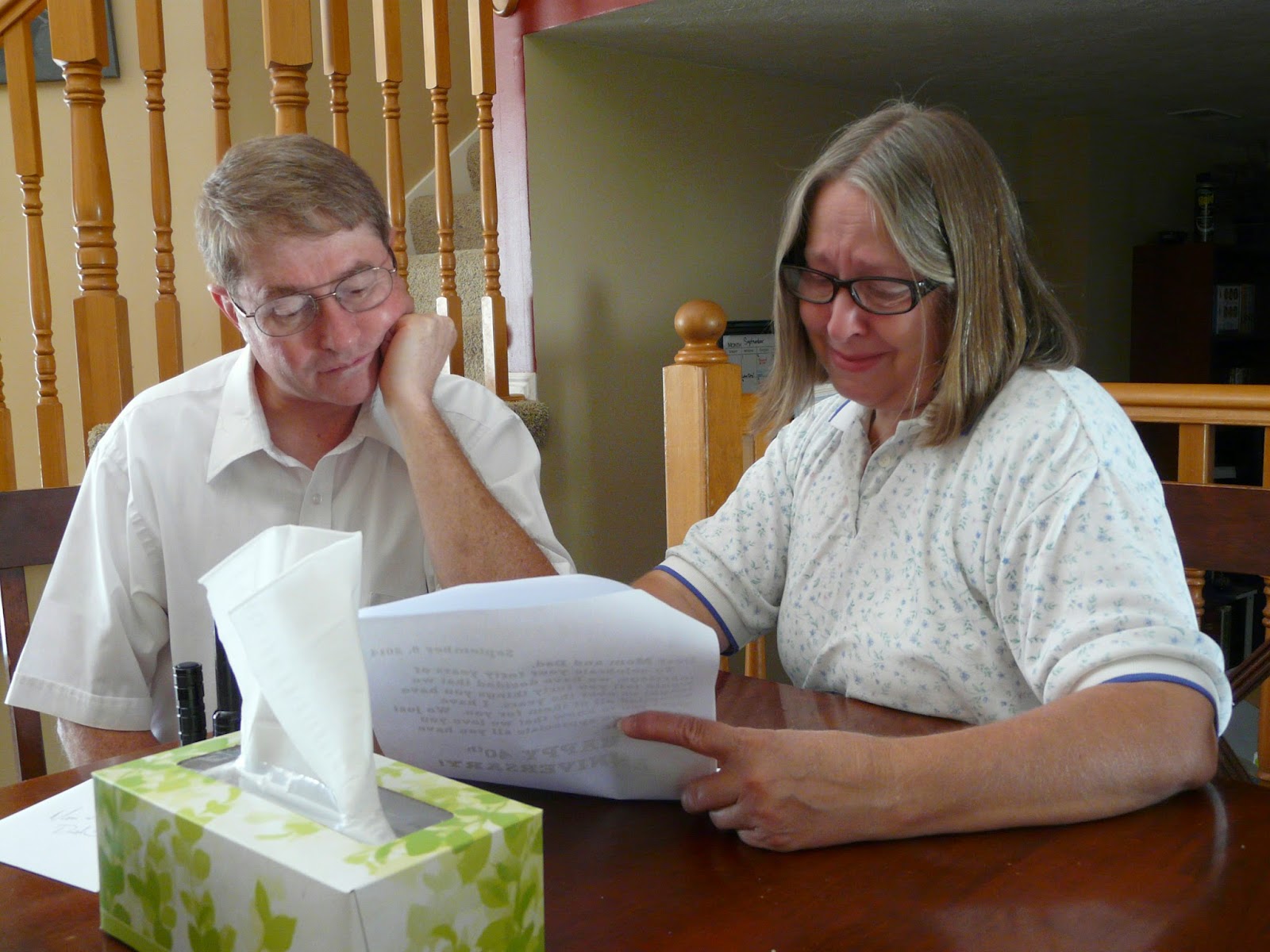 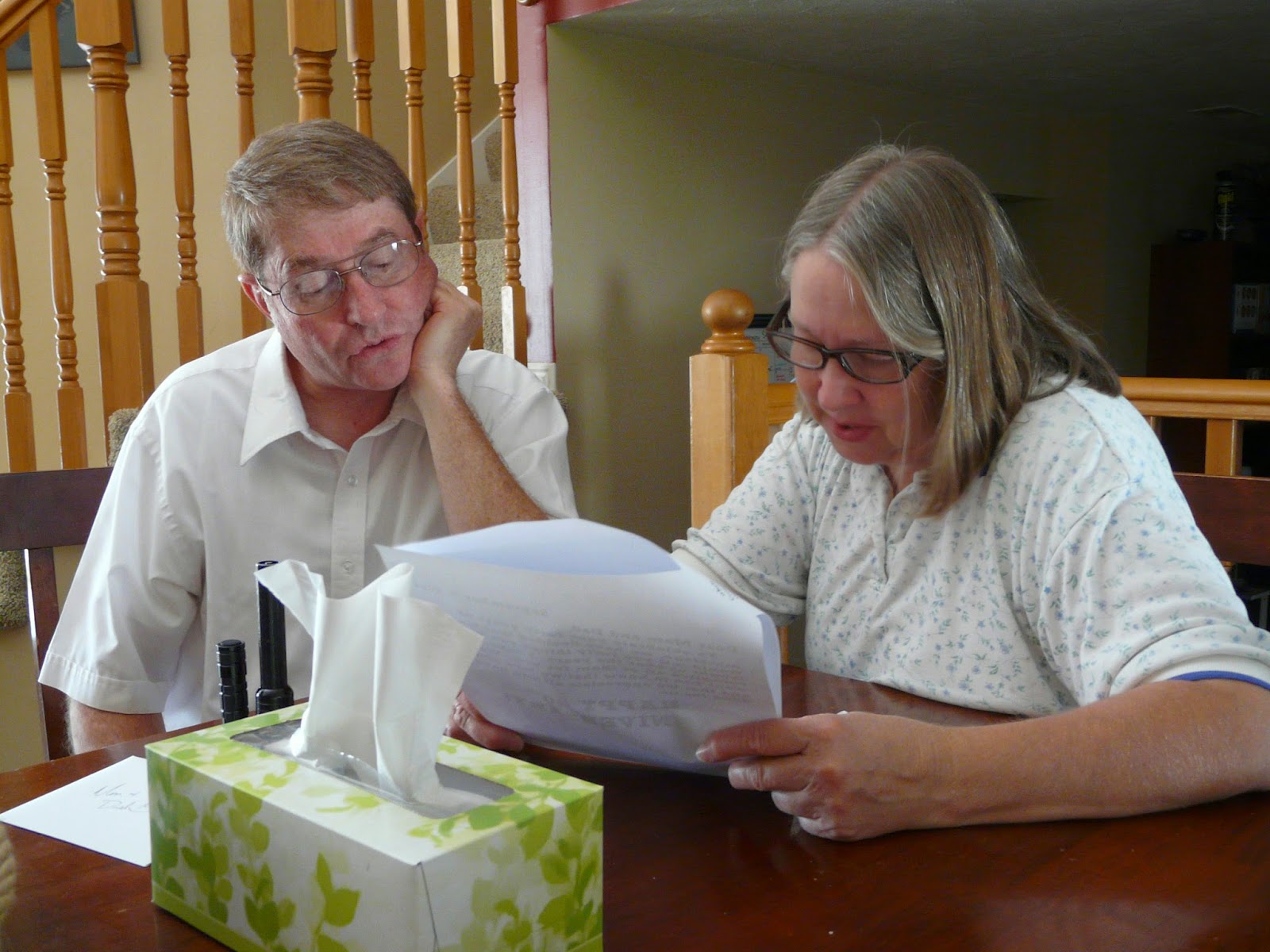 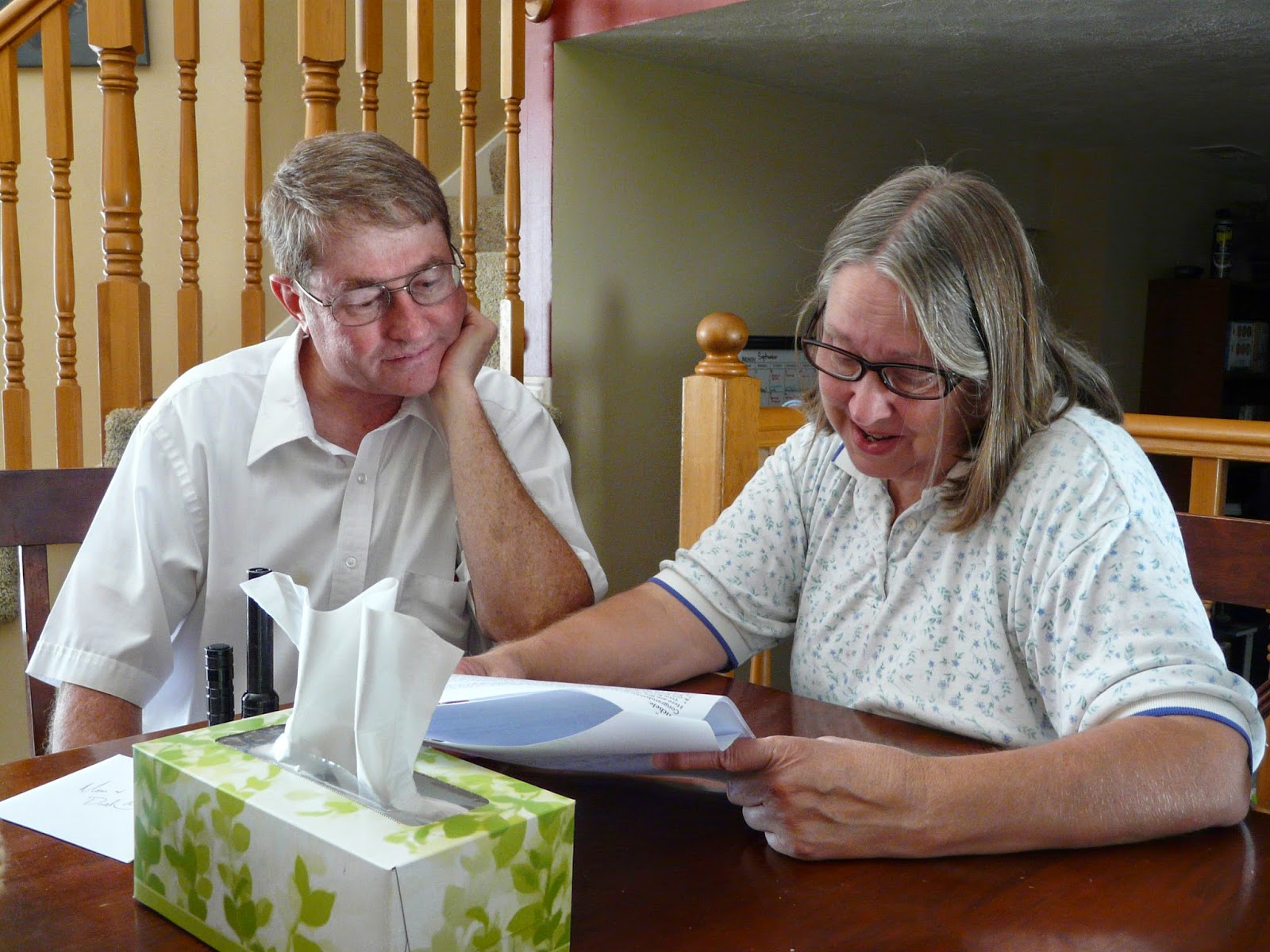 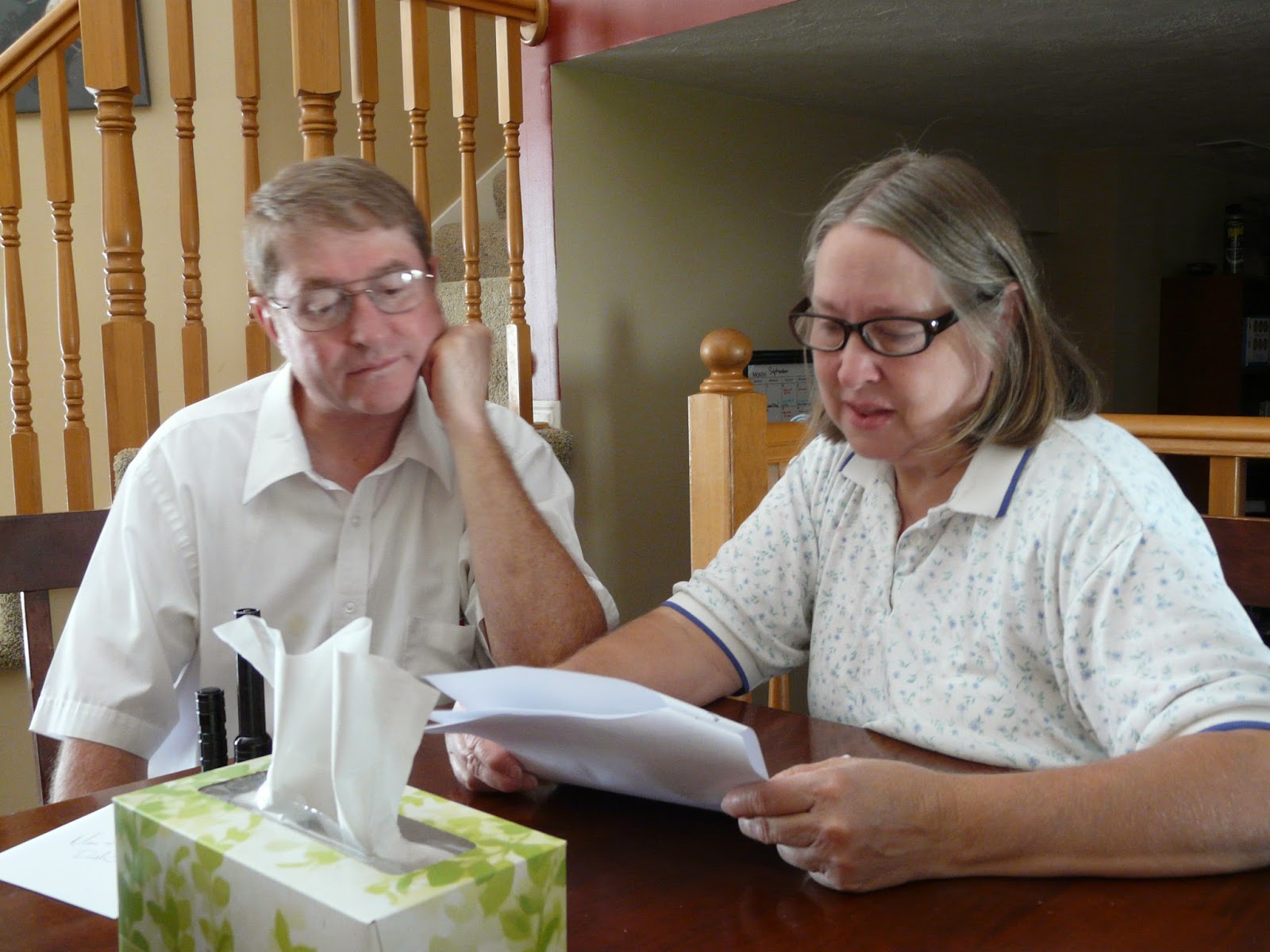 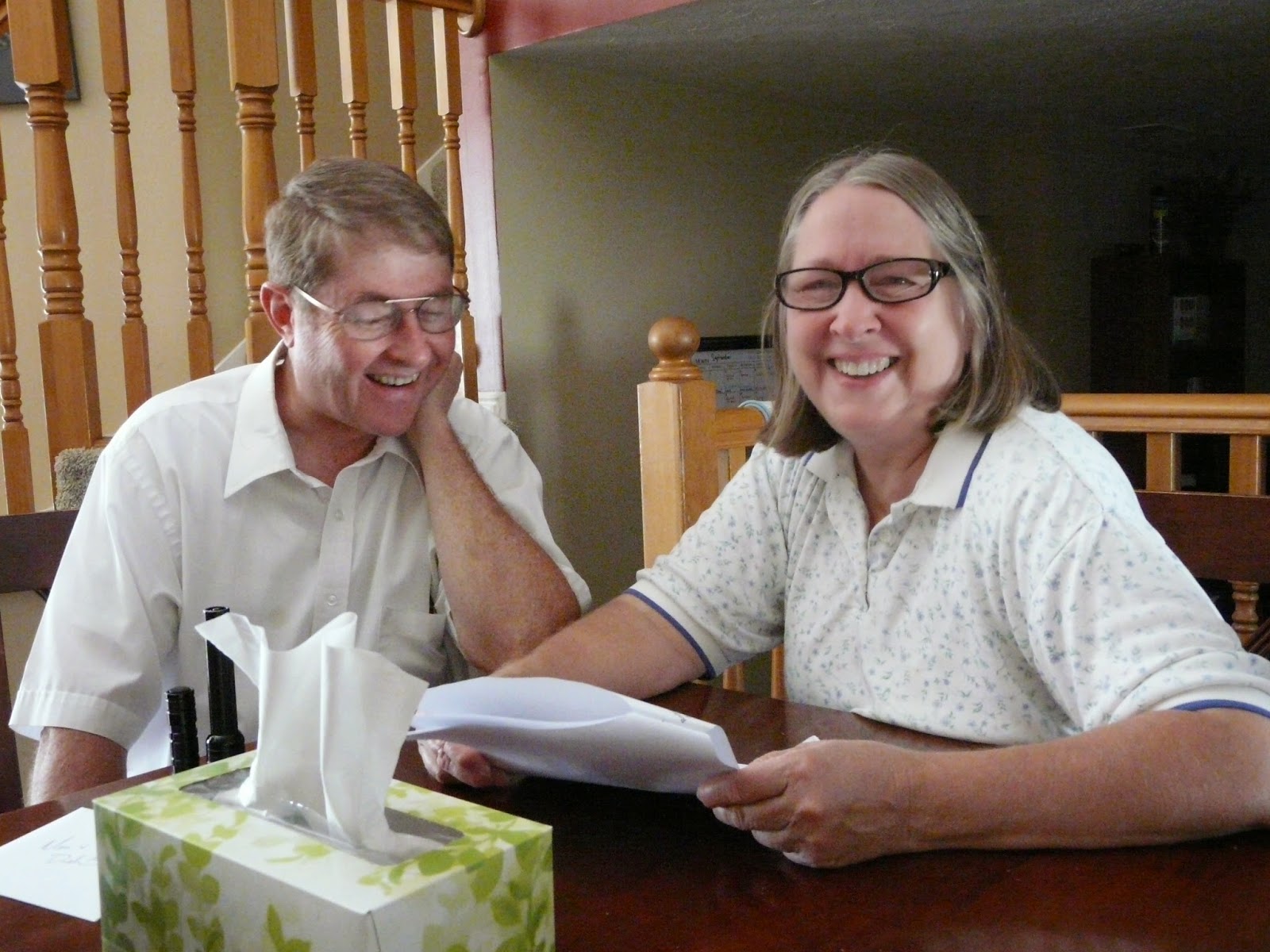 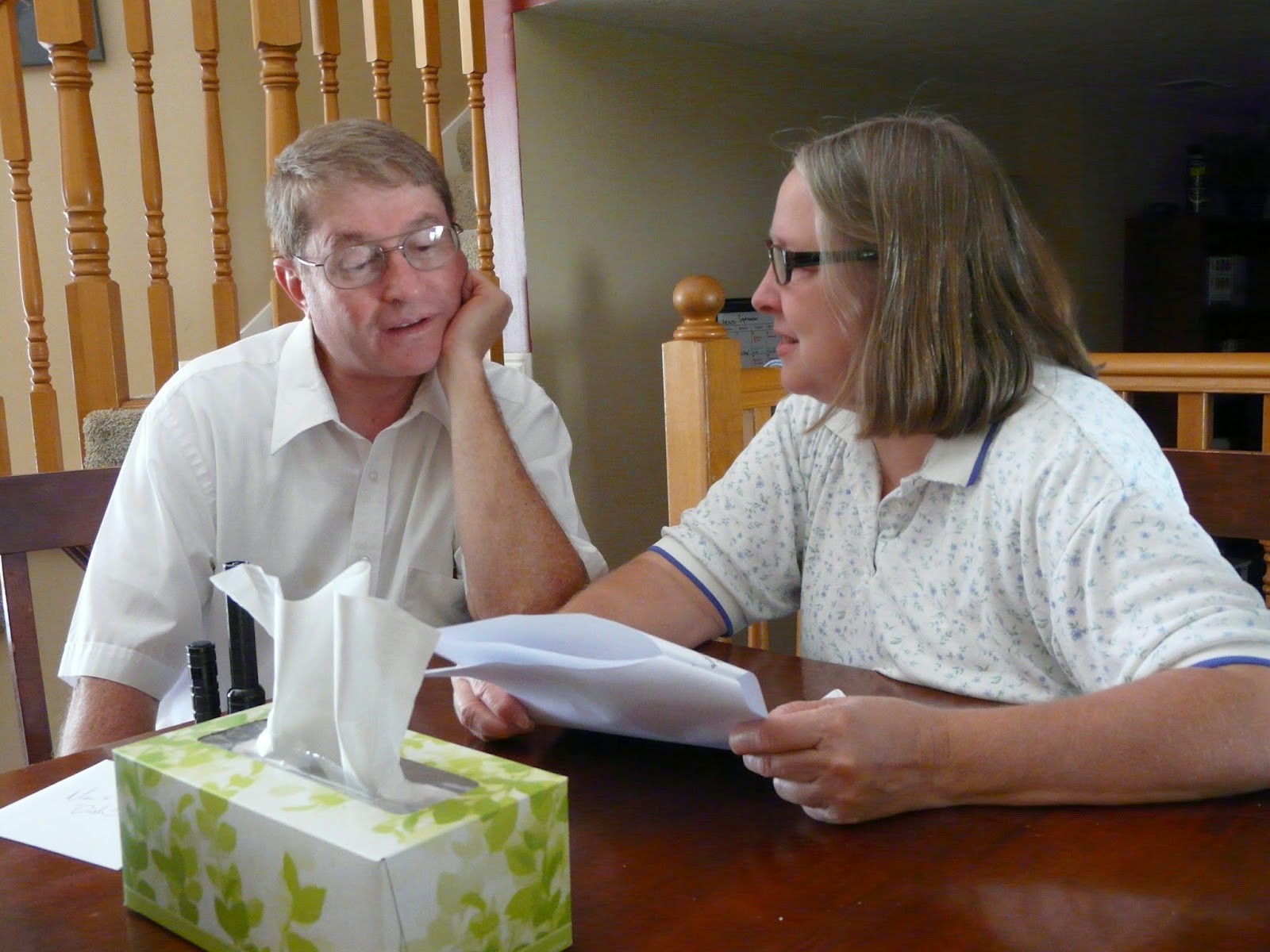 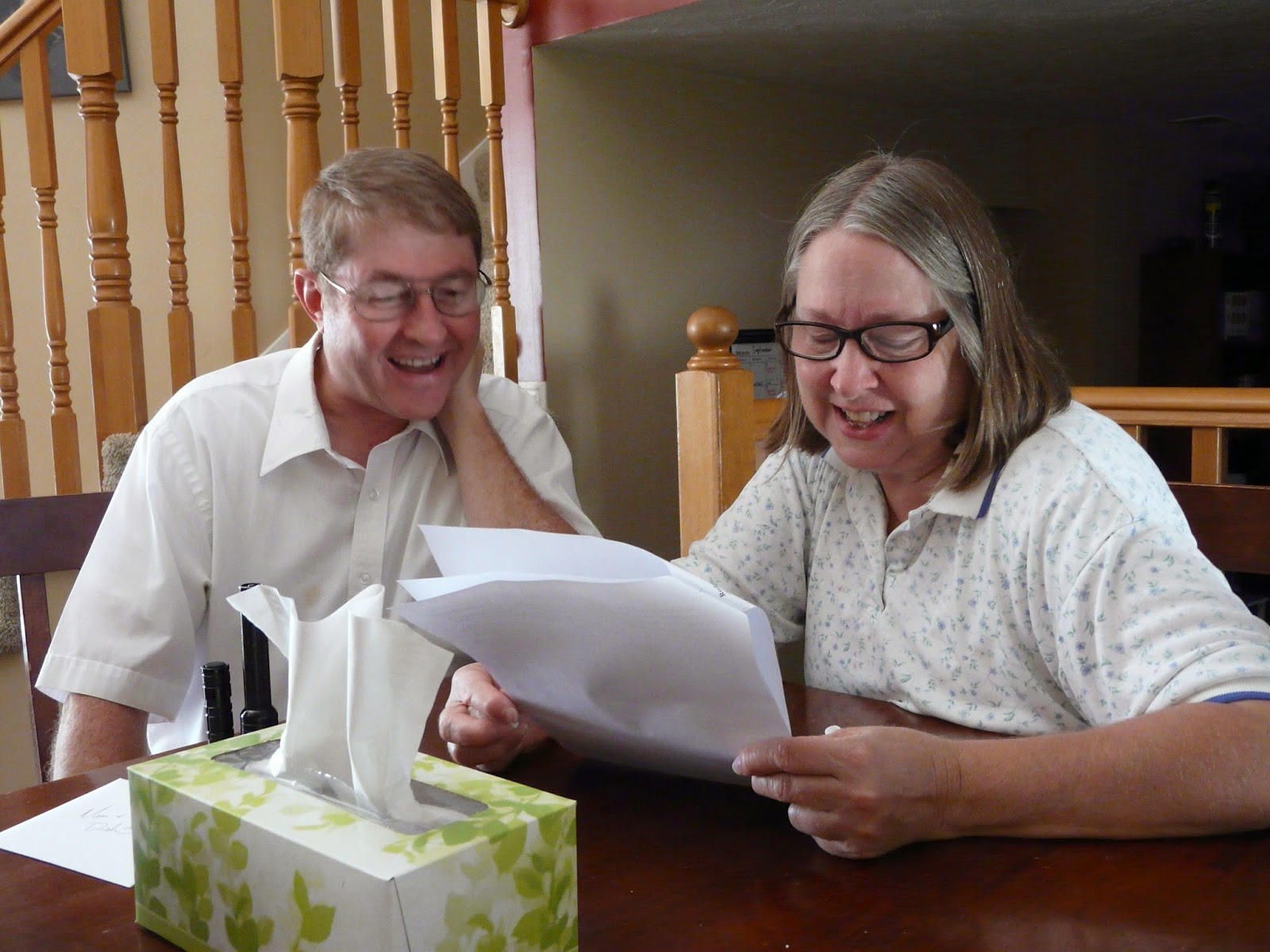 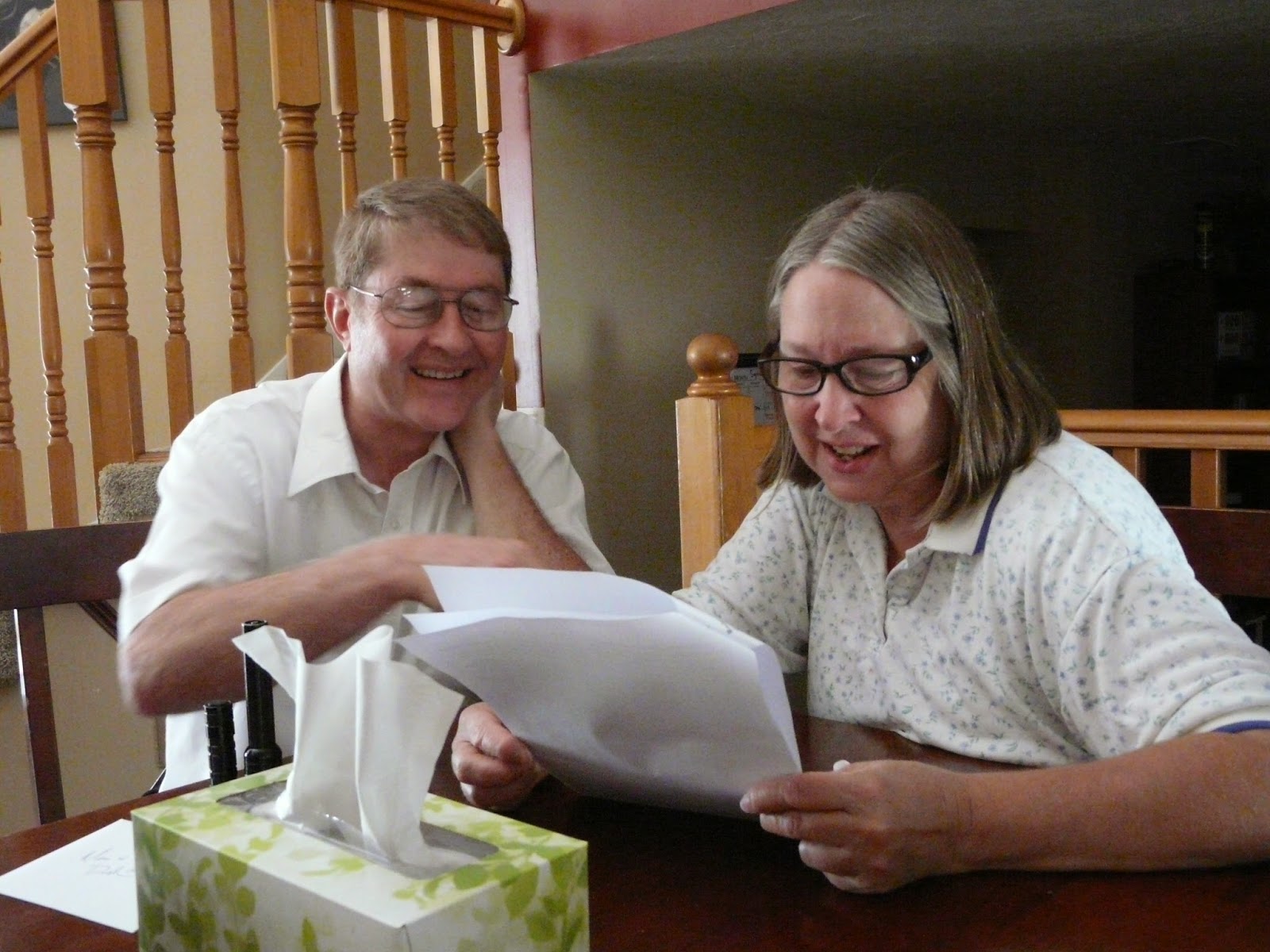 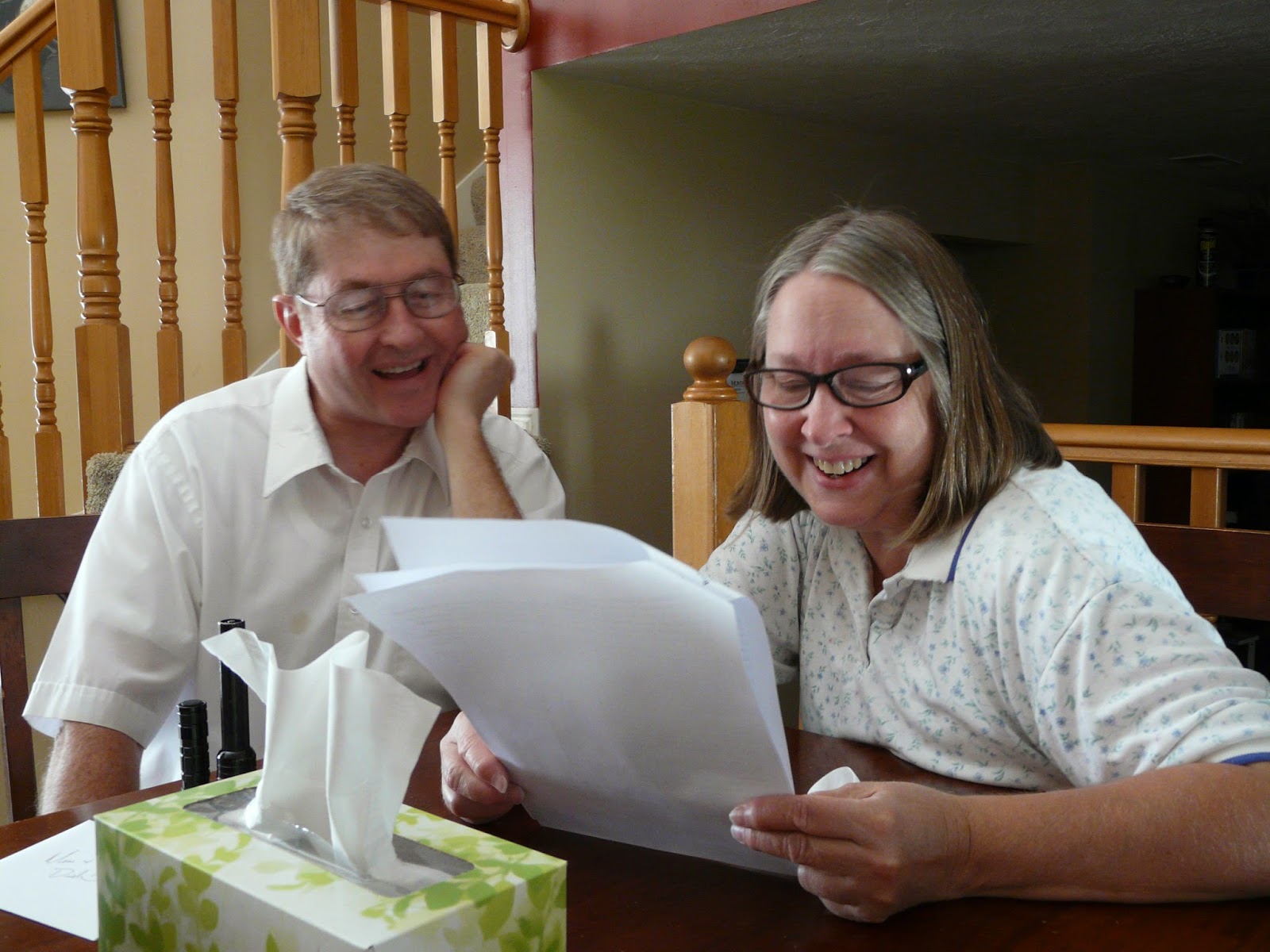 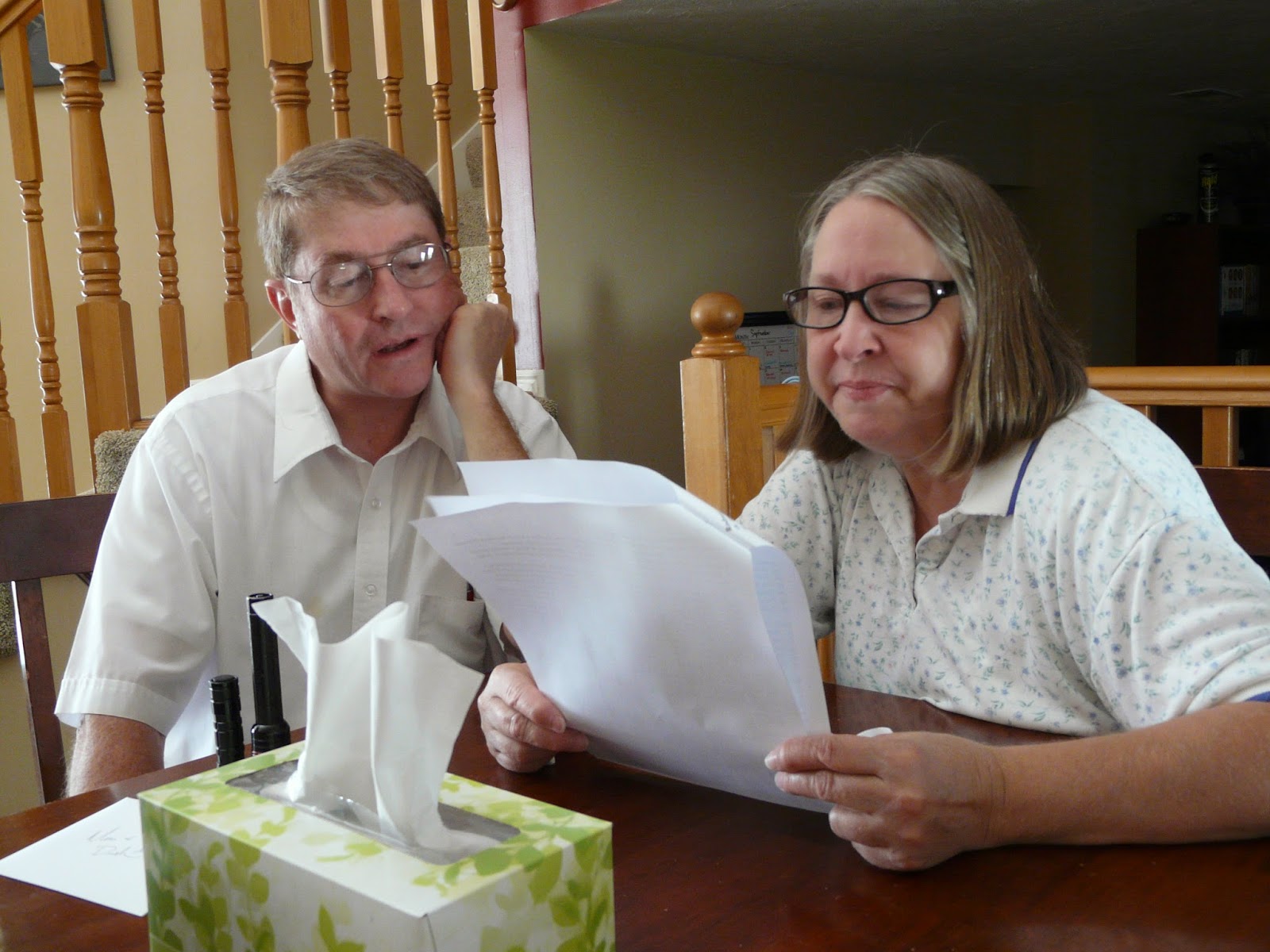 I know that's a lot of pictures, but I couldn't decide which ones were best.
I thought they were all wonderful.

After they left, I was so excited that I had a garbage disposal again, that I had to try it out.  It sounded like the glass piece that was in the bottom had somehow come back up, so I fished around, and found it.  Now it works perfectly and does not sound like something is stuck in it.  Hooray! 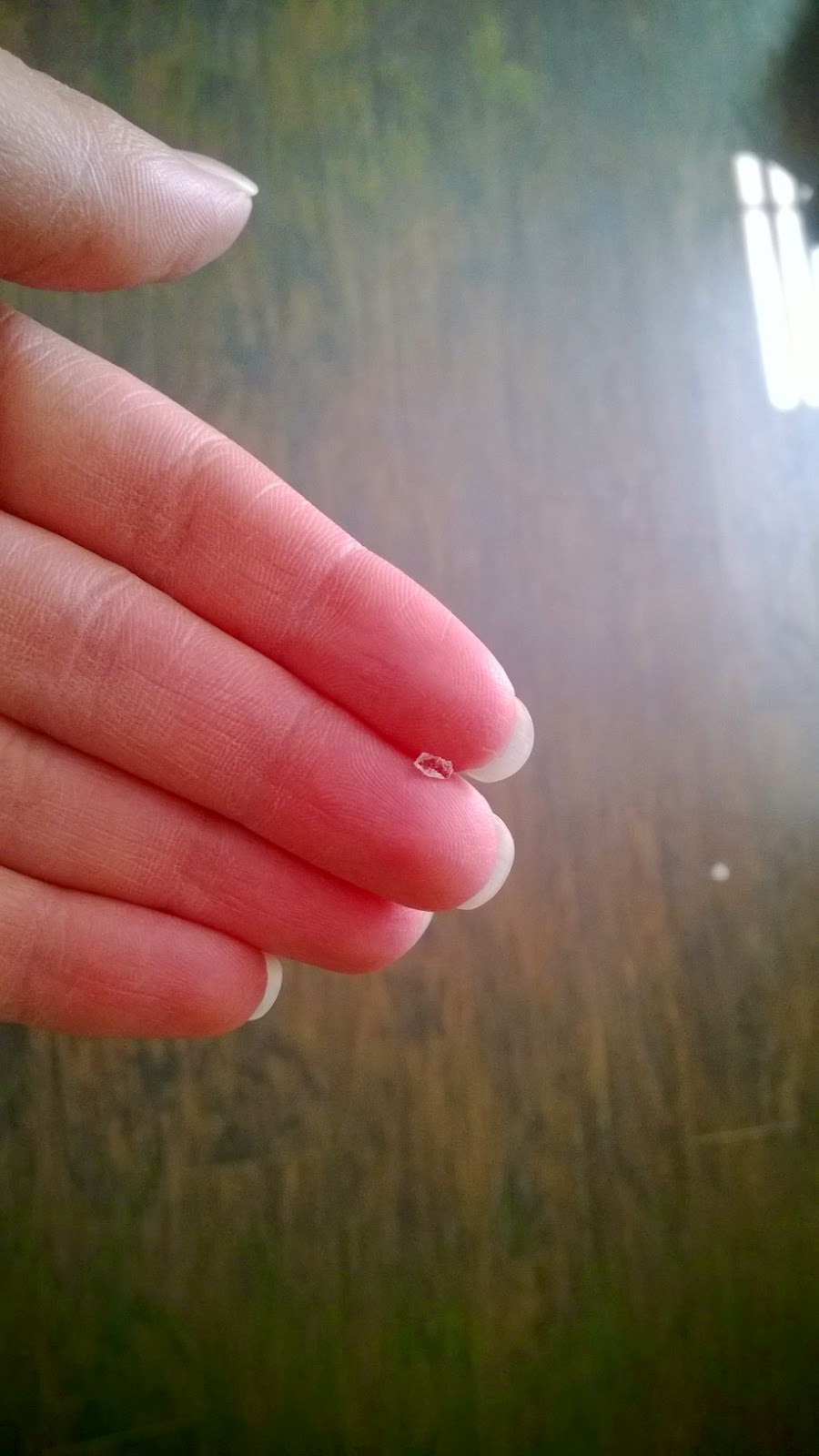 Such a tiny piece of glass creating so much havoc!
Posted by sweetlissybug at 12:30 PM No comments:

In Which We Love the Open Road 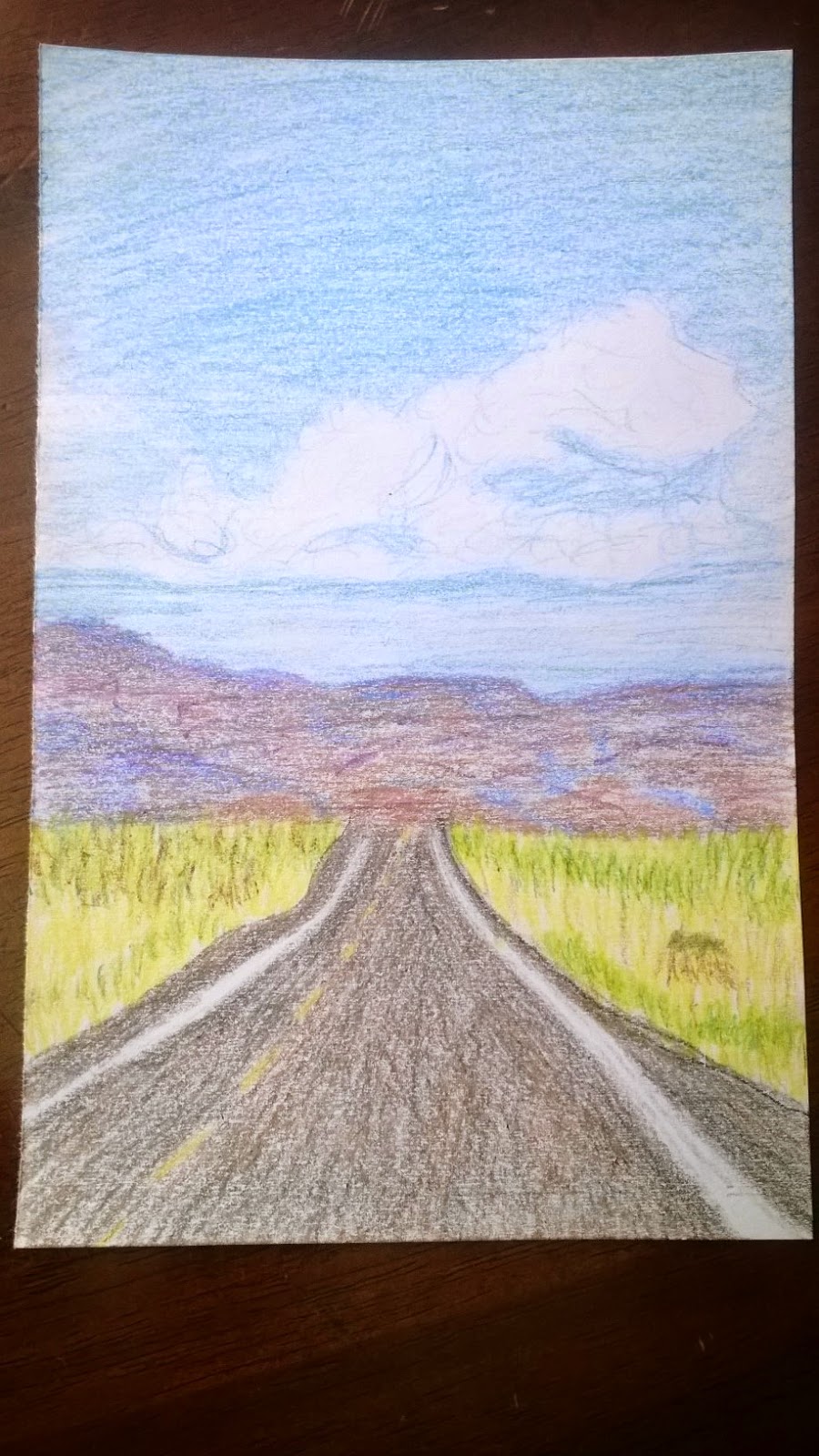 Sacrament Meeting Art #41: September 7, 2014.
This is a picture my sister took while she and her family were on a road trip to Utah.  I'm pretty sure this is in Colorado, but I need to check.  Hang on...
Well, she doesn't say specifically, but it is.  I know Colorado.  I've been there before. ;)  So if it isn't, comment and let us know, Sista!
But anyway, I read her blog, loved the photo and said, that's going to be my next Sacrament Meeting Art piece.  I cropped it a little though.  It had to be done to fit the page I was coloring on.  I use half a sheet of 8 1/2 x 11" paper. 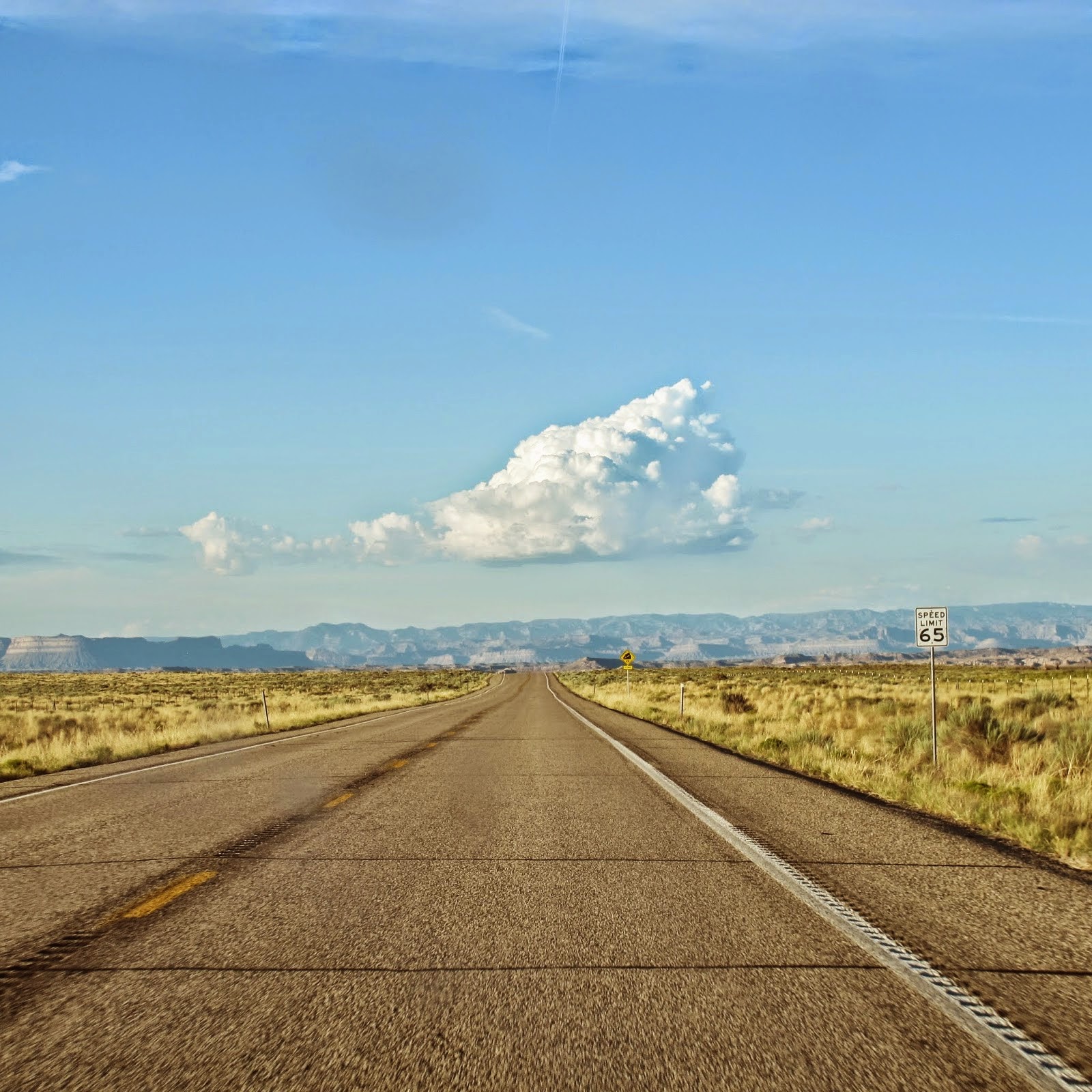 Posted by sweetlissybug at 7:39 PM No comments: