In Which The Sun Sets In the West

Let me be clear.  I don't find church boring.  I'm not doing this project because church is boring.
I'm doing this because it helps me focus and keep my mind from wandering while I listen to the sermon.
That way, I get more out of it and I can feel the Spirit the speakers bring to the meeting. 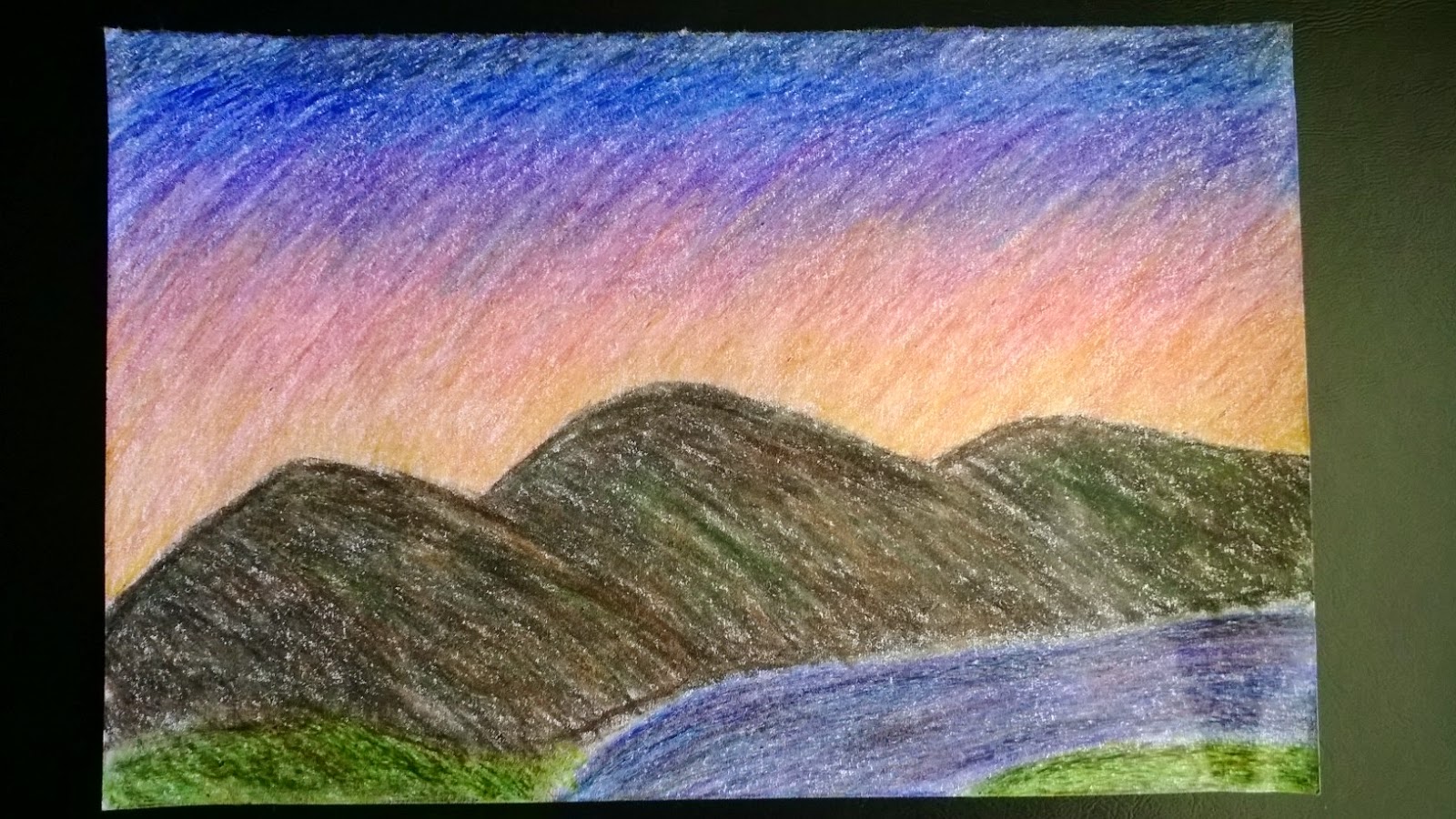 Sacrament Meeting Art #33:  June 29, 2014.
There's something about evening that I just love.  Perhaps it is because I usually sleep through the sunrise, but I love to look up into the sky as the sun sets.  The splendor of the night sky is breath taking.  I really love the way this one turned out, too.  Often I think, I should do a sunset.  Then I think, but I just did a sunset.  I don't want them all to be the same.  But as I'm looking over all the Sacrament Meeting Art work in my Facebook album, I am realizing I have only done one other sunset.  So I think I will do them more often.  Not all the time.  Just more often.

Oh, and Zachary stayed home from church today because while he was at scout camp last week, one of the boys in his tent had a cold.  He was fine when he got home, but by the end of the day, he was bashed over the head with it.  Poor guy.  At least he had a blast while he was there.  I am glad he gets to have that experience.  But because of that, he didn't draw us anything this week.
Posted by sweetlissybug at 6:30 PM No comments:

In Which There Are Comings And Goings

Well, my friends, have I got a treat for you today.  He he.
Today, I went to two Sacrament meetings.  That's right.  Two.
My cousins who also happen to have been born on the same day within minutes of each other, have decided to serve the Lord as missionaries for the Church of Jesus Christ of Latter Day Saints.  They have both been assigned to serve in Japan.  They are also Japanese-American and already speak the language.  They have an advantage over those who do not, and probably will not have to spend as much time in the missionary training center (or MTC in Mormon-speak) as those who do not.
Holding to tradition in this church, they were asked to speak to their congregation before they leave.  And after listening to their talks, they will do well.  They are ready.  They were beautiful messages and the Spirit of God was present there. 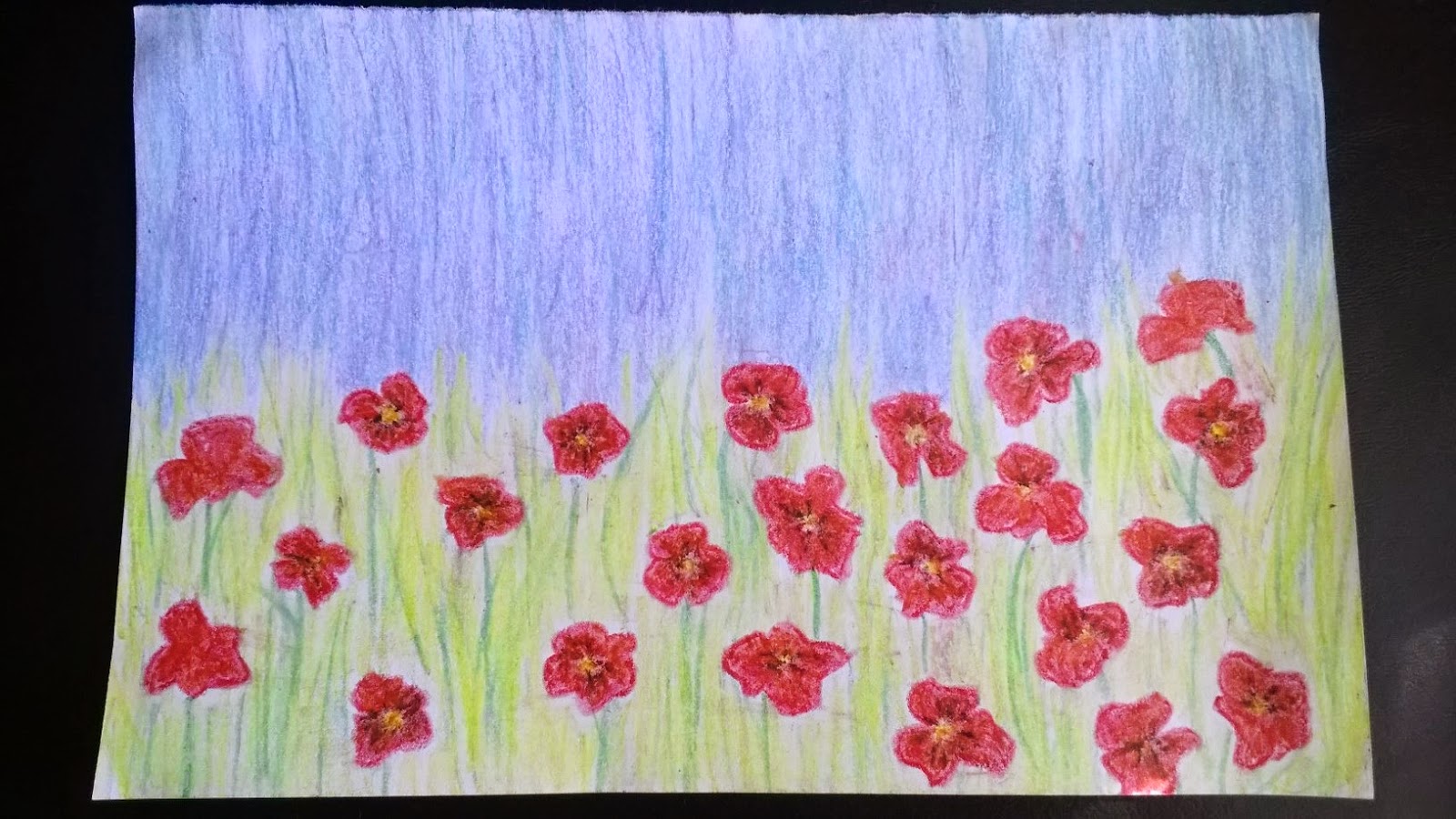 Sacrament Meeting Art #30:  June 22, 2014.
It's a field of poppies.  I have a friend who takes amazing pictures and posts them on Instagram.  This one is inspired by one of her pictures.  It's not the same, nor does it do justice to the actual photo at all, but I do love poppies.

I also have another cousin who returned from his mission in Canada on Thursday last week.  After Spencer and Jason spoke, we went to listen to my cousin Johnathan do the same.  Because it's also tradition to have the missionary who returns speak to the congregation about what he learned.  His talk was also wonderful and the Spirit of God was also present. 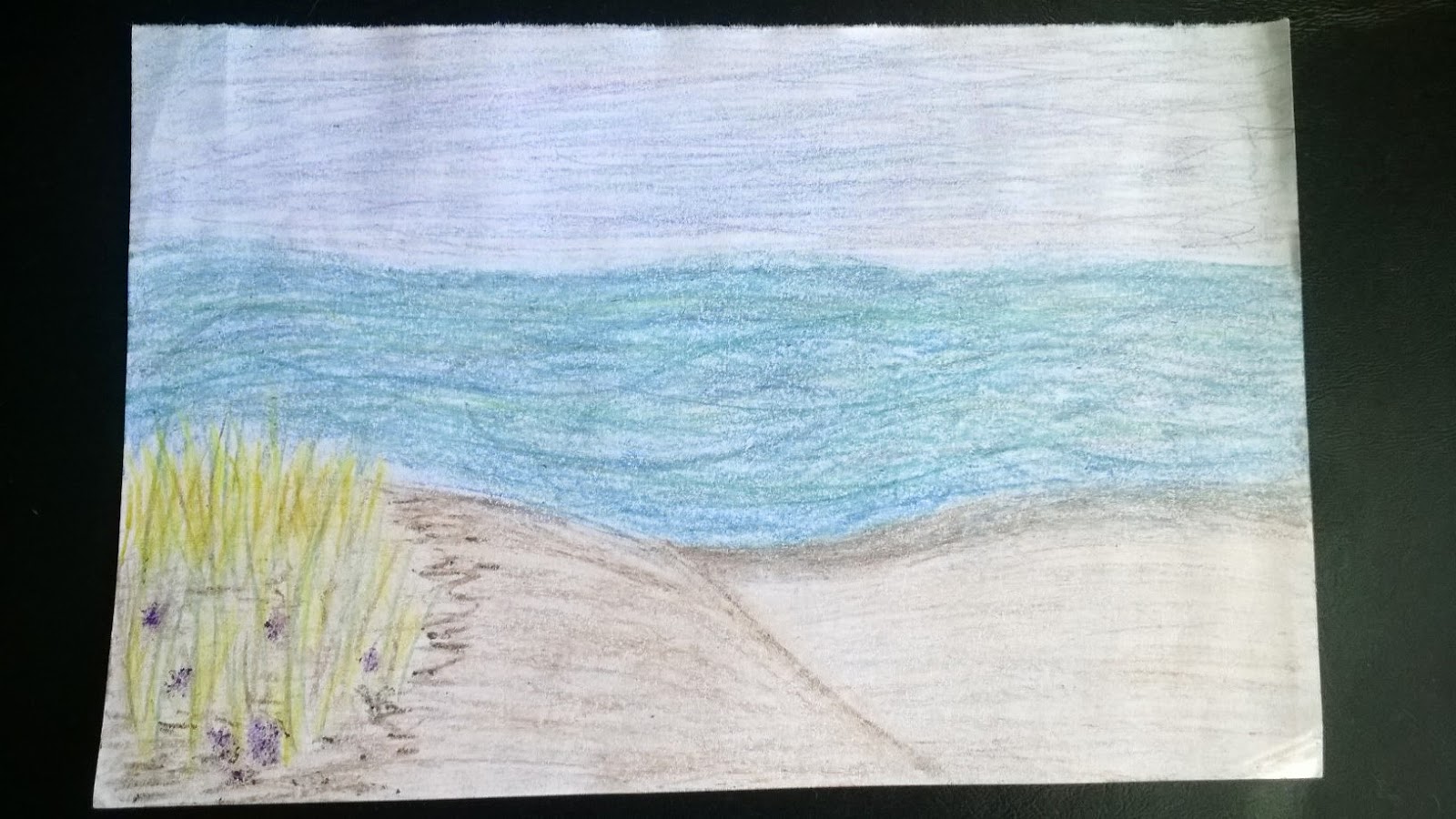 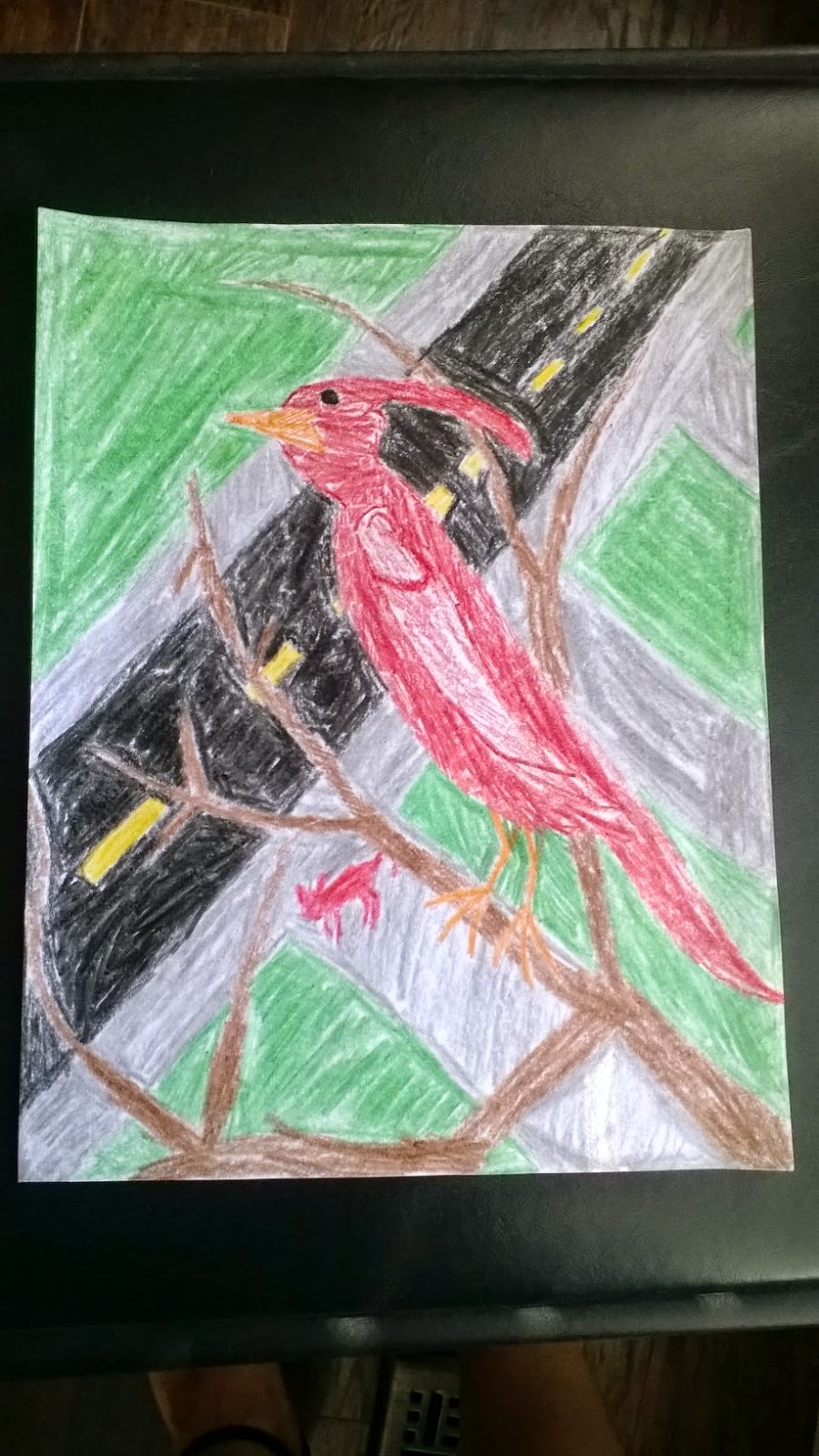 Sacrament Meeting Art #32:  June 22, 2014.
I told you I had a treat for you.  We also have a special guest artist today.
Zachary drew this during Johnathan's talk today.  He wanted me to share it with you.

I hope you had a wonderful day.  I love you all so much.
Posted by sweetlissybug at 12:00 AM No comments:

In Which This Blog Post May Have Too Much Going On

We had a pretty good weekend.  I hope you did, too.
Saturday, we helped my sister move into her new apartment.  I was surprised that we were done so quickly, but then again, there are only two people in her family right now.  They really didn't have that much stuff.  You know.  As apposed to two adults with three children who have waaaaay too many toys.
Sunday was Father's Day and we just went to church.  Then I took a nap.  I saw my dad while we were moving and gave him his present Saturday.  I got him so root beer in the glass bottles and a chocolate bar.  He loves root beer.  Kurtis told me he wanted some books for his Kindle, so Friday, he got those, but Sunday I gave him his card and made him his favorite dinner. 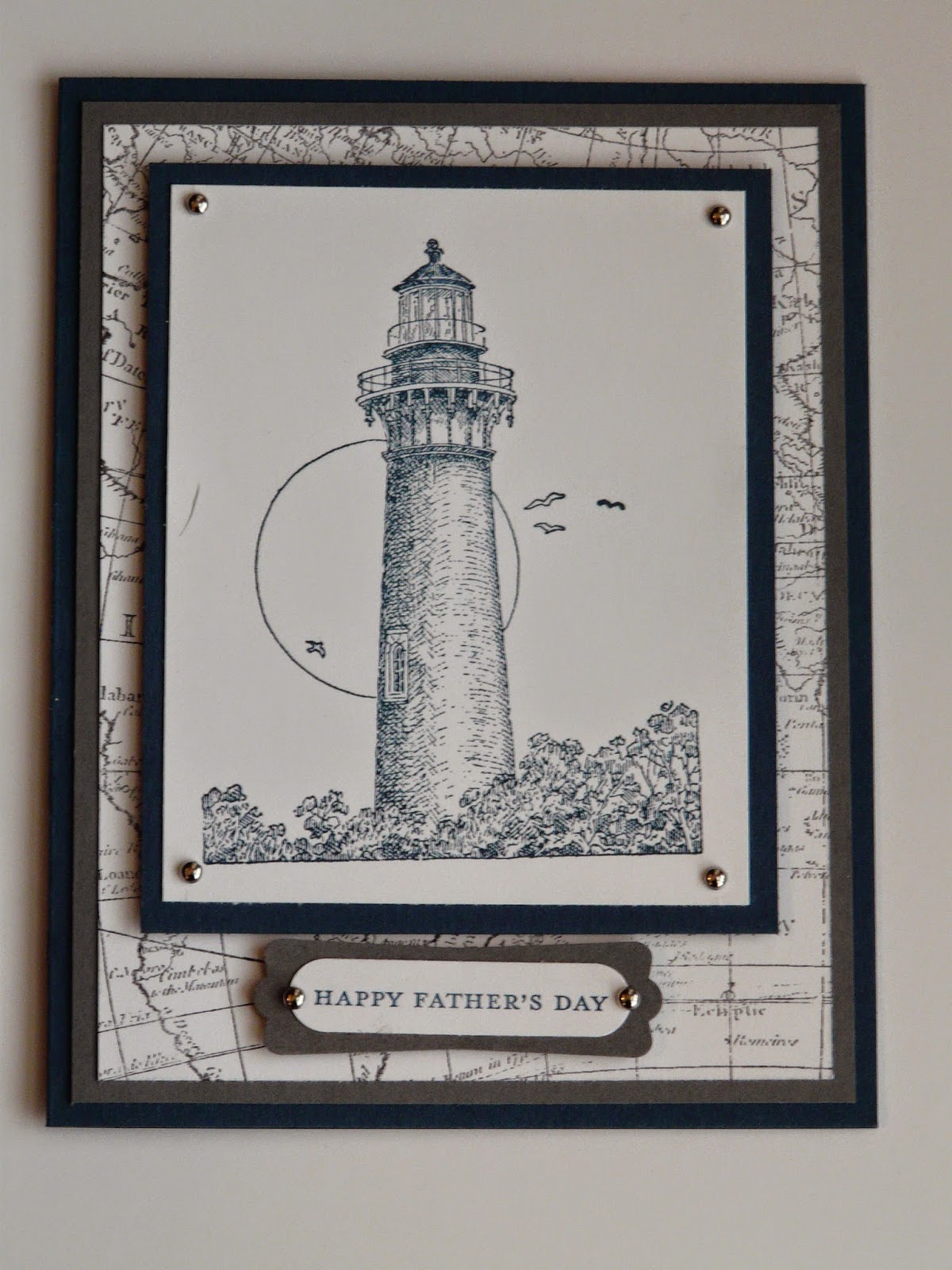 Here's the card I made for my dad and for Kurtis (Yep.  I make the same card for both of them.  Yep.  They are okay with it.  I do the same thing for our anniversary and my parents' anniversary).

But today was really, really awesome.  Because this happened: 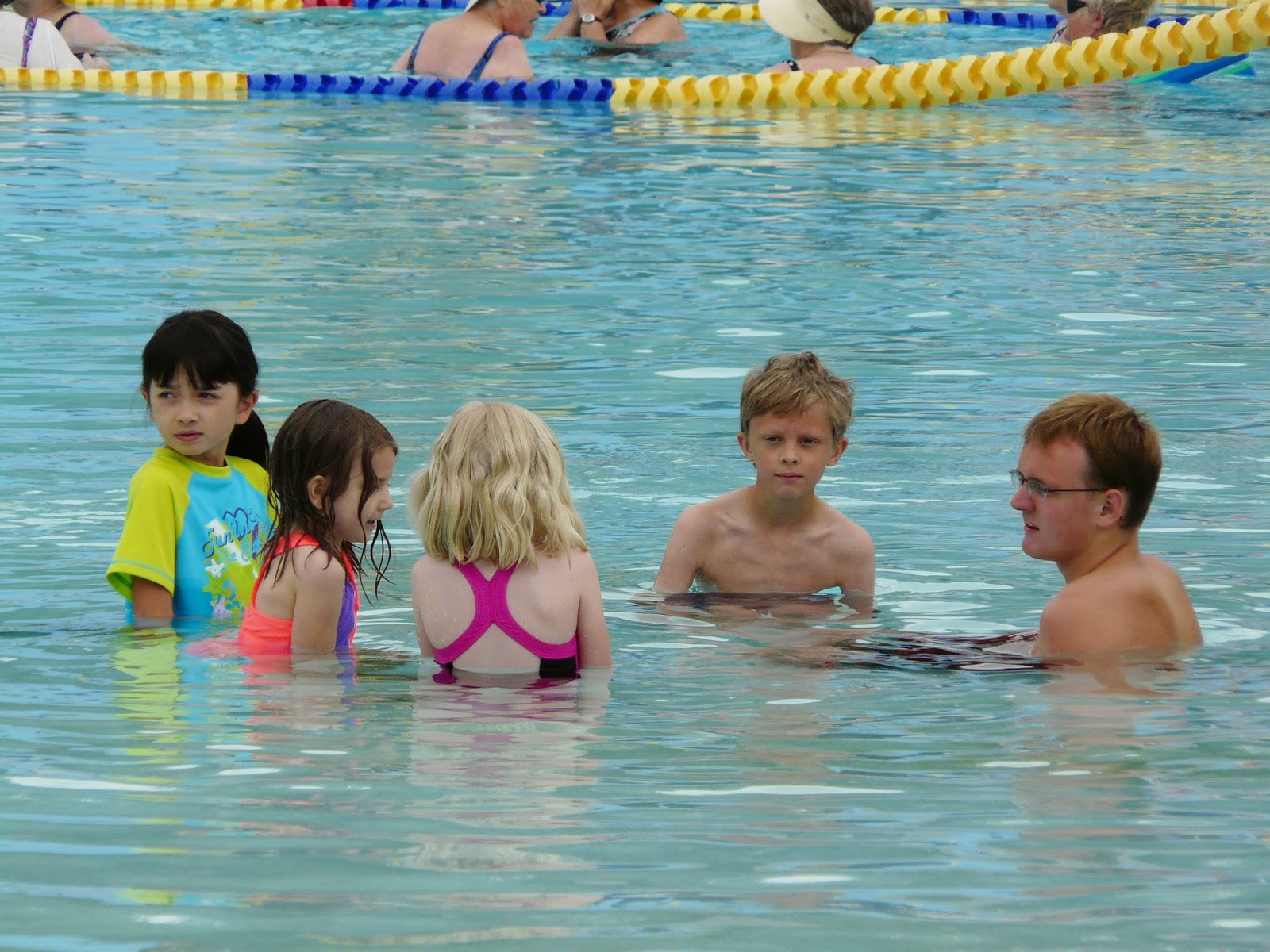 Yes, that's Kaleb (yes, I feed him!) and yes, he is taking his first swimming lesson!
He is so excited!  Riley and Zach are jealous.  They had swimming lessons when they were like two and three, but would like to take them again.  I'm not sure if they are too old though.  They'd have to start over.
After class, I asked him what he'd learned.
"I didn't learn anything.  We just played games."
"I saw you kicking."
"Yeah.  It was fun."
"You were learning how to kick your legs when you swim."
"Oh." 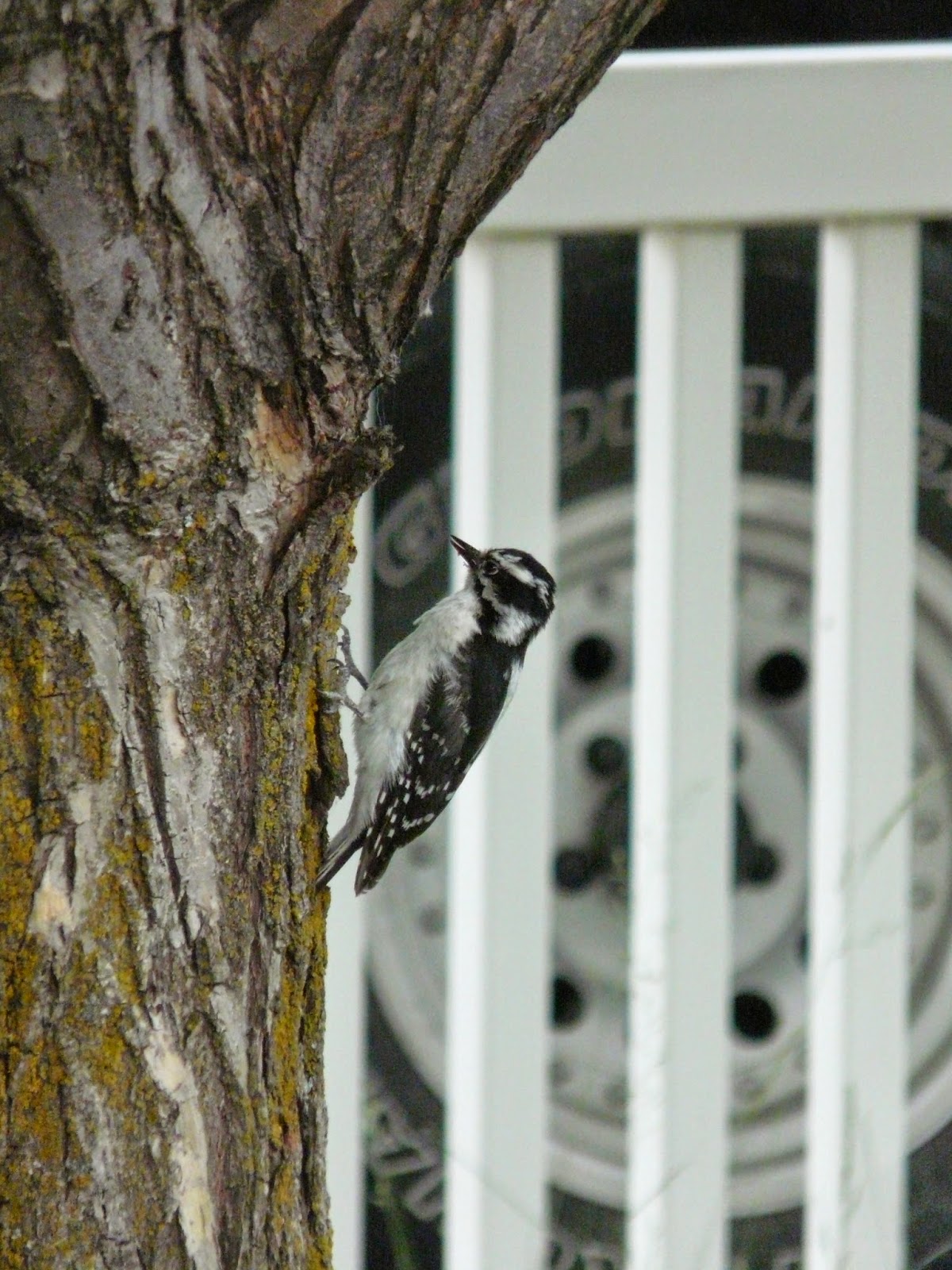 On our way out the drive way, there were a few of these birds in the tree in our front yard.  They were undeterred by the car, too.  Which I thought was odd.  But so cool! 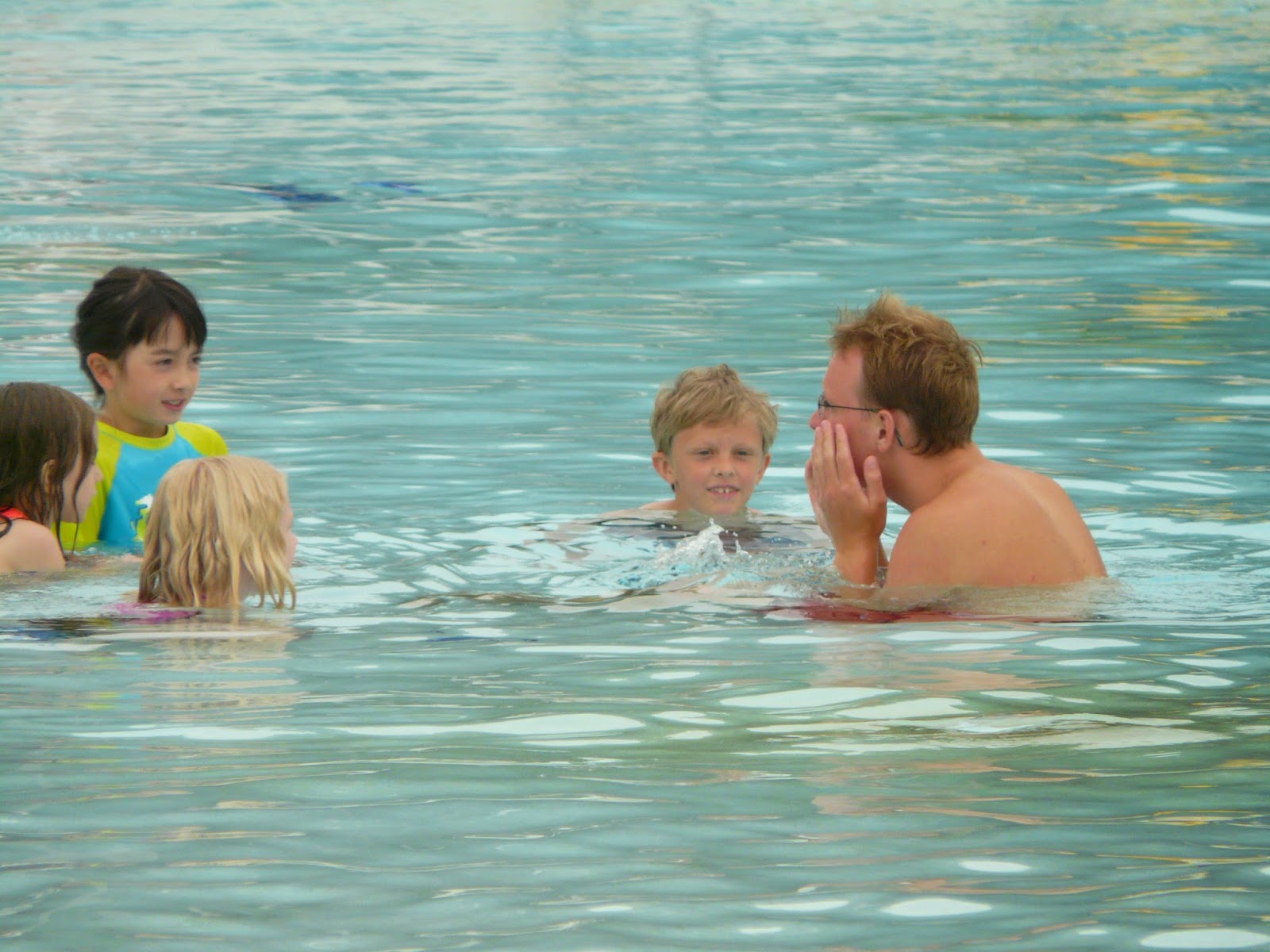 Here, his teacher is getting them to put their faces in the water.
And Kaleb actually did it! :D 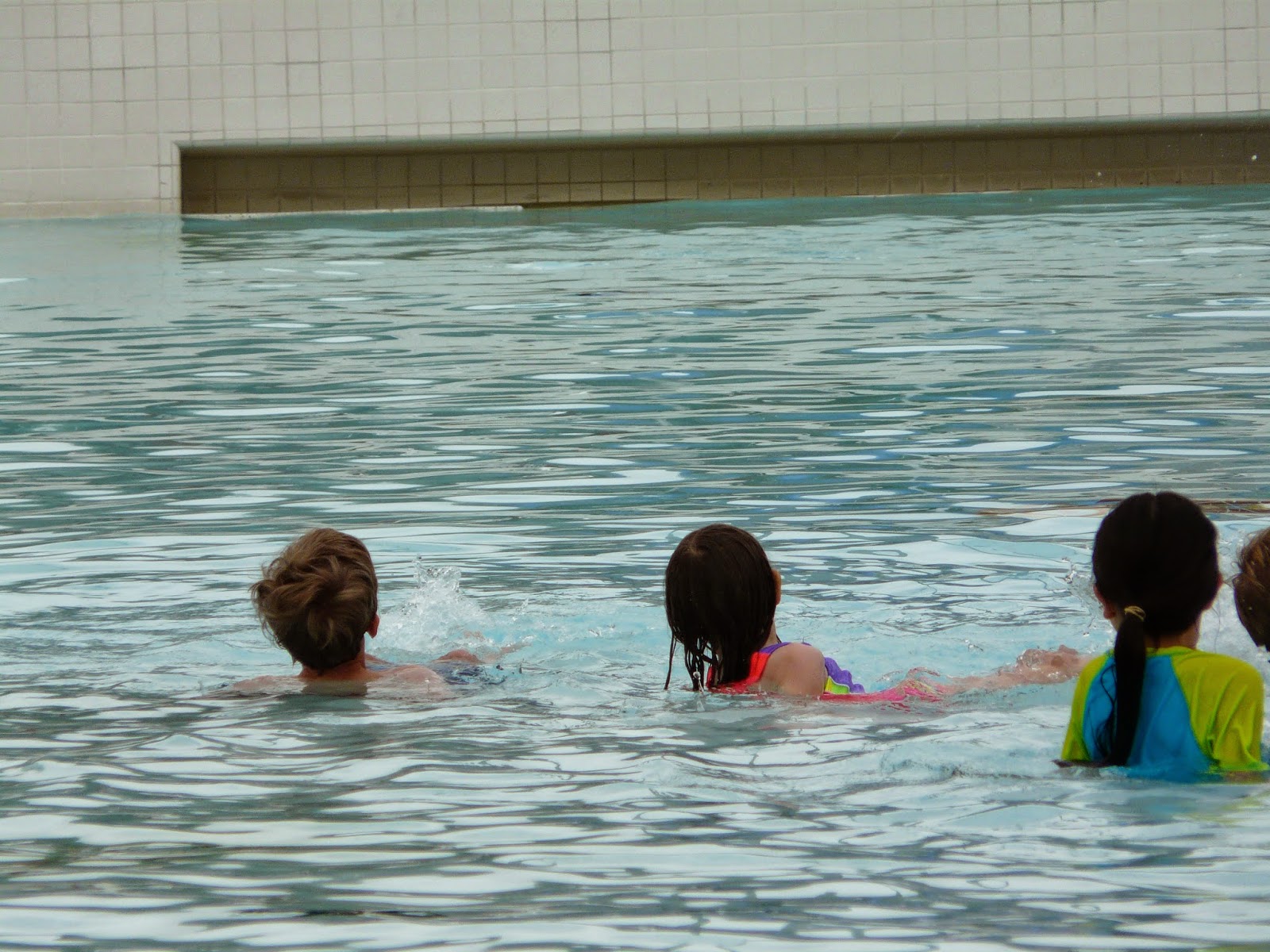 Here they are, kicking.  He'd get them to go fast and then slow. 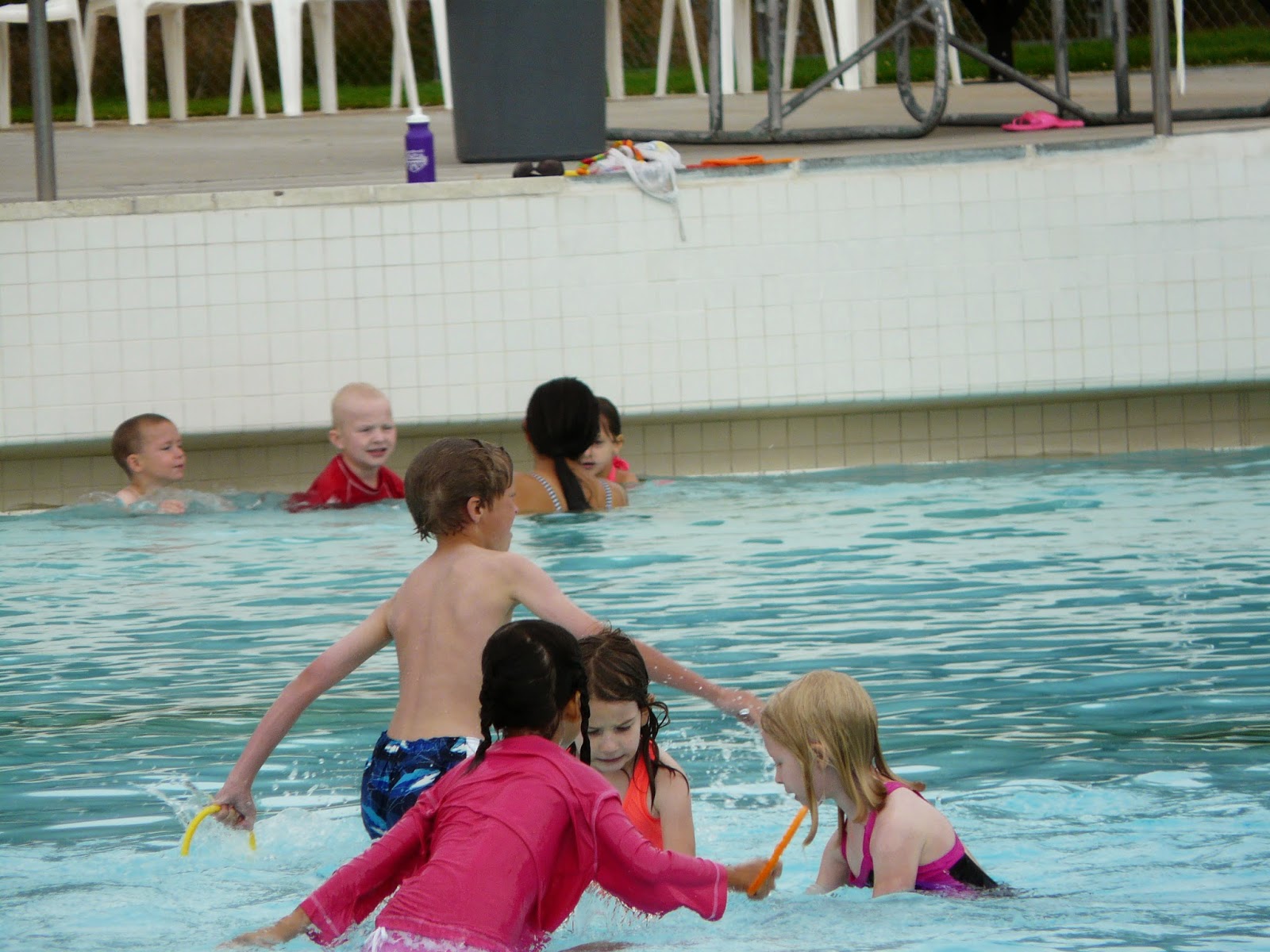 Then they played with the rings. 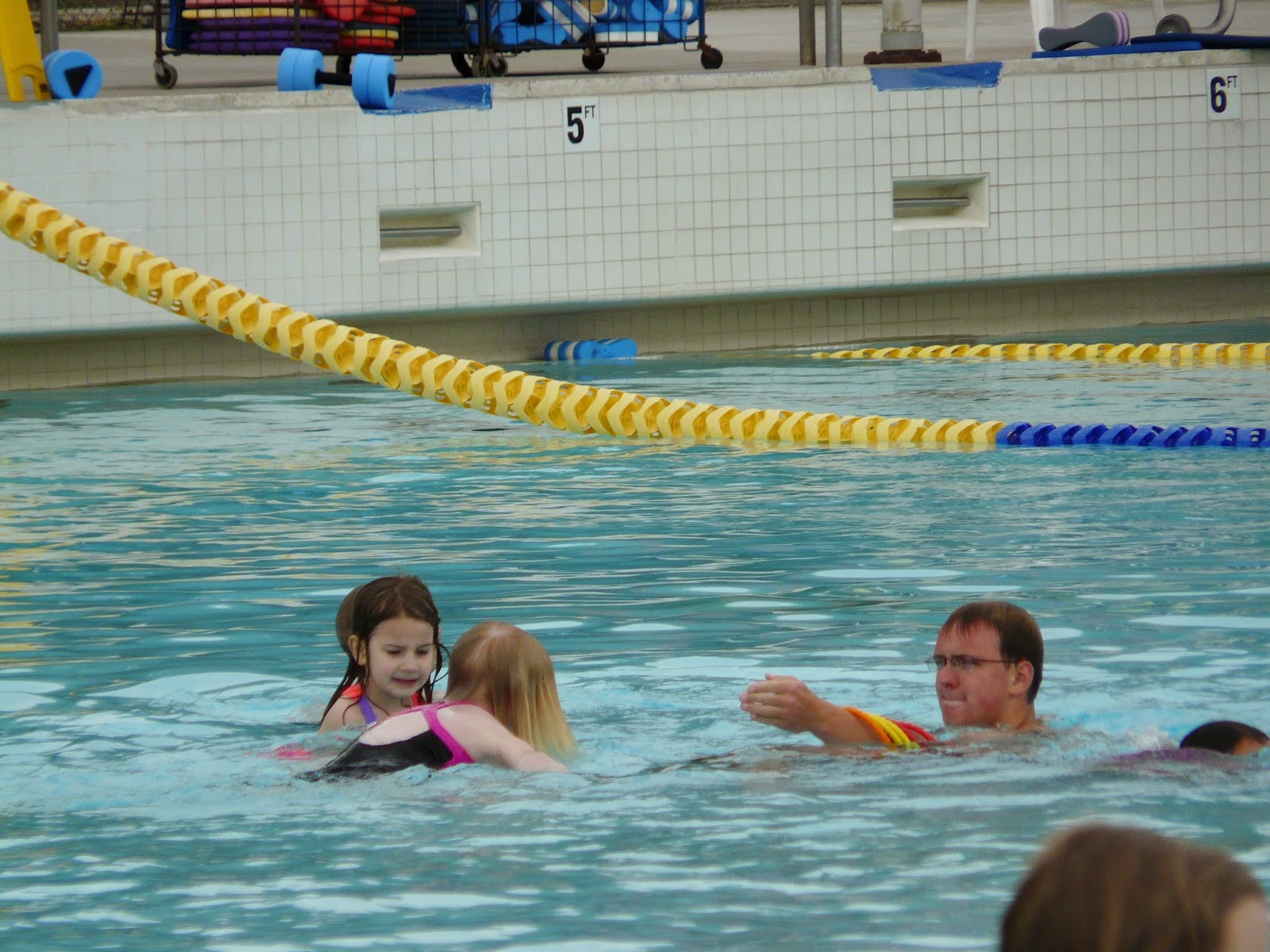 And put them on his arm. 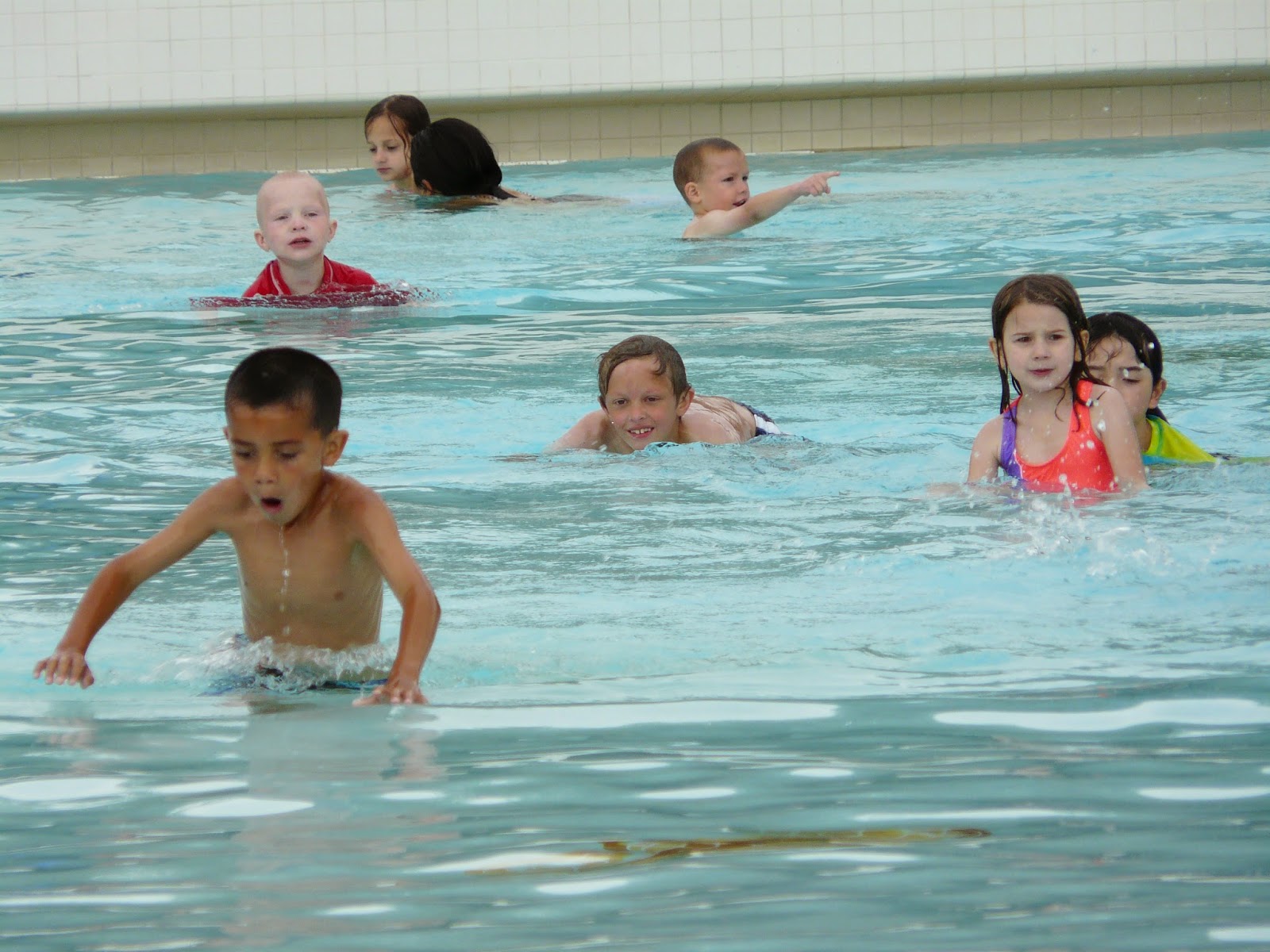 Then it was time to get out of the water!  It was not a warm day this morning.
"Did you have fun?"  I asked.  "Do you want to keep going?"
"Yes!  I want to take swimming lessons until I learn to swim."
We'll see if he passes Level 1.

Then we all went to the dentist.  No cavities.  Kurtis needs to floss better.  My gum line has receded drastically on one tooth (pray it doesn't get worse, or I will have to have a graft of some sort), Zach needs sealants, so does Riley, and Kaleb needs a frenectomy.  So we'll be back in a couple weeks to do that fun stuff.  But we always go to dinner afterwards so here's this from my Instagram: 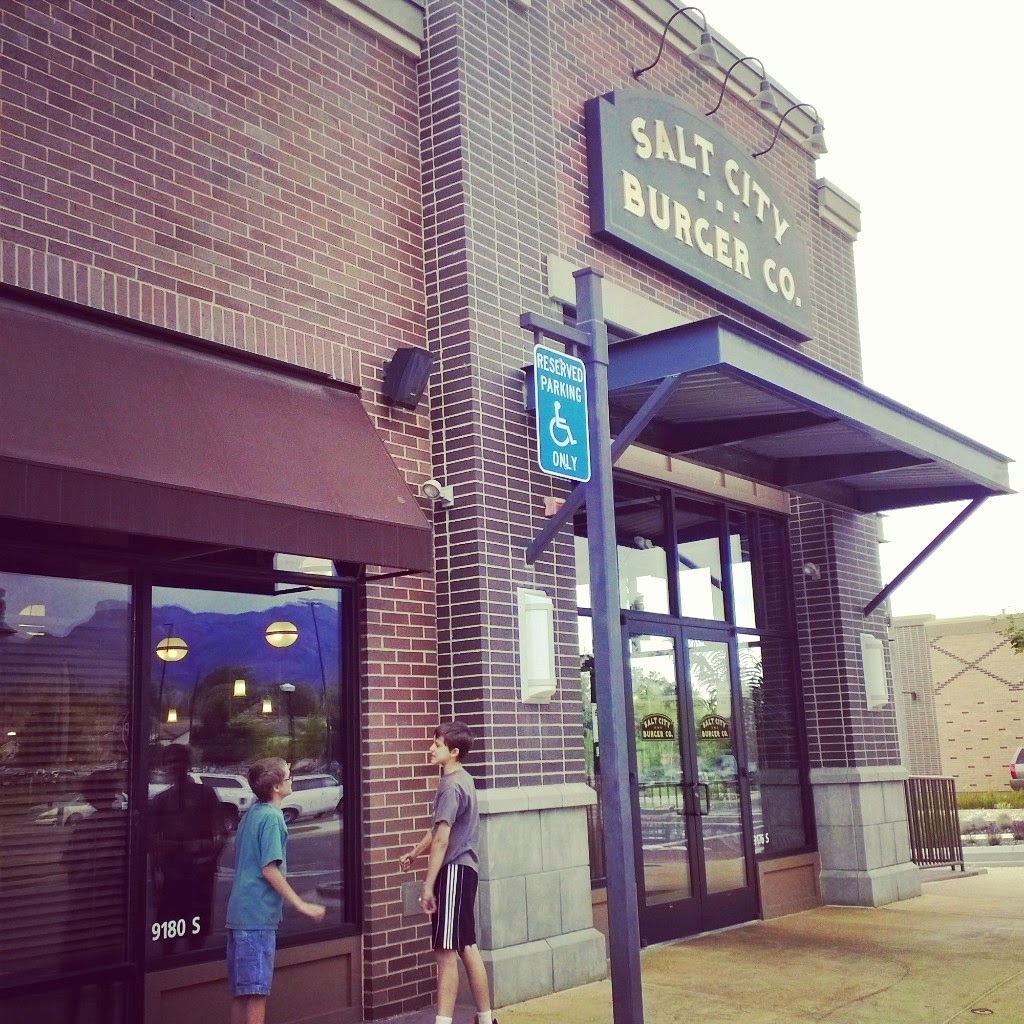 It was good.  And now I get to finish the laundry!


Posted by sweetlissybug at 9:31 PM No comments:

In Which We Visit The Lane

Once again it is time for my Sacrament Meeting Art series.  We don't have a special guest artist today, but that's okay.  I have something cute to share with you, too though.  We'll start with the art first, though. 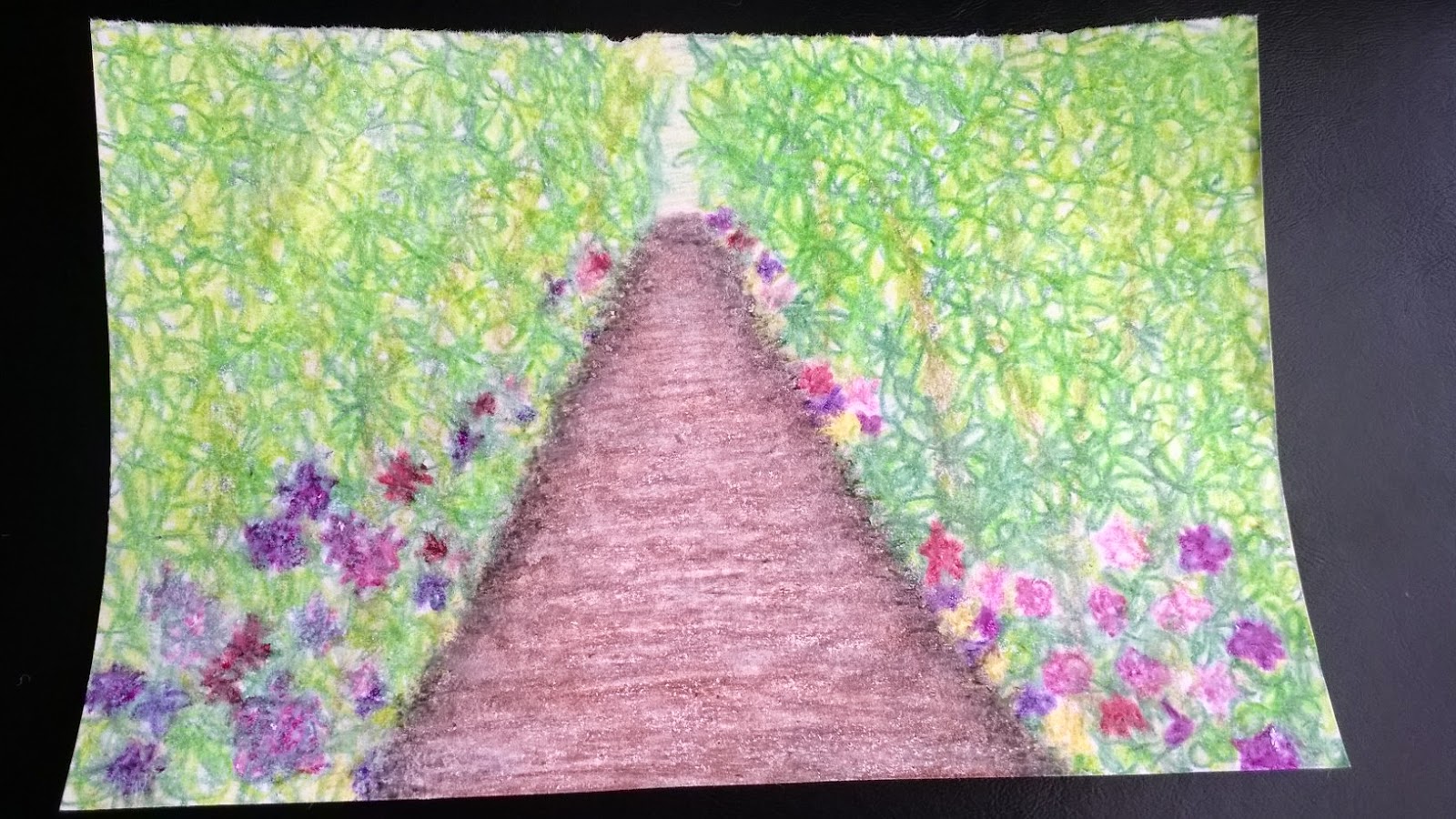 Sacrament Meeting Art #29:  June 15, 2014.
This one is pretty self-explanatory.  I will call it "The Lane".  I follow a few celebrities on Facebook and one of them posted a picture from his vacation in Martha's Vineyard.  I've never been there, but now I want to go to there.  His picture was just trees lining the lane and you could pretty much only see green leaves, but I wanted to add flowers.  Flowers make everything better. 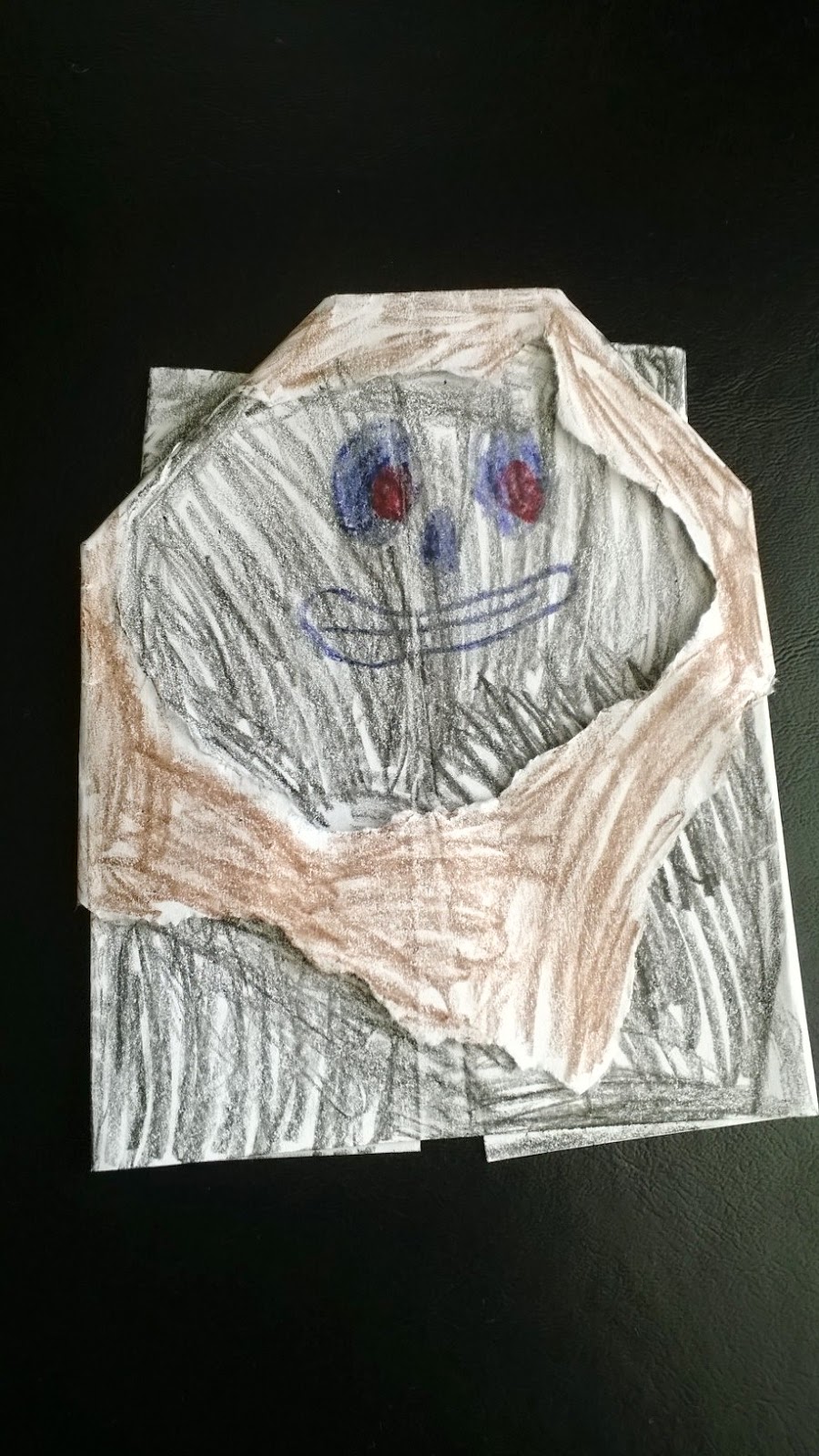 Then there's this.  Kaleb made this during Sacrament Meeting today for his dad.  It's an Ewok, and it's adorable.

HAPPY FATHER'S DAY!!!
Posted by sweetlissybug at 2:49 PM No comments:

In Which There Are Three 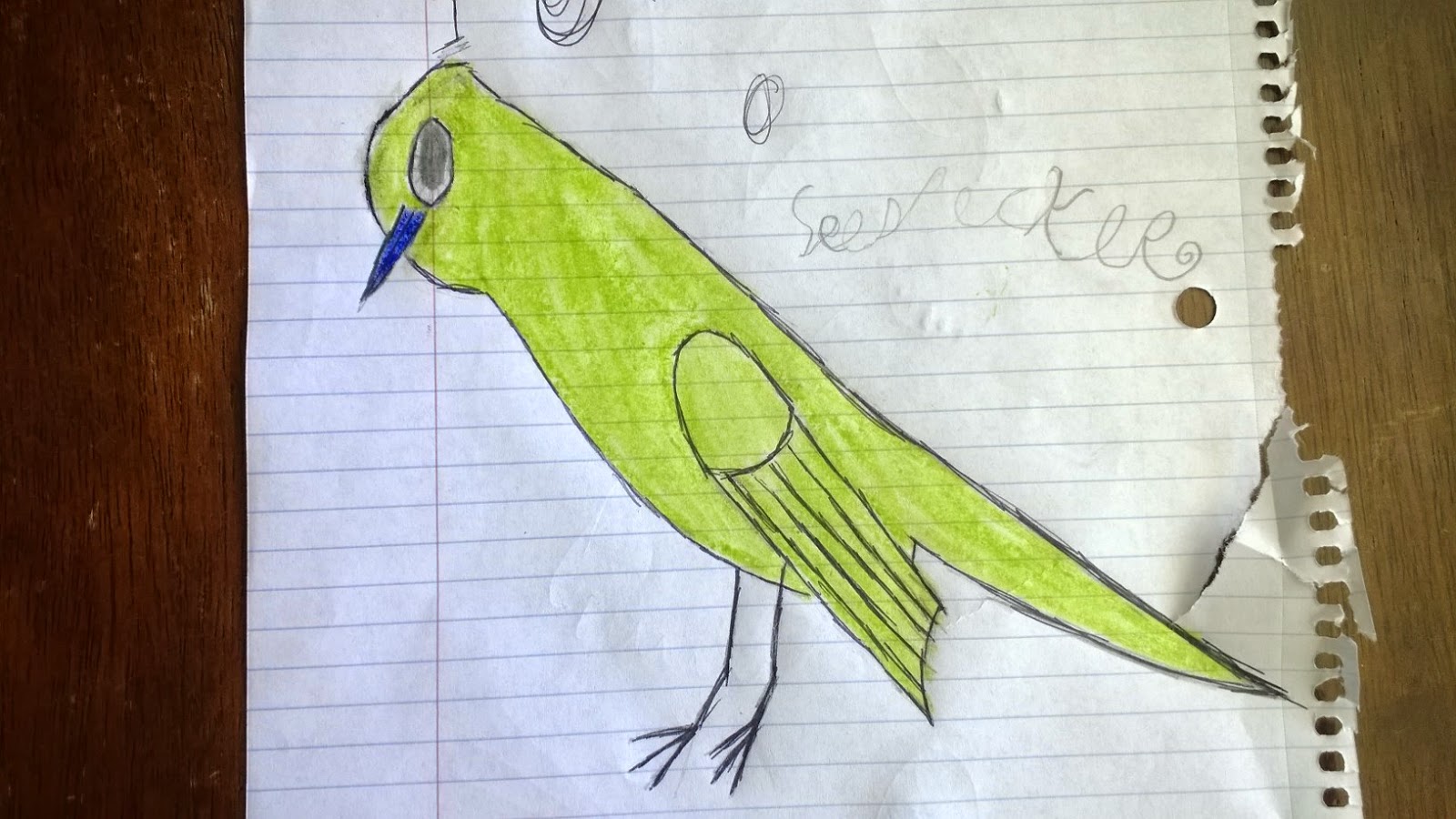 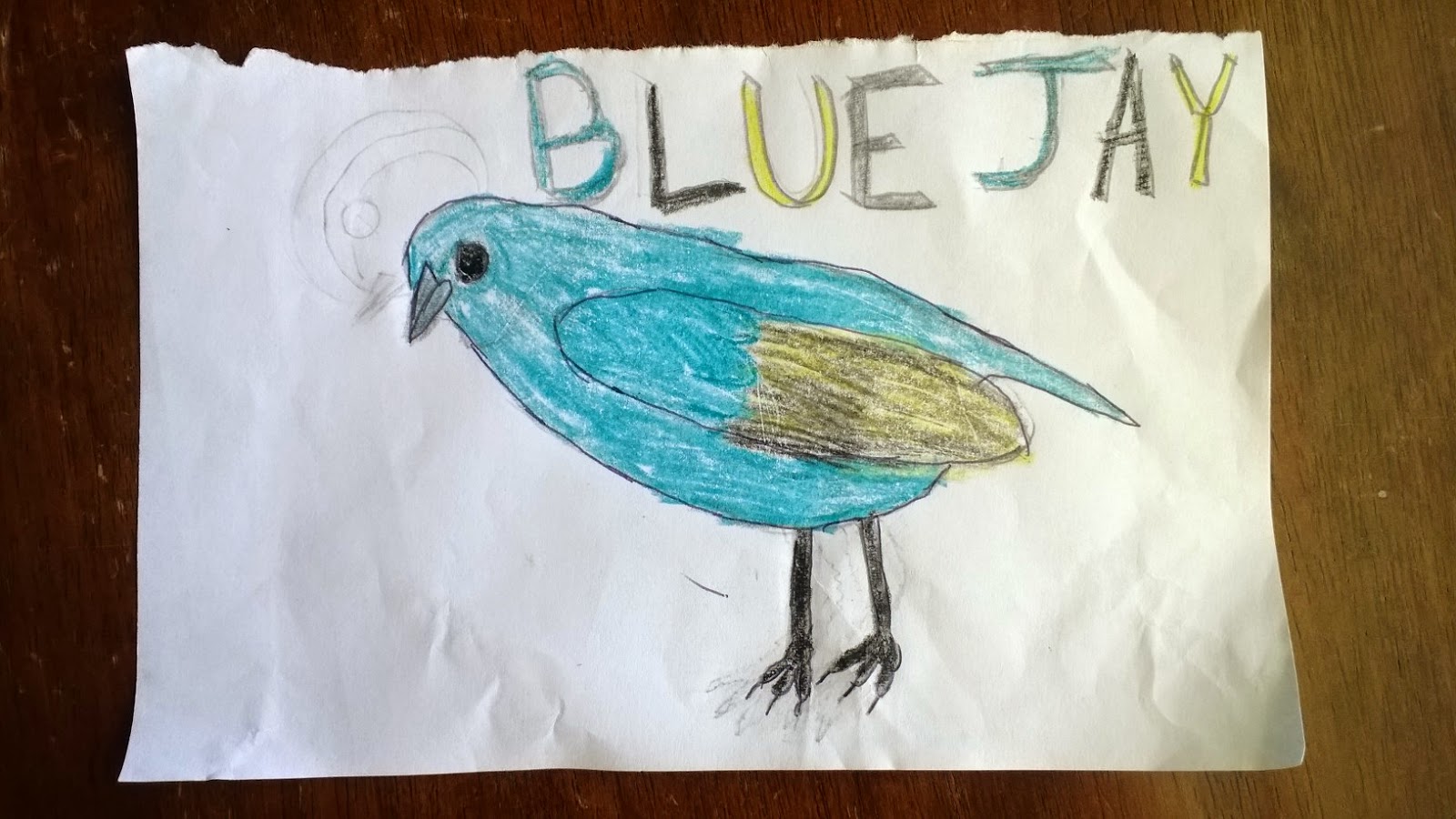 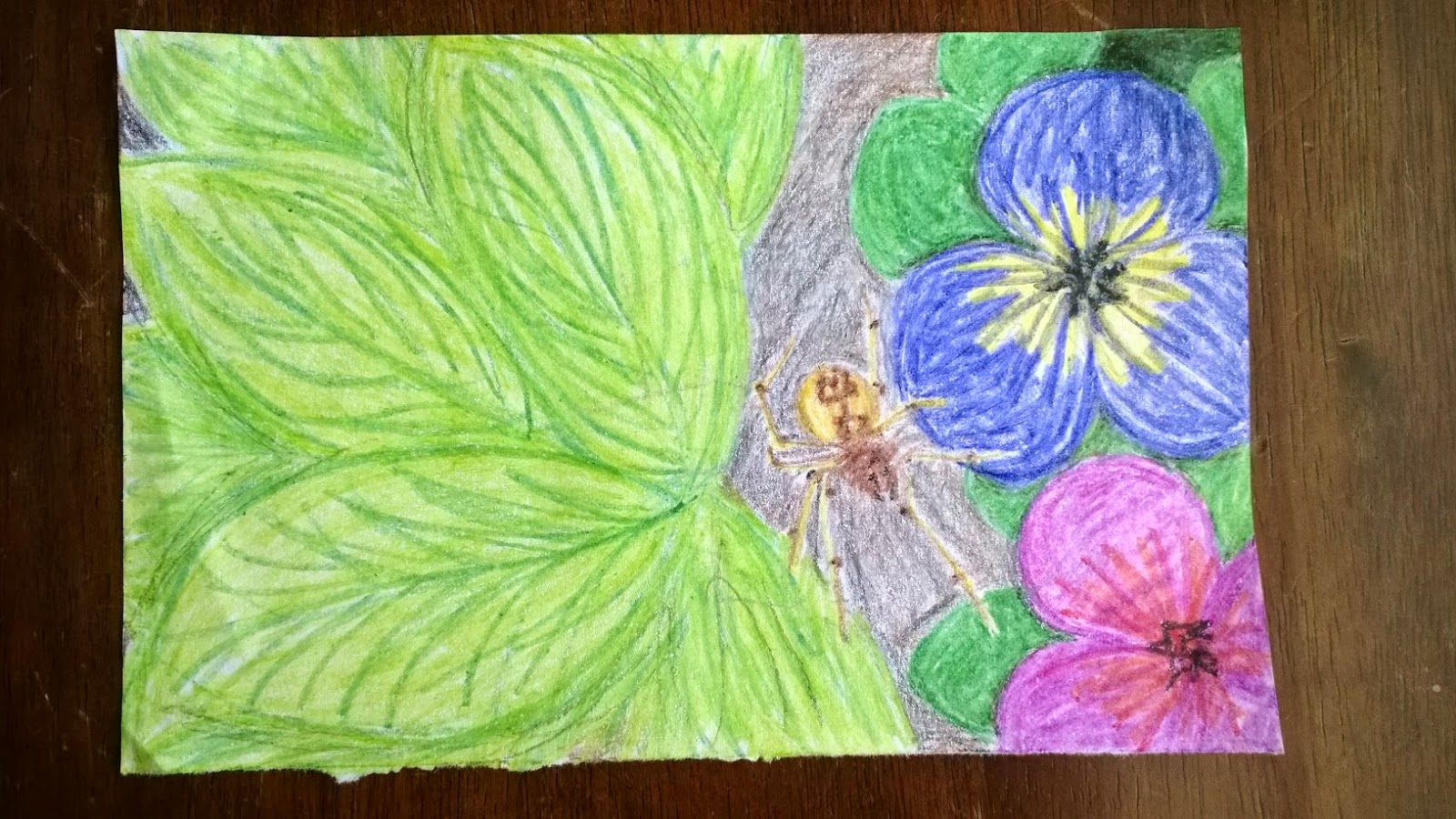 Sacrament Meeting Art #28:  June 8, 2014.
The other night, there was a spider in my bathroom.  I took a picture of it and when I zoomed in on it, it looked really beautiful to me.  Like amber.  So I posted it on facebook and everybody told me to squish it.  I did not squish it.  It's still there as far as I know (it's in the bathroom by the garage and I don't use that one as much).  Riley told me during Sacrament meeting today that when he was sweeping and mopping yesterday, he left it alone because spiders are good and eat mosquitoes.  I thought he would have squished it.
Well, anyway.  I decided to draw a picture of him in a flower garden.  I'm grateful for spiders.  I think they are cool.  Spiders eat the other bugs that gross me out.  Spiders are delicate compared to us giants. 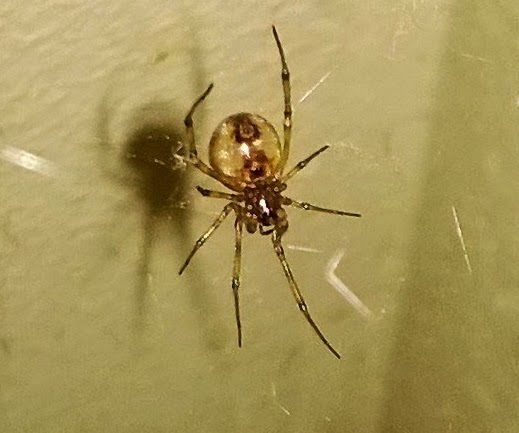 Isn't it pretty?
Posted by sweetlissybug at 3:05 PM 2 comments:

In Which I Leave Out the Ducks

Today, on the next edition of Sacrament Meeting Art, we have another special guest appearance by Riley. 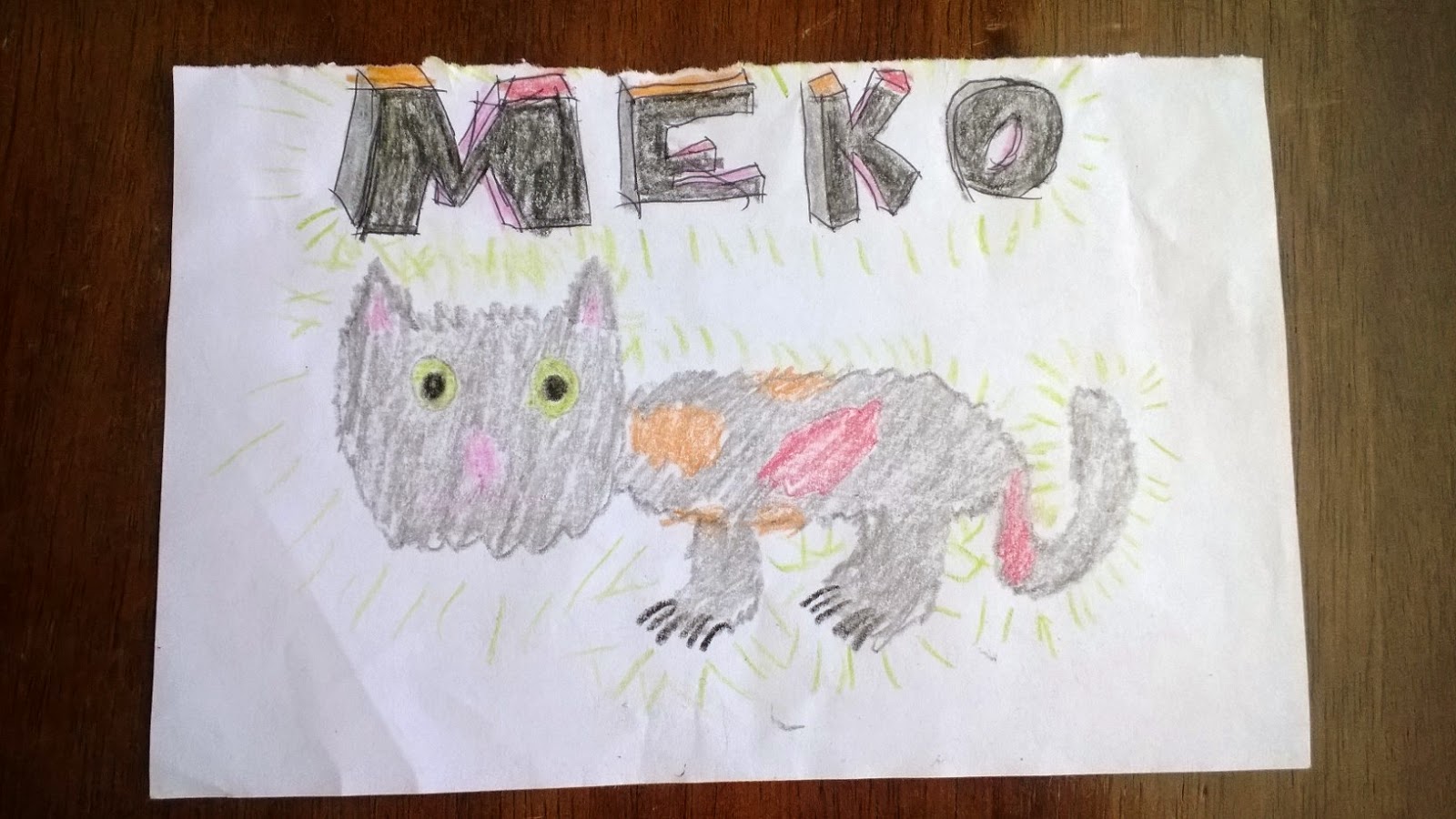 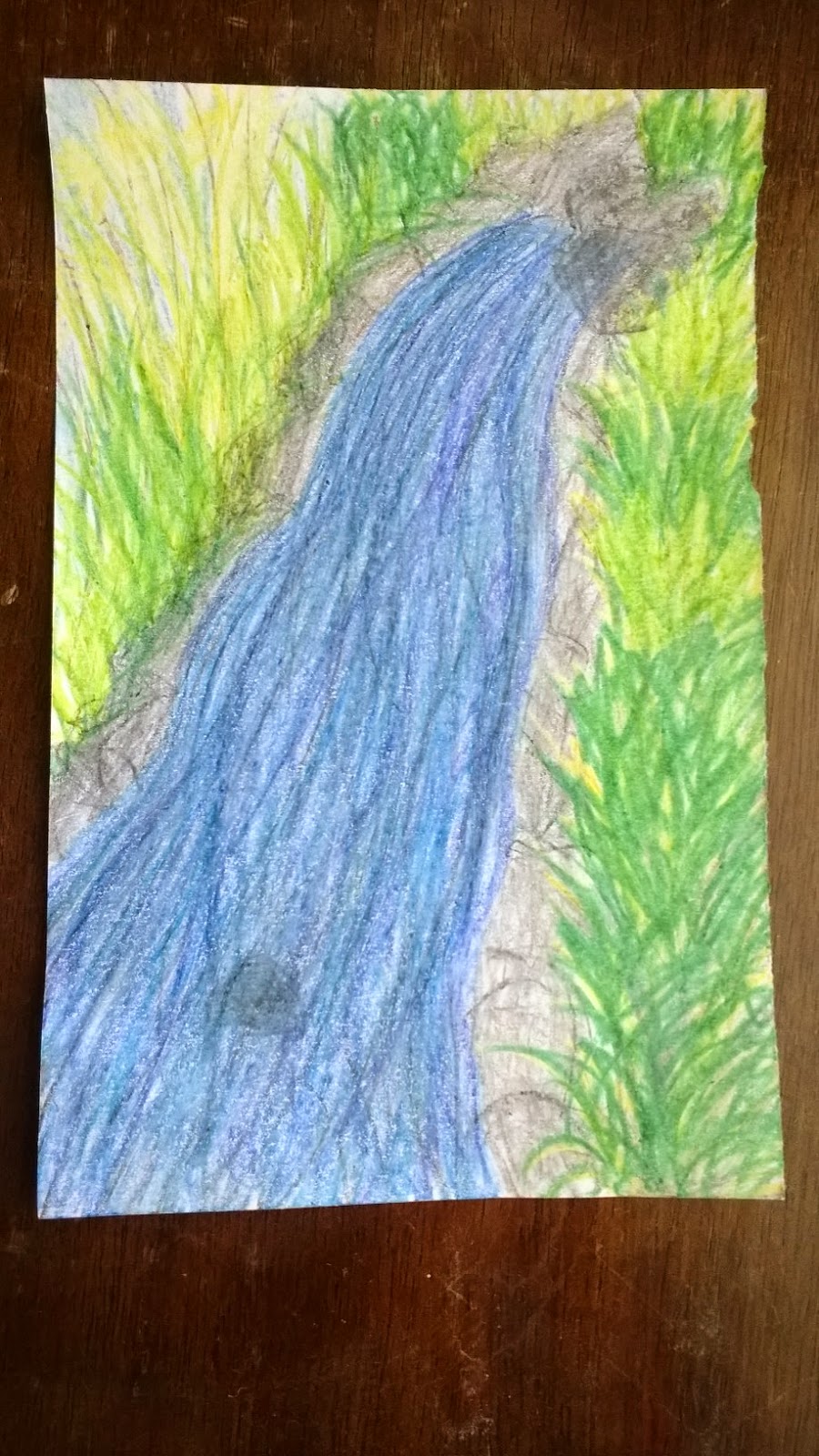 Sacrament Meeting Art #25:  June 1, 2014.
I love nature.  Heavenly Father truly did give us a beautiful world.  There's a lot of bad in it, but so much more good.  This picture is inspired by one of the pictures I took on Memorial Day.  I just didn't feel like drawing the ducks.  Or the parking lot.  Or the trees in the background.  Kaleb pointed out that I didn't put them in, so I'm giving you the explanation before you even asked the question.
Posted by sweetlissybug at 3:31 PM No comments: