In Which the Forthcoming Baby Boy Is Celebrated

I never blog any more.  What's wrong with me?  Well, today, I am sick with a cold.  It sucks.  I hate being sick.  I'm hacking up all sorts of stuff and it's great.  That better mean I am on the mend.
But last week, was my sister-in-law's baby shower!  It was so much fun!  I never get to see her very much any more.  She is due September 17th.  I am soooooo very, very excited!

Okay, so I started this post yesterday, realized the laptop upstairs has all my pictures of the shower on it and it was not plugged in or on, so I couldn't get to my pictures to show them to you.  So I quit.  But now, I've prepared better.  I plugged in the laptop and it's on, so I can get to my pictures on it from my computer in the basement and yippee!  I can share them with you now.  Also, while I am not 100% better yet, I do feel much better.  I came home from church (I only went to church at all because I had to give the lesson in Primary) and pretty much slept from 1 until 6 pm.  It was awesome.  Even if I did get woken up by one of the kids bugging me once or twice.  They still haven't learned that when dad is home, and mom is trying to rest, dad is perfectly capable of answering any and all of their questions.  Especially ones regarding what they are going to have for dinner.  I fear that day will never come.  Well, okay.  I don't really fear it.  More like I've accepted that it is a basic truth of my reality.  I just don't like it. Not one bit.  I often scream at them, "WHY CAN'T YOU JUST LET ME SLEEEEEEEEEEP!?" in my head.  Out loud it's not really that intense.

These are basically all of the pictures I took at the shower which is really not like me.  Usually I take more, but I needed a new battery for my camera (It came in the mail a few days ago, and it's like my camera is new again.  I'm so in love!), and I got distracted by talking to people.  You know, being social and all that. 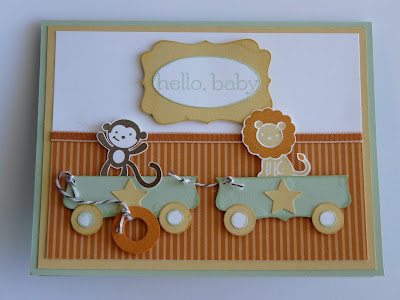 This is the card I made her.  I found the idea on Pinterest and it is sooooo stinking cuuuuuute! 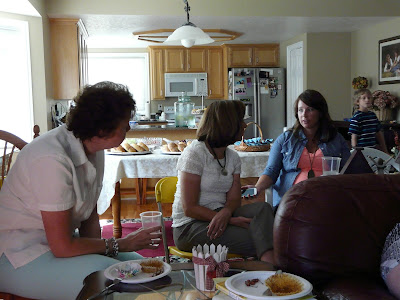 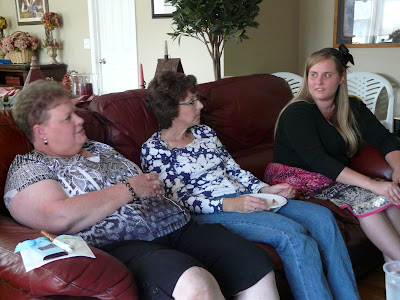 My mom's cousin's wife, my aunt, and my cousin. 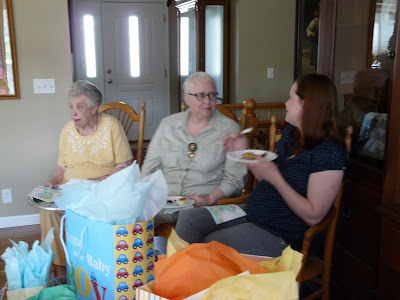 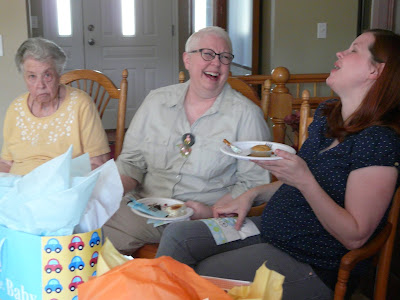 She's so fun to have around. 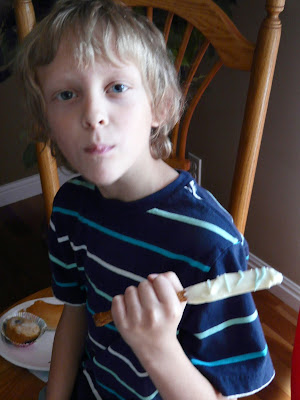 What!  What is a boy doing at a baby shower?  Those are for girls!
He he.  Kaleb said he wanted to come.  I said it probably wouldn't be that fun for him.  I think he disagrees. 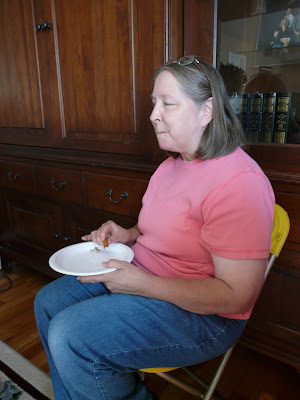 My mom.  Trying not to look at the camera. 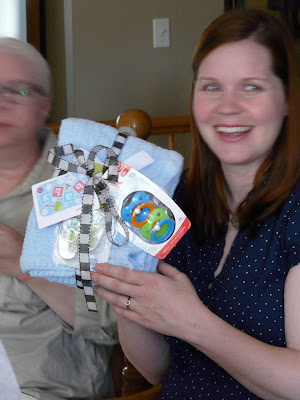 We played one game where we had to guess the cost of a bunch of baby items.  I lost horribly.  Then we ate.  Then there were presents! :) 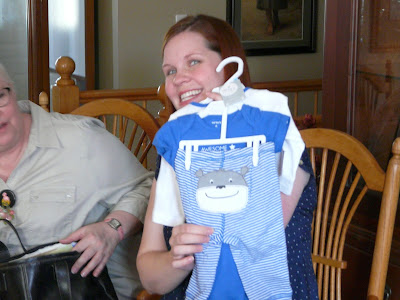 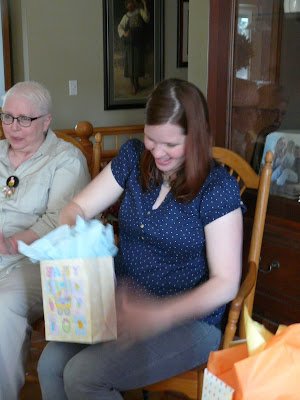 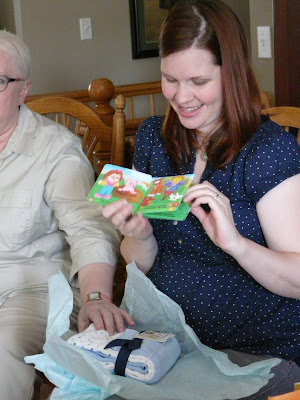 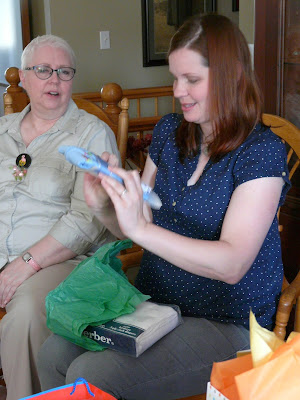 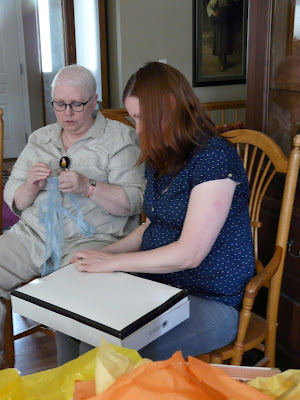 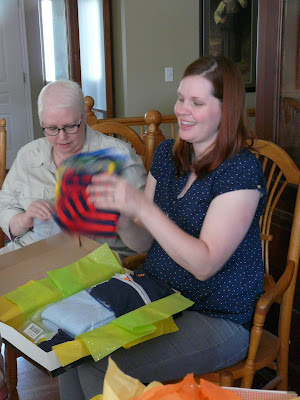 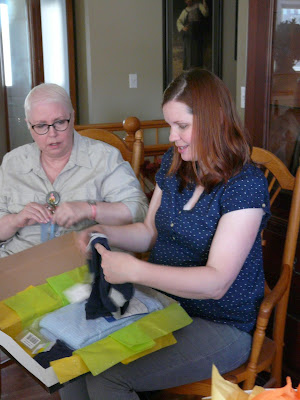 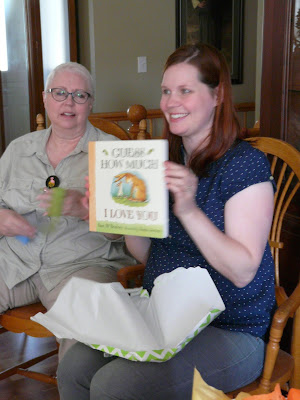 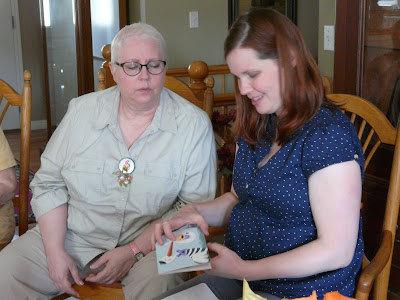 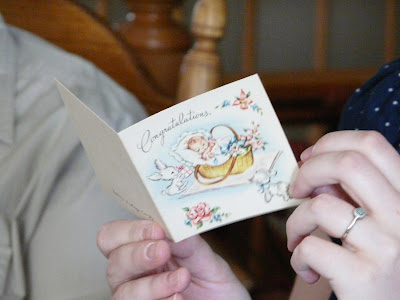 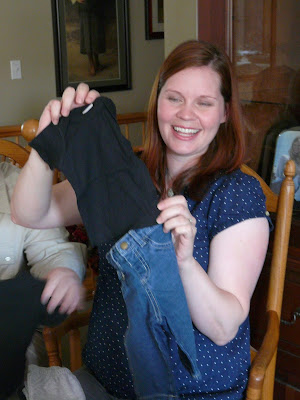 And also was able to find black t-shirts and jeans for the baby.  So he can look just like his dad. :)
"Do you know how hard it is to find those in all the sizes that I found them!?" She agonized. 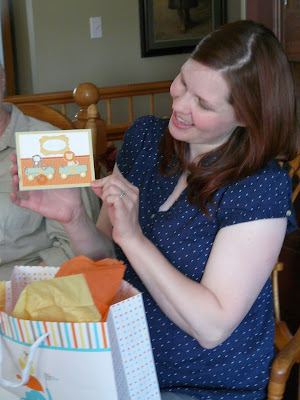 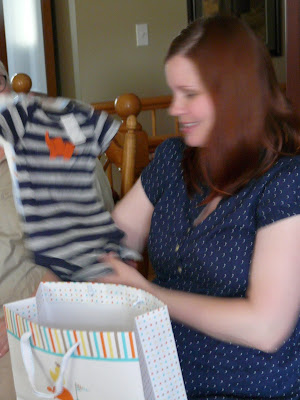 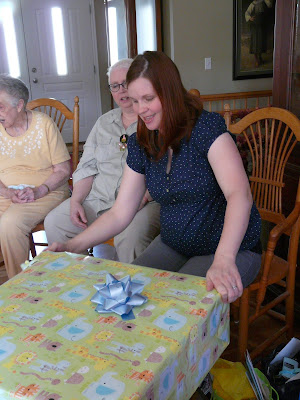 I gave her some adorable onesies and a cute pair of jean shorts.  Michele and I also went in on a gift.  I wrapped it and then started talking to her after she opened it.  I forgot to take a picture of her while she was opening it. 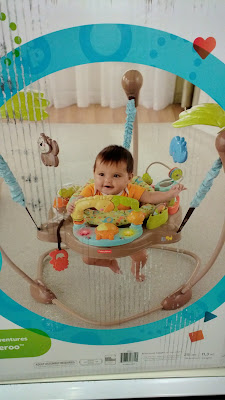 But this is what it was.  It's so cute!  I loved mine when I had a crawler.  I could put him in there and make dinner or take a quick shower.  It was the best thing ever!  I wish I could give one to all the new moms.

Well, That's A Dinner Topic I Could Live Without

It's not that I am embarrassed by this topic (although, I probably would be if we had company over).  I'm just really tired of explaining this process to them over and over.  It won't be the last, though.  I just really wasn't in the mood tonight.

Zach:  "You haven't taken us to Surf 'n Swim yet this summer!"
Me:  "You want to go to Surf 'n Swim?"  I knew they did.  I just haven't really been feeling like wearing a bathing suit this year.  I shouldn't feel this way, but I do.  I've gained ten pounds over the last couple of months.
Zach:  "Yes!  You asked us what we wanted to do this summer!"
Me:  "Well, I am not taking you when I am on my period." True story.  I hate going swimming whilst menstruating.  I pretty much hate anything whilst menstruating.  Unless it involves food.
Blank stare.
Riley:  "What's a period?"
I've had this conversation with them before.  Several times.  I'm kind of tired of it.  I usually use the word "menstruation" when I talk about it.  So I sigh and say, "I'm not taking you while I am menstruating."
Riley:  "What's that?"
I start to explain and Kurtis cuts me off:  "It's when your mom's body makes an egg, but because she didn't get pregnant, the egg doesn't implant itself and comes out and there is lots of blood."
I roll my eyes and start to correct him, but he likes to explain things and so he keeps going:  "The egg doesn't implant itself to the lining of her..."
Me: "Uterus."
Kurtis: "Her uterus, and so the lining comes out and it bleeds.
Me:  "Well, okay, but my body doesn't make an egg.  My eggs are stored in my ovaries and once a month an egg is released into my Fallopian tubes and if it isn't fertilized by your dad, and implanted into the lining of my uterus, it sloughs off."
Riley:  "We should have another baby."

That's what he got out of that conversation?  Not oh, gee Mom, I'm sorry.  That sounds really unpleasant and I'm sorry you have to go through that so often.  Maybe that was just his solution to the problem.  Oh, well, as long as you are pregnant, Mom, that won't happen and you can take us swimming all the time!
Face-palm.  Kids just don't get it.  At all.
Posted by sweetlissybug at 9:58 PM No comments: