I am in a choir. We sing beautiful songs written by our director. There are many of us who come from different places in our lives. Yesterday, I posted on my facebook page that I wished Kaleb would get dressed, and thought nothing more of it. Most people don't leave me comments. One of my friends from the choir posted, "Maybe his mom should help?" I love this guy dearly. He's a great person. But clearly, he has no children of his own and has not taken a child development class recently. There were many thoughts that ran through my head. For instance, "He's almost five freaking years old! If he can't dress himself by now, I have failed him as a mother!" Or "Yeah, I could go in there and rip all his clothes of him for him, but what would that feel like? I wouldn't want any one ripping my clothes off me." Well...Yeah, okay, you know what I mean. Any way. Another response could have been, "He's not a baby any more. He's a big boy. He can do it himself." My personal favorite was, "Gee, I hope you are planning on taking a child development class before you and your cute wife have kids!" As sarcastic as I am, I did not say any of those things to him. He obviously has no kids of his own and just needed a little pat on the head. I replied with, "That would be counter productive." Thank you. Thank you. Bow. Curtsy. Yes, I can be civil once in awhile. :)
Posted by sweetlissybug at 2:14 PM 2 comments: 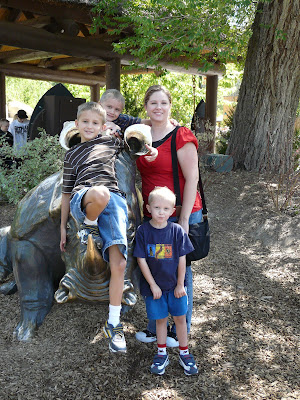 My kids start school on Monday. Hallelujah! So I decided we needed to do something fun before they go back. We went to the zoo with Nicole and her girls. Apparently her son was too good for the zoo. He was missed, but that's what happens when kids reach a certain age (preteens). We got to see the baby snow leopard. It was so cute. Our zoo is having a Madagascar exhibit where the main attraction is the fossa (pronounced foosah). He was asleep when I saw him, but apparently they are very curious creatures and are only found on Madagascar. Pretty cool. I really liked the hissing cockroaches. They were huge! I probably only liked them because they were in a cage, though. I wouldn't want them walking around in my house or anything. There was also a baby elephant, but we could only see him on a tv screen. The weren't ready to let the nine-day-old baby out for the public's viewing. I don't blame them.
Thursday, Kurtis took the day off (and Friday). We went to lunch at our neighbor's house. She was having a cafe. Our payment was a can of food. What a great idea. Then we went to Grandma's house. My mom has been telling my boys they could sleep over at her house all summer. That night they finally got to do it. They were so excited! Kurtis and I were even more excited! We went to the Heritage Theater's end of season banquet. It was so fun to see everyone again. After that, Kurtis and I went to see District 9 (the movie). It was interesting. I liked the way it was filmed. The documentary style of it was well done. I liked the story. But I didn't like watching people's guts fly all over the place. It was kind of gross. And the cruelty of one of the villains was disturbing, but I suppose that's kind of the point. It was a good movie, though.
Friday, Kurtis and I slept in. So nice. Then I balanced the checkbook. Something that took a lot longer than I thought it would. Then I made brownies, registered the dog, took library books back (errands I just didn't want to do with kids in tow), and then off to my mom's. We played Clue and Zach passed off some of his cub scouts stuff with Grandpa. Then we went to my parents' ward party for dinner, and games. Uncle Jeremy tried to win the pie eating contest, but was out bested by someone who moved into the ward after we left. Kaleb wanted to do all the games and drug me around. He went bobbing for apples. He loved the cherry seed spitting contest. Kurtis and I held our own private contest. He won by like an inch. Dang it. Then we went to the dunk tank. Kaleb almost dunked someone. But he didn't throw it hard enough. Then we watched as Uncle Jeremy got dunked. So much fun to see your little brother get all wet! Then Kaleb wanted to do the toilet seat throwing (did I mention the theme of the party was "Hillbilly Hoedown"?). He thought that was the greatest. He made it into the hula hoop a few times too. I was impressed with his athletic abilities. I think they had a pretty good summer. At least at the end. :) 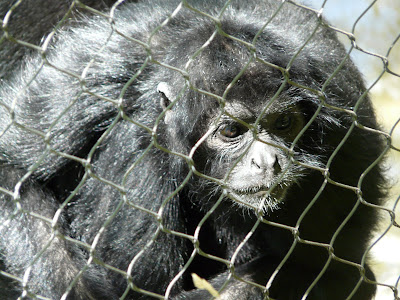 This guy was so close to the cage, I couldn't resist getting such a good shot! 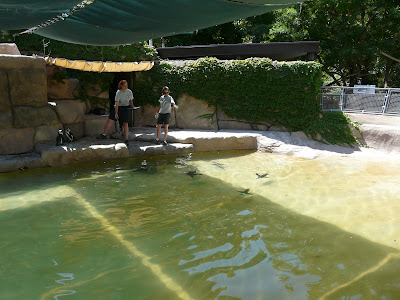 Zachary loved watching the penguins swim. He said they looked like they were flying in the water. I have to agree. 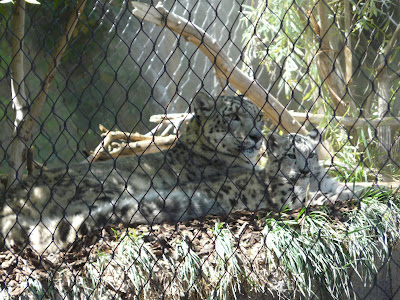 Here is the mommy snow leopard and her little cub. Apparently the dad has nothing to do with them now. Typical. 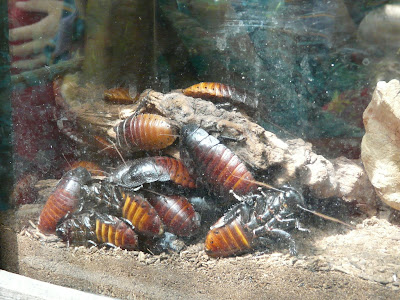 These are the hissing cockroaches. So cool! 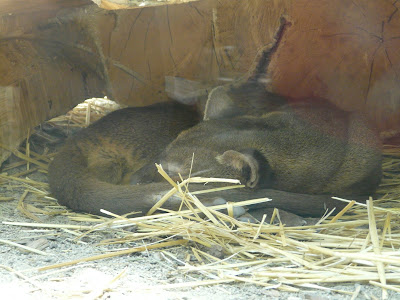 Here's the sleepy fossa! I wish we could have seen him in action, but naps are so important, I wouldn't want to deprive him of that. 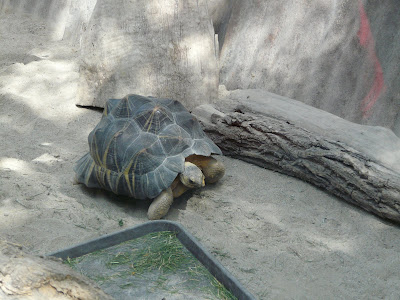 These radiated tortoises are endangered. I liked them a lot.
Posted by sweetlissybug at 11:08 AM 2 comments:

Remember how I said I was bored? Yeah, well. Sometimes, you just should be happy with what you're given.
Yesterday, like an hour after that post, my boys' friends came over to play. Zach and Riley have a rule. They can't play the computer unless they have played outside for an hour for every half hour they want to play on the computer/playstation/wii/xbox. So when their friends had came over, they still had to play outside. I don't know whose idea it was, but Zach came to me and said, "We want to go around the block picking up trash." How very good citizen of them. So I said they could do that and that it was a good thing to do. Then they said they wanted to go on the trail that cuts through between some of the houses in the neighborhood making it easier to get to the next block (on foot). I should have said no. I wanted to say no, but they were doing a good thing and I couldn't think of a good reason why they shouldn't, so I said they could go to the end of the trail and turn around and come back. He got excited and left happy. I like it when they are happy.
Monday is my laundry day, so I was upstairs folding clothes in my room when I hear screaming. It's not very loud at first, so I don't really understand what's going on. Then, my mind starts going into hyper drive. Who is trying to steal my children?! Is it my children, are they in danger? Before I could even get downstairs, they were back, in the house screaming at the top of their lungs. I swear it sounded like Hell had opened its gates and tried to swallow them whole. They wouldn't stop either. Then Zach's friend said, "They got stung by wasps!"
Oh, is that all? Seriously.
But things were worse than just one little sting. Zach got two in his leg and was crying that it felt like one had stung him twice in the same spot. We put ice on it and sat him down on the couch after I screamed at them to stop crying. Because seriously, they were loud. So very loud. They were freaking out. Riley got stung on his arm, his eye (by his eyebrow), and the side of his head. Zach's stings did nothing but look red for awhile, but Riley's swelled up. I gave him ice and Benadryl. His eye swelled shut, too. I took a picture after it wasn't looking as bad.
I asked them if they had disturbed a nest or something. They said Zach picked up a can, and there were wasps under it and they attacked them. That story sounds weird to me. I asked if the wasps came out of the can, but they insisted they were under the can. Who knows. All I know is that it is going to be even harder for me to get them to go outside again. Zach got stung by a wasp in July, and it's been like pulling teeth trying to get him to go outside again.
I let them play Guitar Hero World Tour after that. 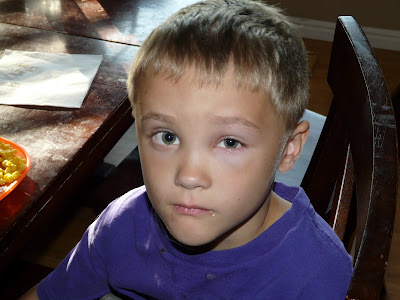 Posted by sweetlissybug at 9:07 AM No comments:

School starts in two weeks! Fourteen days (yes, I am counting)! I am not doing the happy dance, yet, though. We'll save that for when they are gone. He he. We're ready. We have their new backpacks. Riley got a brand new lunch box that matches his backpack *cough* lame - like this post *cough*. I bought a bunch of crayons, markers and colored pencils for their school projects. So now, we are practicing getting ready for school in order to leave on time. So far, each mission has resulted in failure. The punks. They will be walking. I will not be walking with them. They are big boys and don't need their mom to walk them to school. It's so nice. Then, it will be just me and Kaleb. I am going to love shopping with only one kid. It's the best. Well, no. The best would be if I had zero kids with me while I was shopping! Especially since Riley hates shopping and will be the most obnoxious kid in the store just so we will leave. Yeah. It sucks, and we've caught on. We have our ways of making him behave. He he he! We are bored and just can't wait. I am any way.
Posted by sweetlissybug at 2:31 PM 1 comment:

Yesterday, I took Neji to the Big Fix in SLC. When I went to pick him up, he wanted absolutely nothing to do with the vet tech. She wanted to put a cone on him. He kept trying to get away from her. She asked me if Neji is always this skittish. He doesn't like the vet at all, but all I could think was, "How do you expect him to feel about you right now!?" I mean, seriously. 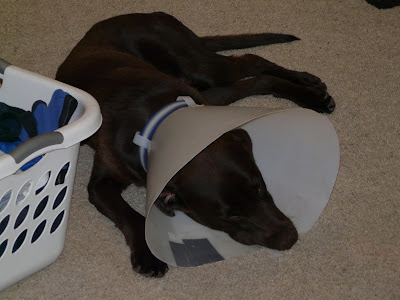 Posted by sweetlissybug at 10:15 AM No comments: