I Still Think My Neighborhood Is a Safe Place To Live

So last night, when I got into town after being at the play all day (there was a matinee and an evening performance, and even though I do not play Mabel any more, I still help out backstage), I drove up the street I usually do, stopped at the stop sign, looked around, and noticed cameras, and flashing red and blue lights.  What the heck is going on, I wondered.  Why are all these cars every where?  Nobody was directing traffic, or saying that I couldn't continue on my way home, so I continued, and turned up my street.  Cop car at the end of the street, cop car by the grassy area across the street from my house, and one at the head of the trail we take as a short cut to get to church or the grocery store.  I opened my garage, and sat in my car in the drive way for a second contemplating what could have possibly happened to require so much police force.  Drugs?  Yeah, probably drugs.  I pulled into the garage, and went inside.  "Kurtis?"  "Yeah?"  I hear from the basement.  "Why are there three cop cars up our street?"  "I don't know."  He spends too much time in the basement.
I got on facebook because my neighbors would know, and have posted about it by now.  An old high school friend had posted an article stating that a man had been shot in the hotel around the corner from where I live.  Oh.  Well, that explains everything.  I couple of my friends posted that there was a helicopter and swat teams going through the neighborhood searching for the shooter.  I asked Kurtis if he had heard a helicopter or anything, and he said, "No.  I didn't hear anything."  How can the whole entire world be moving around you and you don't even notice?!  Well, I guess I know who is going to survive a zombie apocalypse.  A few of my friends had their home searched by swat teams.  One of them came home to a broken door, and were told they could not go inside until the swat teams had cleared it.
I made Kurtis go through the house and check to make sure the doors were locked, and to check on our kids.  I was just so angry that this would happen in my neighborhood.  You are not allowed to shoot people in my neighborhood!  So I really didn't sleep well last night.  I skipped choir this morning, and church.  Today is a stay in my pajamas day, and I have zero apologies for indulging myself today.  This is a link to the article on ksl.com about the story.  I'm grateful the police found and caught the perpetrator.  A part of me feels sorry for him.  A part of me doesn't.  He made his bed when he decided to do meth.  Now he has to go through the terrible withdrawal and awful jail time.  It's tragic.  The whole story is just tragic.
But things like this happening are rare.  People are up in arms, and want to burn that hotel to the ground.  According to the sex offender registry, there are pedophiles living there on a regular basis.  As far as I can tell, it has become a half-way house of sorts for people like that.  It's frightening.  But I can't live my life in fear, and keep my children locked up inside all day.  I refuse.  Bad things happen everywhere - even here.  But most of the time, things are pretty quiet, and the neighbors can be pretty nosy, so I think we'll be okay.
Posted by sweetlissybug at 2:33 PM 4 comments:

Yes. The Police Really Should Interfere ;)

As I have mentioned before, I am in a play.  It is a very wonderful play called An Ideal Husband by Oscar Wilde.  I play Mabel Chiltern.  I am really just an alternate.  I only have two shows this Friday and Saturday, March 11th and 12th (shameless plug - I know!) at the Draper Historic Theater.  The show starts at 7:00 p.m. (Sharp!), and you can go here and click on the link "Buy Your Tix", and pick your seat, and print your $9.00 tickets.  I am excited to have the opportunity to be a part of this show.  We've really come together as a cast, and are having so much fun.
But that isn't why I am blogging today.  I have a line in this play where I am explaining to my sister-in-law about one of my brother's secretaries who just won't stop proposing to me.  Here is the line, "Then, he proposed to me again in broad daylight this morning in front of that dreadful statue of Achilles.  Really, the things that go on in front of that work of art are appalling!  The police should interfere."  The year is 1895 in in this play.  Seriously, how bad could that statue be?  I have been meaning to look it up, and see it for myself so I would know what I was talking about.  Finally, I googled it today. 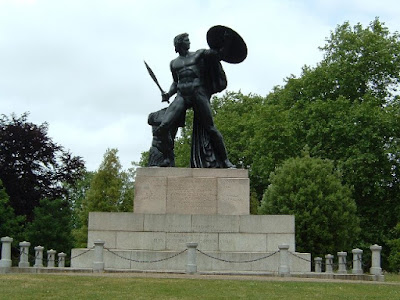 I don't blame her for finding this statue dreadful.  At least, this is probably the statue she is referring to.  The play takes place in London, and this is a picture of the statue of Achilles in Hyde Park that was erected in honor of the Duke of Wellington in 1822.  All I can say is yikes.  I never really did understand why the sculptor couldn't at least put on some sort of loin cloth or something.  That would probably have a lot less detail to sculpt.  And honestly, who would want to be proposed to in front of that monstrosity?
Posted by sweetlissybug at 2:15 PM 4 comments:

I Was Running Around All Day, and Now That I Have Finally Sat Down, I Can't Keep My Eyes Open

Today was insanely busy.  Perhaps I should have gotten up earlier.  Kaleb went to morning kindergarten instead of afternoon as usual because of the Jump for Heart thingy the school does every year.  All the kids jump rope, and try to raise money for the school.  I never have participated in it, but every student still jump ropes.  His teacher told me he did actually jump rope a little.  He kept telling me he wasn't going to, and did not want to do it.  I told him he didn't have to, but Riley was pretty adamant that he had to.  Whatever.
I picked him up and went to the craft store.  I went in to buy hooks for that plaque I made my grandma (her party was canceled due to her getting pneumonia and bronchitis, and isn't going to be rescheduled), so I can finally take it to her tomorrow.  While I was there, I got distracted and got some other things as well.  I'm good at that, but I like to make things.  Sometimes.  I've just been feeling crafty lately.
Then, I had to run Kaleb home, and go back to the school to pick up Zachary.  He had a dentist appointment today.  We no longer have to turn his spacers.  Now, they just sit for six months.  Hopefully they will come off in September.  The bottom one will stay for longer until his 12 year molars come in and start moving things around again.  Yippee.  At least I don't have to remember to turn them any more.  I'm so glad about that.
After the dentist, I took Zach home, and then I went to the scout office.  Kurtis and I have been asked to volunteer in cub scouts.  Kurtis is the Assistant Cub Master, and I am the Assistant Den Leader for the Wolfs.  Scouts is never something I ever thought I would enjoy, and accepted the request with a gritted smile.  Oh, sure.  I suppose I could do that.  But guess what?  I actually think it is fun.  Duh!  Scouts is all about fun.  In the training Kurtis and I went to, they kept repeating "Keep it simple.  Make it fun."  I had no idea I would have to have a criminal background check, though.  That's awesome!  The idea of me having a criminal background is laughable.  When I was a kid, I was too scared my parents would actually kill me if I ever did anything illegal to do anything criminal, and now that I am a mom, I don't really have time for a life of organized crime.  Tonight was the Blue and Gold Banquet, and I thought it would be a good idea to at least have our shirts for it.  I didn't have time to sew on any of the patches.  Truthfully, I haven't even sewn on Zach's yet!
Then, I had to go back to the craft store because I forgot to buy some face paint for our Wolf Ceremony.  Then, I ran to the grocery store to buy some milk, and hamburger meat.  We were out of both of those.
When I got home, I had to put the finishing touches on the knight costumes my Wolves had made at Den Meeting last week.  I punched holes and threaded some yarn to put them together.  Zach made one, too, and Kaleb wanted to make one as well.
But the awesomest part of the whole evening for me, was that Zachary earned his Bear award!  Hooray for Zachary!  And I have to give a big shout out to my parents and brother Michael who came to cheer Zach on.  That was super nice. :) 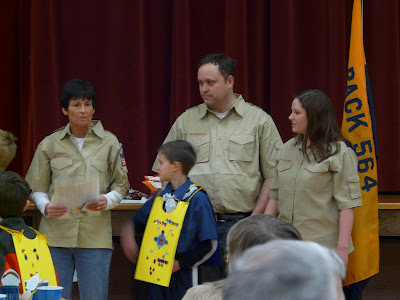 Here is Zach with his Scout leader.  She's so much fun.  I really think she does a great job with the boys.
The yellow poster board over Zach's uniform is the armor he made. 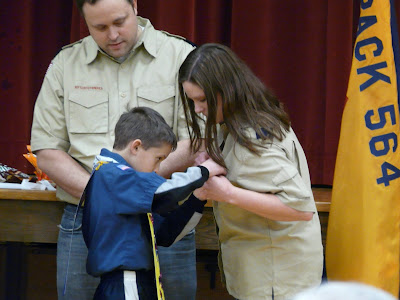 Here is Zach pinning my awesome pin on me! 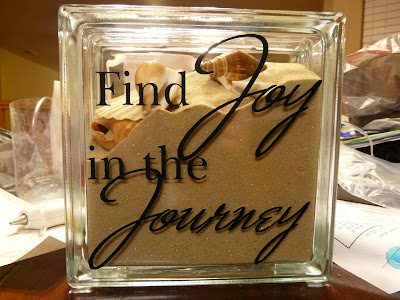 Remember how I said I went to the craft store?  This is what I made.  I had a bunch of sea shells in my light house themed bathroom, and Riley always plays with them when he cleans it, so I decide to put them in here.  Most of them got covered by the sand, but I think it turned out okay.  At least now, Riley can't pour water all over them and leave them there.  That kind of ticked me off a little when he did that.
Posted by sweetlissybug at 12:28 AM 4 comments:

Ode to My Hair Dryer

Hair dryer, my Quiet Styler
I shall miss your warm air
Blowing through my hair.
It's admirable, really.
The way you held on so long
You fought hard to stay on.
Fought till the end.
You were such a good friend.
Winters would be cold with out you.
You gave me warmth,
And took away the wet.
So, you have my vote.
If there is a hair dryer heaven,
You'll get in, I bet.
Posted by sweetlissybug at 1:12 PM 3 comments: