Well, the update on the birds is that the big brother has flown away (as far as I can tell). Hopefully he or she is finding a mate and having little birds of his own. Well, the mom and dad did come back. Lots of people have asked me about this. Let me tell you what I know. When was 17, I worked at the Bear River Migratory Bird Refuge as a Youth Conservation Corps Member. We mostly fixed broken fences or helped the biologist count birds or picked up dead birds who had died of botulism so it wouldn't spread, things like that. It wasn't glamorous, but I liked it. Anyway, when I worked at the bird refuge, I asked the biologist there about the parents abandoning their babies if they smell like people and she told me that wasn't true. We were catching and tagging birds at the time. I was wondering about it because I saw a Cosby Show episode where Rudy found some baby birds and was trying to fry up some worms for them on the stove and her mom asked her what she was doing and told her that. The biologist said parents probably tell their kids that because they want them to leave the birds alone.

Let me tell you what happened after I last blogged. I asked Kurtis to get some bird seed along with the other few items he was going to get from the store on his way home, so we could help Big Brother not starve. I went looking for him after dinner that evening and couldn't find him at first, so I was just going to put the food by the garbage can and let him find it later. He was behind the garbage can! I went to put the food next to him and he flew into the middle of the road. He was just going to sit there, so Kurtis said I should try and get him to fly back over to the house (oh, and he wasn't flying very high, more like a hover, but he could go a good distance for a little guy). So I went to nudge him gently (I was really worried I was going to hurt the poor guy!) with my foot and he flew the rest of the way across the street into the neighbor's yard. So I let him be, just left him the food and water, and went inside. The next day, I went to see if I should just get rid of the food and take my bowls back inside, and he was back. I could tell he'd eaten some of it because there was food around the bowl. I left the bowl there, and went back inside. I came out a few hours later to check on him and he was gone. So I figure he flew away for good because we haven't seen him since. But now Zachary really wants a bird. I've decide to look into it. He has to take care of it, though. That's the thing that we are apprehensive about. We don't know if he is responsible enough and will rise to the task. And I don't know how much it will cost, yet, so we'll see.
Posted by sweetlissybug at 8:37 PM No comments: 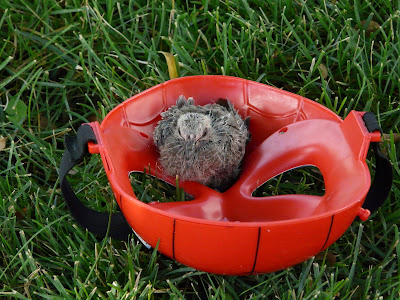 Well, we had an interesting morning today. Let me tell you about it. I was just working out on the excersize bike (I wish it was a treadmill), minding my own business (it's a little after 10 by now probably) when Zach comes running into the house (or was it Riley - I can't remember) yelling, "Mom! Mom! There's a baby bird that fell out of it's nest! Come out and see!" I said that I would when I was done working out because I only had like fifteen minutes left, but not to touch it because I didn't want it to make them sick. He said okay and ran out the door. Then, they come in and Zach has the poor, terrified creature on his Spiderman mask. They want to keep him! "Um, get that thing out of my house right now!" I yelled, fighting the urge to go kick their butts right there (I'm still working out). Couple of crazies. After my work out (which suddenly seemed like twenty minutes instead of five minutes later), I went to see what they were doing. They are so cute. They were digging for worms to feed him. Aww! "No! You don't get to feed him!" I have no idea what he eats. So I go over to the tree and look up. There in the nest is the daddy bird sitting so quietly and calmly trying to be invisible. I took pictures. They are posted below. I know it's the daddy, because I looked it up (after, duh). Any way. I put on my gardening gloves, get out the ladder and try to get the daddy to fly away, so I can put the baby back in his nest. The dad doesn't budge. But then Zach decided to climb the tree. He scared the daddy bird away and as I climb the ladder, I see why he did not want to leave. Baby has a Brother (or sister, I know, but I have all boys - these are boy birds. I'm the author; I decide!). Well, putting Baby back scared Brother, so now I have the situation I didn't want. There is a baby bird on the grass in my front lawn. Yep, I scared Brother so much he tried to flee. Great. Well, I'm not picking up the other one, too. So I've been keeping an eye on him. Daddy came back to the nest and everything is fine for Baby. I really hope Brother makes it. We may have to adopt him and feed him until he can fly. The kids would love that! So, I did a little research on the internet and compared my pictures to the ones on the internet and the birds are Mourning Doves. Very interesting. They eat mostly seeds. The ones in the trees are not squabs, so much as they are juvenilles. (Great, I'm not sure if I'm ready for a teenager!) The dads nest in the midmorning until late afternoon and the moms nest in the evening and nighttime. How's that for cooperation! They work together. When the dad flew off the nest, the mom was right next to him, pecking at him yelling (not really), "Why did you fly away and leave my babies to die!" She did peck him on the head, though. Here are the pictures I took:
The pictures are mislabeled and it's driving me nuts, but for some reason, I can't fix it. The caption on the side of the first picture goes with the second picture and the caption on the side of the second picuter goes with the third picture. Sorry for any confusion.

This is Baby in Zach's Spiderman mask. He's so cute! 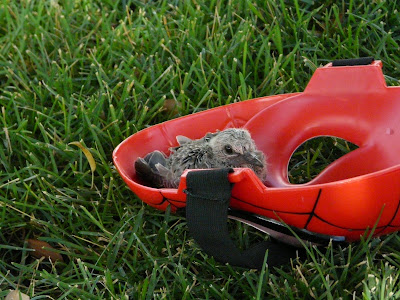 This is the daddy, but I thought he was the mommy! 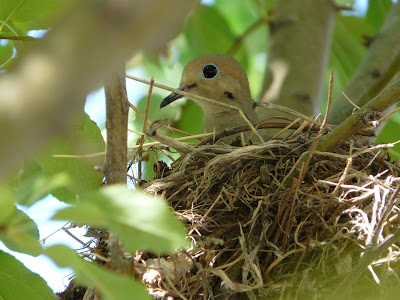 This is big brother! He's pretty scared I bet. 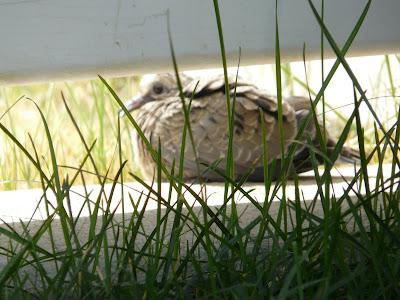