Mirror, Mirror, Hanging In the Sky

Today, something amazing happened, and I got to see it!
A few months ago, Kurtis surprised me by telling me that there was going to be a solar eclipse on August 21, 2017. Then he surprised me even more by telling me he wanted to go see it.
We got our eclipse glasses and eagerly awaited the day the eclipse would arrive. Then his boss told him that there was going to be construction in Idaho and we would be in bumper to bumper traffic for a long, long time. Because everyone is going to go! We decided we would travel 6 hours to Ontario, Oregon. Then Kurtis started watching and reading news posts about how this was basically going to turn into the apocalypse. We would be stuck in bumper to bumper traffic, and the gas stations wouldn't have any gas, and we would be stuck in Idaho for who knows how long! It was terrifying. Suddenly he was anxious and talking himself out of going at all.
I said, "No! This was your idea! We have to go. It will be awesome!"
We changed our plans. We would still leave super early, but instead of driving 6 hours (he was convinced it would be 12) to Oregon, we would drive 3 hours to Idaho Falls. Then he watched more news and read more articles about that chosen route and freaked out again. We settled on Shelley, Idaho. It was still in the Path of Totality, but not so far north as Idaho Falls.
This morning, we woke up at 3 am and got ourselves ready to leave. We packed a cooler full of drinks and a cooler full of lunch food. We also packed a cooler full of drinks special for lunch and promptly forgot to put it in the car. By 4:30, we were on the road! Kurtis wanted to stop in Brigham City for gas. We didn't need to stop, so we thought, we'll stop in Tremonton for breakfast. It was 5 am. The boys were asleep in the backseat (except Riley), so we decided we would keep driving. We made it to Pocatello by 6:30 am and stopped at a cute cafe across from Idaho State University for breakfast.
We made it to Shelley by 8:05 am. It did not take us 6 hours to get there. We stopped at a place fishermen could park their cars next to the Snake River, but after a few minutes, I realized there weren't any bathrooms there, so we needed to find another place. We found a park super close to our original parking space and stopped there instead. Then we waited. And waited. Zach fell asleep because 3:30 is not his favorite time to wake up. He claims he actually woke up at 1, but couldn't sleep, so he gave up and just played on his phone. Well, I get that. I couldn't sleep either and maybe got 20 minutes last night. I played Candy Crush.
I tried to sleep at the park, too. Ten minutes later, I woke up. So Riley and Kaleb brought out the candy and we ate a bit of that. It was such a beautiful day! Kurtis stayed in the car and read until Kaleb told him to play badminton with him (we brought our rackets and shuttlecocks).
At 10:15, the show started. The moon slowly started to cover up the sun. I loved watching it. I loved it. At 11:33, we had totality for about a minute, and Kaleb shouted, "That was the best thing I have ever seen in my entire life!"
So you see. Some things are worth risking the apocalypse for. It was amazing and completely awesome. I want to see another one. Also, we were fine driving home. Traffic was not great in the beginning (for maybe the first 20 minutes), but after we got on the freeway, we were going freeway speeds. We ate lunch at the park after, and left about 12:30. We were on the freeway by 12:40 and then the slow and go was minimal after that. Don't talk yourself out of doing epic things. They are epic for a reason. The next total eclipse will be in 2045. You can bet future 70-year-old me will be watching.
I took pictures. They aren't awesome or anything because I didn't have a cool filter for my camera. But here they are: 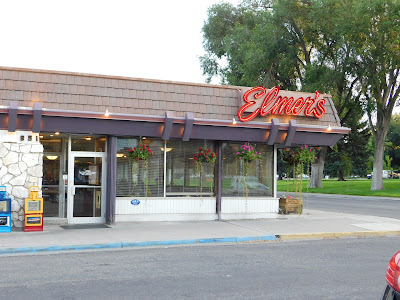 This is the cute cafe where we ate breakfast. 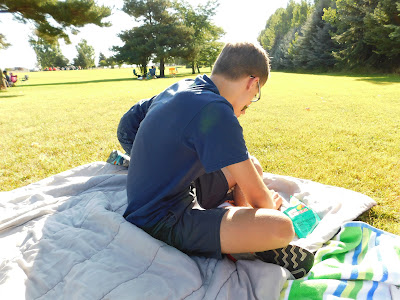 Kaleb hides behind Riley as they avoid the camera. 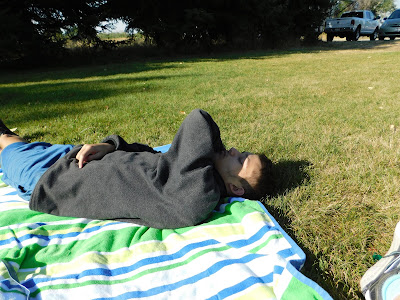 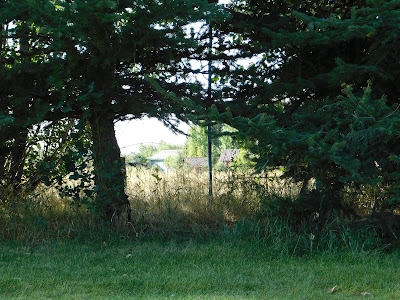 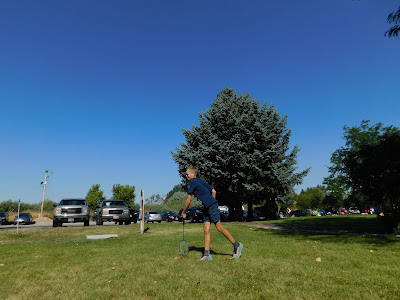 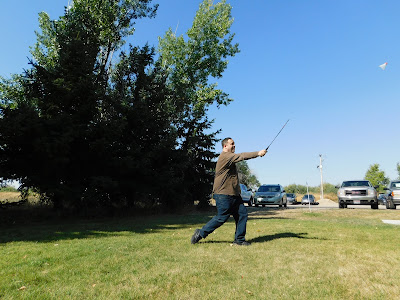 Kurtis, hitting the shuttlecock. It's in the air on the right. 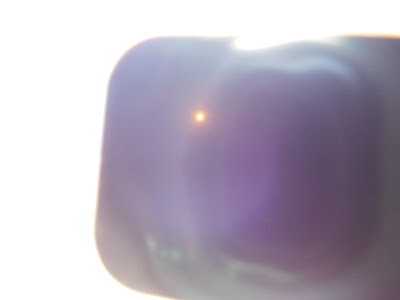 Once the eclipse started, I had Riley hold my eclipse glasses over the camera lens to see what would happen. That little tiny orange dot is the sun. 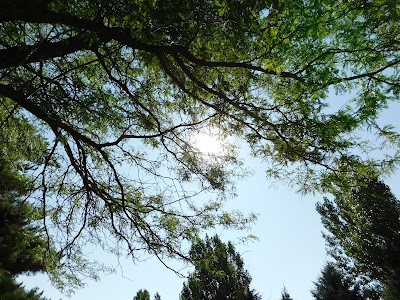 The eclipse is happening! 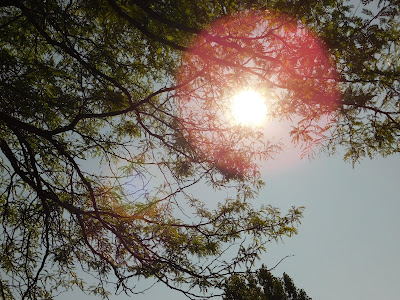 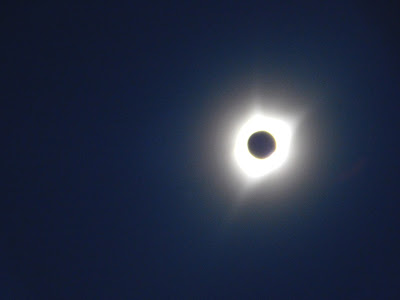 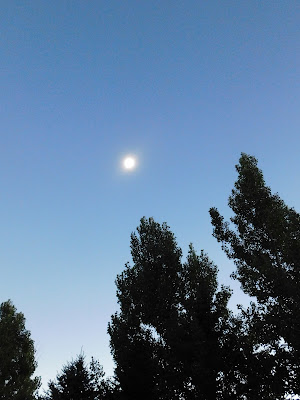 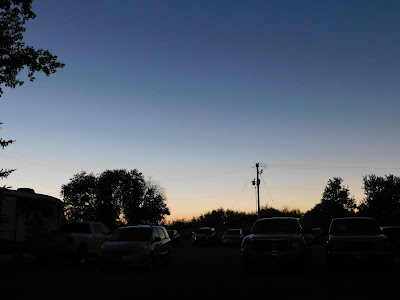 It looked like the sun had set during totality. 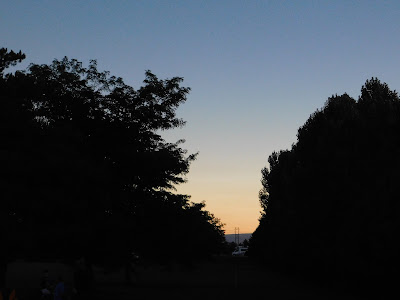 It was so beautiful. 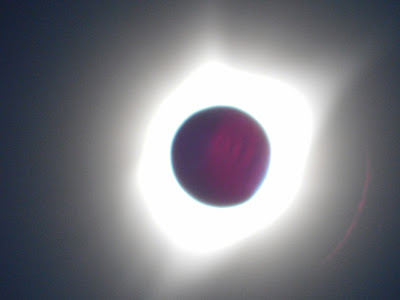 Zoomed all the way (as far as my camera would zoom). I kinda think it's red because it might be the same kind of thing that happens when you get red eye. I don't really know though. I could be wrong. 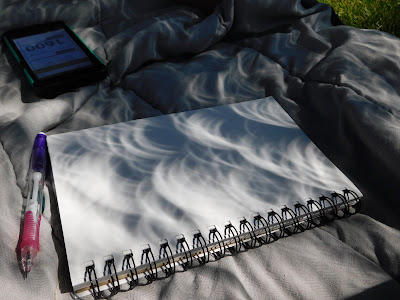 Another cool thing we noticed. The light that filtered through the leaves of the tree we were sitting under created little eclipse shadows on our blankets and Zach's sketch book. It was so cool!

Well, that was our adventure for this summer!
School starts Wednesday!

And now, for your listening enjoyment:

Posted by sweetlissybug at 9:21 PM No comments: