You gotta love Utah.  It's gorgeous here.  But the seasons don't gradually change here.  Yesterday, the high was 83 degrees.  It was beautiful and the sun was shining.  It was windy, though (it felt really nice).  A sign of what was coming I suppose.  Today, it's 43 degrees.  That's a 40 degree drop in one day!  It's supposed to get up to 48 degrees, but don't hold your breath.  And, it's been raining pretty much all day.  At one point, it hailed!  I just wanted nice, cool weather for a spell before the snow.  It's crazy.  But what I really want to know is why boys don't want to wear coats.  I told Zach and Riley that it would be cold today and they needed to put away their shorts.  I helped them get out their pants and find long-sleeve shirts.  Then I said, you should probably wear your coat today, too.  Apparently, they didn't listen.  When they got home, Zach said, "I didn't think it was going to be that cold."  Kaleb and I went to visit a friend this morning.  I said, "Do you want your coat?  It's cold out there."  He said he just wanted his jacket.  He's smarter than his brothers, but not smart enough.  Before we were even passing the next door neighbor's he said, "I'm cold."  Of course, as a mom, my favorite phrase is,"I told you so."  Lucky me, I got to say it to all of my children today.

P.S. If anyone knows where they moved spell check to on this thing, please let me know.  I really miss it.
Posted by sweetlissybug at 4:31 PM 2 comments:

I Must Be In a Mood Today

I just saw an ad on my facebook page.  You know, the ones along the side.  It said, "Obama says get a degree."  My immediate thoughts were, "Obama doesn't get to tell me what to do."  Then I was thinking about how when I was a kid, I thought adults could do whatever they wanted.  I was always being told, "No!  Don't do that!", or "No, you can't have that."  I figured when I was an adult, I would be able to do whatever I wanted.  Unfortunately, this is not the case.  Now that we are grown-ups, we realize this fact.  But I worry that my kids think adults get to do whatever they want.  We have a rule (for the kids only) that there is no food or drink outside of the kitchen.  But Mr. Jones and I can take our food and drinks where ever we want to.  Double standard? Maybe.  Or maybe it's an example of adults getting to do whatever they want.  To those of you who have kids, the reason for the rule is obvious:  Kids + Food or Drinks = Mess.  That means that the floor you just mopped, will automatically have another spill on it as soon as it dries.  I'm serious.  This happened to me so much I wondered why I mopped the floor at all, and I handed the duty over to my 8 year-old.  He really sucks at it, but it's better than the floor only being mopped on special occasions.  He also does toilets because I was tired of the poor aim my three boys seem to have.  Hey!  I didn't make that mess, why should I clean it up?  So here is my master plan:  Soon, I will have pawned all my chores onto my sons and I will be able to do whatever I want.  Ha ha ha!  Evil and sinsiter laugh.  It's my right as their mother.  Children need to get used to working because they will be doing it for the rest of their lives! More evil laughter.
Posted by sweetlissybug at 1:12 PM 3 comments:

Ghost in the Graveyard

I decorated for Halloween yesterday. The kids get really, really excited about this, and all they could talk about was Halloween stuff.   That, I suppose, brought on this converstation with my son:
Riley said to me, "Ghosts are real."
"Are they?" I replied.
"Yes, but some people call them 'spirits' because they don't believe in them." 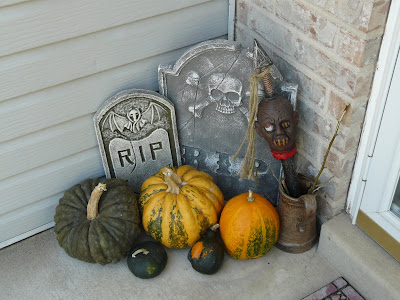 Posted by sweetlissybug at 3:19 PM No comments:

Some people think Halloween is too scary for little kids. Kaleb and I were looking at costume websites, and found this costume. He got so excited. He said, "Ooooo! I want to be that for Halloween!" 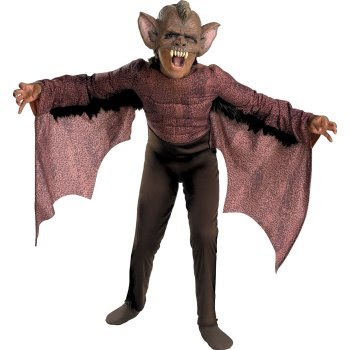 Frightful! He's a kid after my own heart! Ha ha!
Posted by sweetlissybug at 9:46 AM No comments:

Then Labor Day Came and Went... 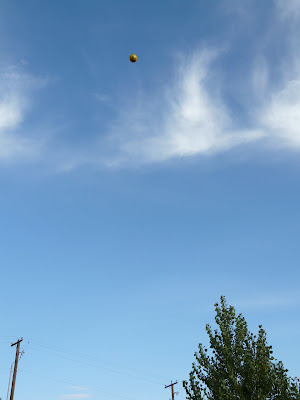 Just to prove that I am not a total hermit, I am posting pictures of what we did on Labor Day. About 20 minutes away from our home, there is a little town called Mountain Green. It's mostly farms - or ranches. I didn't really see many crops growing. My oldest sister would love it. But there is a small park there nestled between the mountains. It's gorgeous. I only know about it because the Kaye Starr Singers performed there in June or July. We had a picnic dinner and then played on the swings and kicked the soccer ball around. Yes, even I did. So I am not a total stick in the mud. Enjoy the pictures! There are a lot of them, but they were just all so cute! Except the ones of me. You can just skip those. 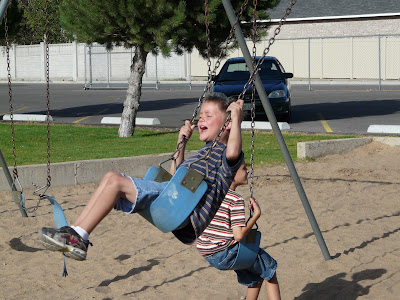 "Dad! Stop! It's too high!" The swing slows down. "Dad! Push me!" Seriously, kid. Learn to push yourself on the swing. 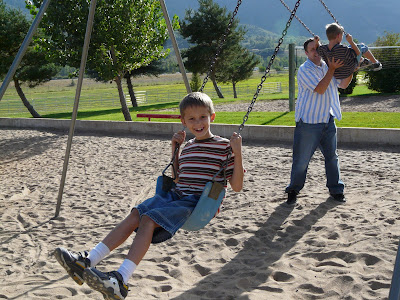 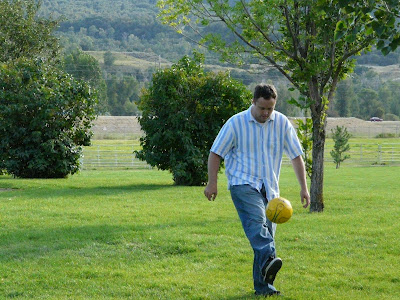 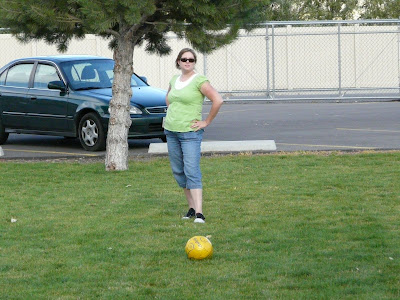 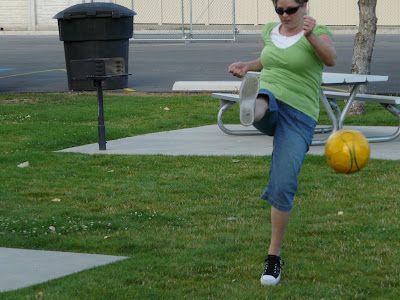 See! I can be playful! I can kick the ball. 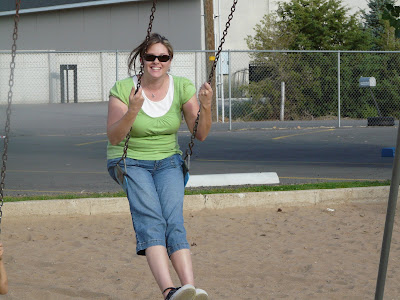 Riley didn't believe me when I told him he could push himself on the swings. So I proved it to him. That's enough pictures of me looking less than graceful. 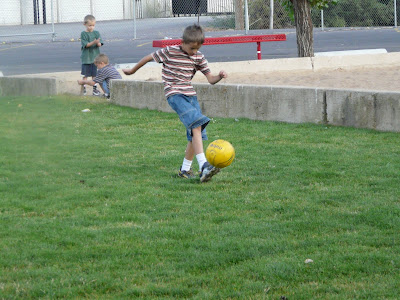 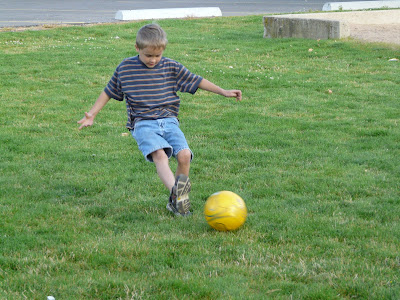 Riley not so much (at least that's what he says...) 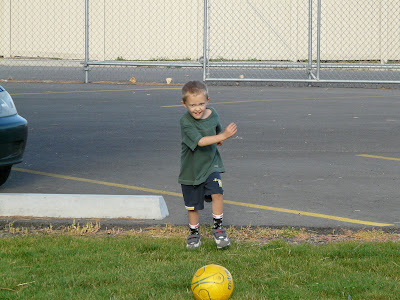 Kaleb loves soccer, too though! Look at that determination! 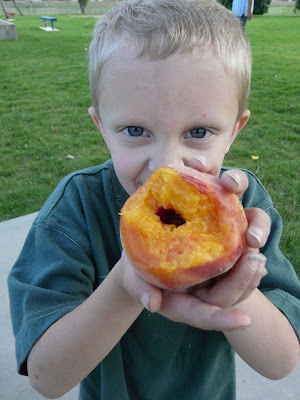 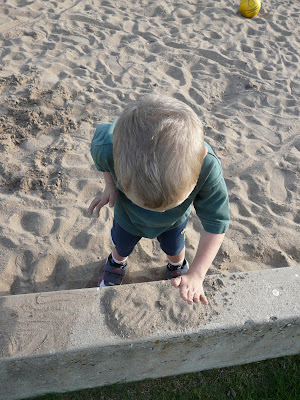 Kaleb told me he was making sand cookies. Yum! 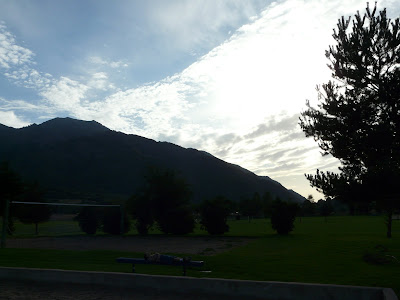 This picture is kind of dark. The sun was setting. But it's so pretty there. I just love Zach chillin on the bench. :D
Posted by sweetlissybug at 9:35 AM 1 comment:

For your amusement: Zach just said to me, "Mom, I wish we had a bacon tree in there (meaning the front room)." "Bacon doesn't grow on trees," was my reply. "I know, but if it did, I could just go pick some fresh bacon to munch on." Gross. I really, really don't like bacon. 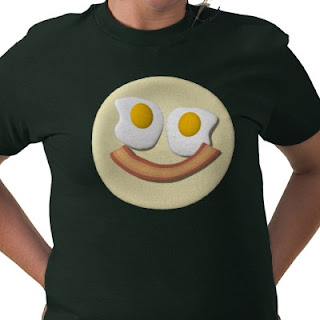 Posted by sweetlissybug at 3:54 PM 3 comments: