Always Bring A Banana To A Party

That's what the tenth Doctor says anyway...
I'm getting ready for Riley's birthday party.  He wants a Doctor Who themed party.  I made really awesome invitations.  Here.  Check them out: 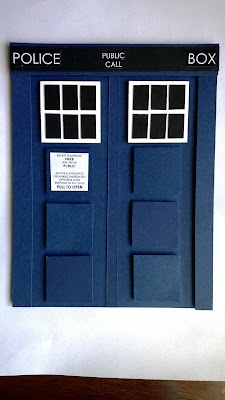 This is my first idea.  I thought it was awesome.  Then I went on Pinterest and saw some that opened.  I thought those were even cooler. 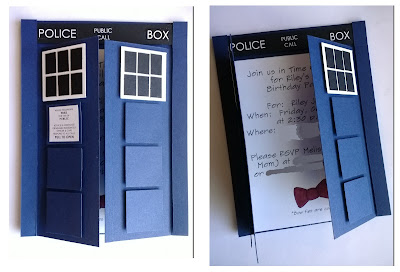 So they turned into this.  But I wasn't quite satisfied. 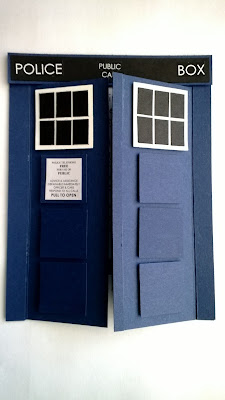 So it became this!  This inside is the same.  I'm really pleased with them.

I like throwing my kids parties as long as I don't feel too overwhelmed by it.  This means, I need to start planning things well in advance.  Thus, Riley's birthday isn't until October, but it is time for me to start the planning.  Invitations are done.  Sometimes, that's the hardest part for me.
I was talking with Zach and Riley (Kaleb was upstairs in his room) about their birthday parties.  Zach told me he wants a Minecraft party.  Which is fine.  But then I realized I need to ask Kaleb what he wants for his party.  He's after Riley.
So I asked Kaleb this morning before he went to school what kind of birthday party he wants.  Our conversation went something like this (but I can't remember everything exactly - I was still not quite awake):

Me:  What kind of party do you want for your birthday?
Kaleb:  I'm not sure.  There are so many kinds of parties you can have!
Me:  That's true.  You'll have to let me know when you know.
Kaleb:  I want... I want.... I want a MILK party!
Me:  What is a milk party?
Kaleb:  No, wait!  I want a cow party because cows make milk and you need milk in milk chocolate!
Me:  It sounds like you want a chocolate party.
Kaleb:  I want a cow party!  With milk chocolate!  Will you see if you can borrow Grandma's chocolate fountain?  You should just buy us a chocolate fountain!  Then we can use it whenever we want!

His last party was a chocolate party.  It was awesome.  I guess if it ain't broke don't fix it, right?