Daleks! Why Did It Have To Be Daleks!?

We watch a lot of Doctor Who in this house.  The boys really love it.  The boys were reminding me about the episodes called Bad Wolf and The Parting of the Ways (Season 1 Episodes 12 & 13).  Zach was telling me his theory of why the people were piles of dust.
Zachary:  I think that when they teleported the people, it just kicked up a lot of dust and made it look like they were turned to dust.

Yesterday was my birthday.  I am now 34 years old.  In Primary on Sunday, they sang to me.  It was really funny because I forgot they would probably do that and so when the Primary President said, "We only have one birthday this week and it isn't a kid.  It's a teacher!  Can you guess who it is?"  I realized what was happening and turned bright red.  I was caught off guard.  Then the Primary chorister said as I sat back down, "She's turning 25!"  I laughed and said, "Yep!  I'm going to be 25 - again!"  Ha ha.
Zach tried to guess my age once, too.  He said, "But Mom, aren't you only 28?"  I looked at him and said, "Do the math on that one.  If you are 12 and I am 28, how old was I when you were born?"  "Uuuum. 16?"  "Yeah.  I did not have any children when I was 16.  I hadn't even met your dad yet."
I had a good day yesterday.  I woke up to Kaleb saying, "Happy birthday, Mom!"  He also had a present for me.  Riley wanted to take my picture when I opened them, so I got on my workout clothes and let him take my picture while I opened this: 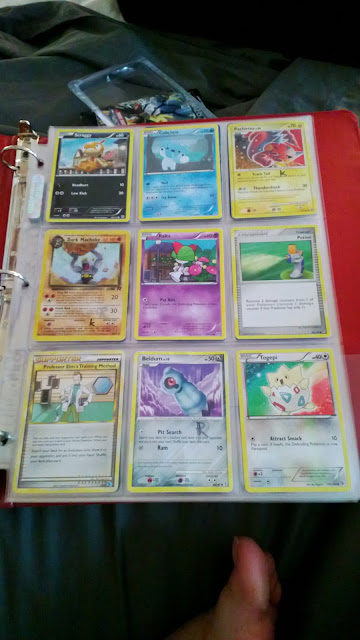 That is love.  He said he wanted me to have my own Pokemon cards so we could battle together.

Kurtis took the day off and while I worked out, cleaned my bathroom and got dressed, he took the boys (except Kaleb) to get their hair cut.  Riley got a buzz.  And Kurtis is always trying to touch it now.  It is soft.
Then Kurtis and I went to lunch.  We had to hurry, so we chose somewhere nearby, and Kurtis was feeling a little crazy, so we went to Subway (he never wants to go there, so much so that when I suggest it, I am usually just kidding).  Then we picked up the kids and went to see Despicable Me 2.  It was awesome!  Everyone should see it!  After that, we went and picked up some cupcakes for after dinner.  Then we went home and I opened my presents.
Kurtis got me a Tardis cookie jar, ninja-shaped cookie cutters, and two cds.  He spoiled me this year.   The Tardis cookie jar lights up and makes Tardis sounds.  The kids won't stop playing with it. :D  The cds are Mumford and Sons' Sigh No More and Of Monsters and Men's My Head is An Animal.  I love them both!
After presents, we went to dinner at Costa Vida.  I love that place.  Then we did a little shopping at Target.  We are having a party on Sunday.  Then we got snow cones (Kurtis's new favorite thing) and came home and watched Jurassic Park.  I realized the kids had never seen it and thought, but they must!  I ordered a copy and it arrived on my birthday.  They loved it!  I told them it would be suspenseful.  We had so much fun doing that, we forgot to eat my cupcakes.  But I had mine with my lunch today.  It was a Skor cupcake.  So yummy! 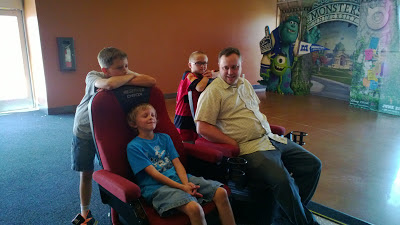 While I got the tickets, Kurtis and the boys tried out the D-box seats.  They are pretty cool. 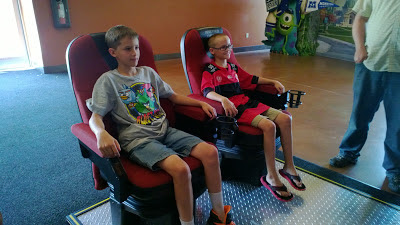 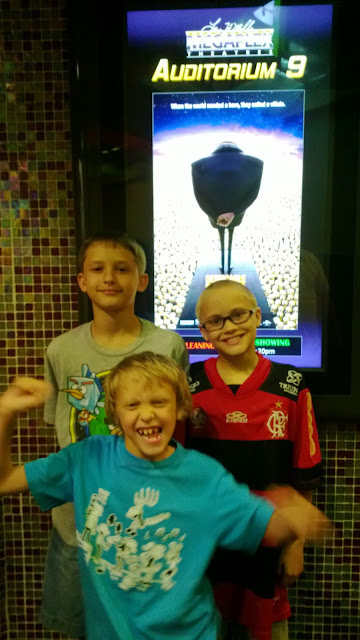 After the show.  They really liked it. 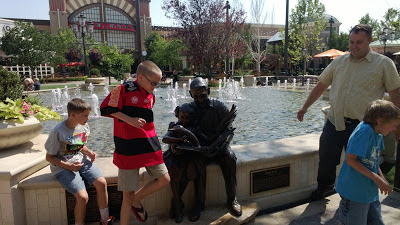 Playing in the fountain by the cup cake shop. 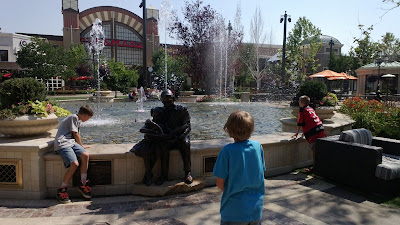 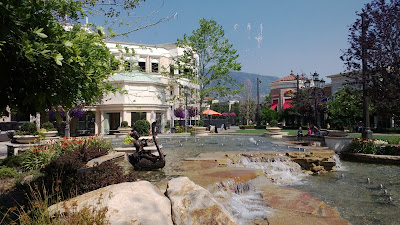 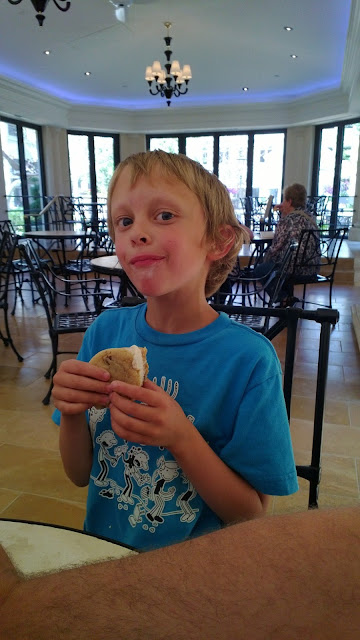 Kaleb didn't want a cup cake.  He wanted an ice cream sandwich.  So I made him eat it there.  I didn't want it to melt all over the car. 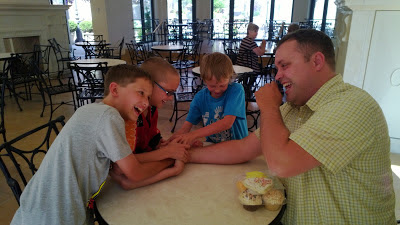 It takes all of them to defeat Daddy!