I have two New Year's resolutions.  I don't usually make them.  Because I get disappointed in myself when I don't keep them.  This year, they are simple.  Well, one is.  The other will require much determination and restraint on my part.  The first is that I want to floss every day.  Everytime I go to the dentist they ask me if I floss or not.  Usually the answer is sometimes, but not very often.  I want that answer to change.  Especially since the hygenist told me I was getting gingivitis.  Not cool.  The other resolution is quite typical of most people.  I want to loose 30 pounds  by my birthday.  Maybe 31 because I will be 31.  That's seven months away, so I figure if I loose one pound a week (which is a healthy, amount of weight loss),  I will have lost 28 pounds by July.  That's a number I can be happy with.  I gained 10 pounds last year, so I am that much further away from my goal weight.  It sucks, and discourages me, but I will not be a size 16 ever again!  So the weight gain has to stop right now!  I guess I should expand my list to other areas of my life, but right now, that's pretty much all I can handle.

On a completely different note, my cell phone has died.  There was a point where I could answer it if someone called me, but then, Kurtis called me and he could hear me, but I couldn't hear him.  It was weird.  Now, the phone doesn't ring, or notify me if I get texts.  I was quite upset.  I liked my Samsung Blast, and I had only had it for two years! :(  I ordered myself a new phone and will hopefully get it before the end of the week.  They should ship it today.  Then, I will be back in communication with the world!  This is my new phone: 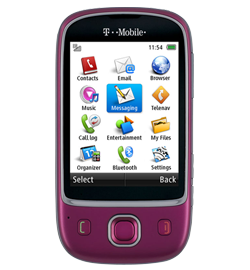 I hope I like it!  I've never had a touch screen before, so I may hate it for a few days while I get used to it.  I was using Mr. Jones' phone on New Year's Eve (the day my phone broke for good), and I wanted to throw it out the window.

Posted by sweetlissybug at 10:40 AM

so i'm catching up on blog posts and the frog story has me gagging a little. but if i told you how often i usually floss, you might gag a little. so good job on the ressies!

I hope you reach your goals!! That would be awsome, I did not make any resloutions this year :( I have a touch screen and love it!! My husband on the other hand does not. Hope you like yours!