So tonight, we had what we Mormons call Family Home Evening.  We're supposed to have it every Monday.  Something about building relationships with each other as a family and building a strong bond.  It's a good thing I suppose.  I'm getting better about doing it.  Any way,  That wasn't the point.  I was just bragging a little bit there. (Hee hee!)  So today, I was screaming mad at the kids because they wouldn't stop fighting and Zach didn't do his homework right away like he's supposed to, blah, blah, blah (the list is much longer and another blog post in and of itself), so I opened up Zach's scout book and said to Kurtis, "For Family Home Evening, I want you to do all of these!"  And pointed to achievement number 9.  "I'm going to do the dishes.  Have fun."  Then we realized Zach wasn't done with his homework yet, so we had to finish that first (ARG!).  When that was over, Kurtis began talking to the boys about safety and responsibilities.  Achievement 9 is the one where you talk about the things in your home that can kill you.  Kurtis told them about why we should be safe and what to do to be safe.  He showed them where to turn the water off and where the circut breaker is.  Then he showed them where to turn the water off under the sink.  Then he came to the stove.  We have a gas stove, and he spoke to them about how gas is a good thing, but we have to be responsible with it.  He's good.  He tied everything back to being responsible.  He explained to them that natural gas is flammable and the whole house could blow up if it there was too much gas in it, and that if you breathed it in for too long you would suffocate.  Riley's eyes got really wide.  I could tell he scared him a bit. (Yes, I am laughing - it's funny!)  Then Kurtis tells them that's not going to happen; you know tries to calm them down.  He turned on the gas and had them smell it and asked them what they should do if they are upstairs playing or downstairs and smell gas.  They looked like they weren't sure, so I said, "Get out!"  And Kurtis said, "Tell us you smell gas, and then get out."  The rest of the night, Zach and Riley kept coming up with worst case senario situations.  It was pretty funny.  I remember when my parents would do this for FHE, and it would always freak me out!  I was afraid my house would blow up for days.  I got to hear it five times too because I have five brothers.  Ah, the joys of parenting.  And so I pay homage to a more innocent time with these pictures.  Families are forever, so you'd better be nice! 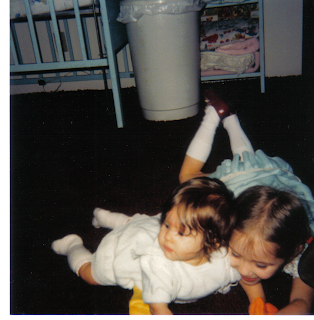 Me and my big sister, Michele.  It was 1980, and I was 6 months old.  We're still pretty much like that, except she lives way too far away in my opinion. 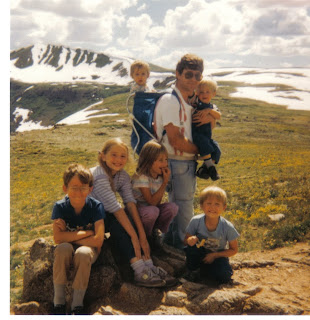 That's me in the purple pants.  Emily and Ben weren't born yet.  So it's Ryan in the front, Michele, Me, Michael, and then Jeremy in the baby carrier, my dad!, and Rodney in his arms.  The back of my picture says it was July 2, 1986 at the Continental Divide, Independence Pass.  I don't know where that is, but at six years old (I wasn't 7 yet!), I was pretty much just along for the ride! :) 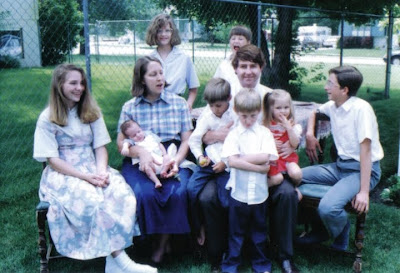 Here's the entire clan in our backyard.  It's August 1991.  Michele is on the left, Ben is in my mother's arms (she's trying to control Rodney who has his arms crossed), Jeremy and Emily are on Dad's lap.  He must have taken his glasses off for the picture.  Ryan is on the end, and that's me and Michael in the back (don't ask what he's doing.  I can't figure it out).  I hate those glasses, but when I got them (in 4th grade) I really liked them.  I got better frames later in the spring 1992.

Posted by sweetlissybug at 12:13 AM

i LOVE old pictures. and yours are fabulous. that one with your dad and the kids and the beautiful sky? awesome.

also, your boys are not alone. i am totally afraid of gas leaks or someone accidentally leaving the gas on. yikes!

Wow-thanks for the memories. I wish I wasn't just a selfish teenager for half of those. We look kind of like an interesting bunch. How did you manage to get copies of the "good" pics? hahaha Do you think dad took his glasses off for the photo or because someone kept trying to take them off? Do you remember who took those pictures?
Aah cub scouts. :)