I Don't Have Any More Babies!

I have had the best last two days!  I will just tell you about Friday today, though.  Too much at once makes for very long blog posts that nobody really wants to sit around for.
Friday, December 14th, my baby turned eight years old.  Yeah.  He's getting so old! :D  I love him so much. Wednesday, my sister and her family flew in from Minnesota.  Our little sister got married yesterday.  I thought it would be cool to baptize Kaleb while they were here, but I wasn't going to plan a baptism and try to upstage Emily's day or anything while all of our family was here, but my mom said to do it.  I asked my sister how she felt about it and she said she didn't mind at all and that it made sense to baptize Kaleb while everyone is here.  So I got with our Primary president and we conspired to break the rules a little.  Yeah.  That's just how I roll.
Traditionally, in Utah (because there are so many LDS children here), a child who turns eight gets baptized on the first Saturday of the month.  That's just the Saturday that the church has set aside to baptize all the children in the local congregation who turned eight the month before.  That means sometimes there are a lot of baptisms in one day and sometimes there are not, but at least the need to fill the baptismal font doesn't occur everyday and we can save water and allow those whose position it is to attend the baptisms can have time with their families and not always be at the church at a baptism.  Technically, though, there are no rules about when you can and can't baptize your child as long as they are eight years old.  So I'm really not as rebellious as I like to make myself out to be. ;)
Back to Kaleb.  I was a bit reluctant to let him get baptized at all, to be honest.  I didn't think he was ready.  Getting baptized means that you are ready to be held accountable for your actions and allow the repentance process to bless your life.  For the longest time, he blamed everyone and everything around him for all of his problems.  He still does this to some extent, but he's getting better.  I found a couple of books to read with him about baptism, and I think they helped prepare him for his day.
As I was reading these books with him, I also had a revelation:  Who am I to decide if he is ready to be baptized?  That is between him and the Lord.  He wanted to be baptized, so I needed to let him.  He needs to learn and grow by making his own choices.  Duh.  That's what agency is all about, Melissa.  I realized I wasn't doing him any favors by holding him back.
So Friday, December 14th, my baby turned eight years old.  But he also became a member of the Church of Jesus Christ of Latter Day Saints.  He was so happy that day.  He was so excited to have all of his cousins with him at his baptism.  He really doesn't like being the center of attention, but he handled himself really well when everybody came up to congratulate him after.  Kurtis told me he held his hand really, really tight and wouldn't let go.
After the baptism and confirmation, we went back home and had soup and sandwiches for dinner and talked and watched Kaleb open his presents and had cake and ice cream.  It was a really, really good day.  I'm so happy for my little man.  He really is quite special.  Even if he does still draw on his bedroom wall.  :) 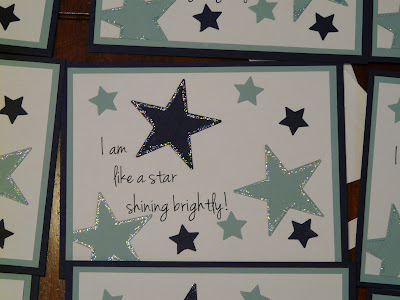 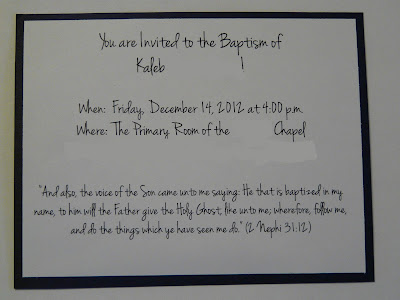 I like to put a scripture on my invitations. 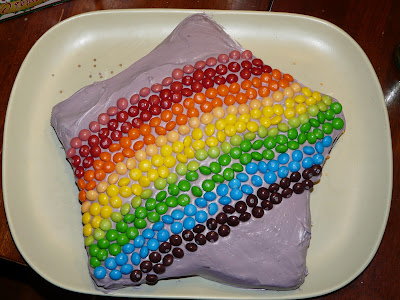 So I didn't get the chance to get any pictures of him in his white baptismal clothes, but I did get the cake!  What's more important than cake? 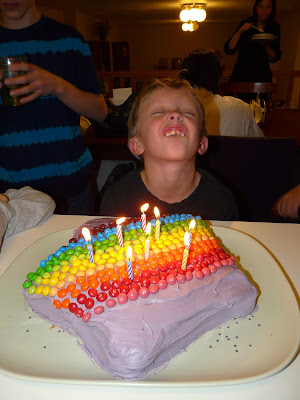 He really liked his cake, too. 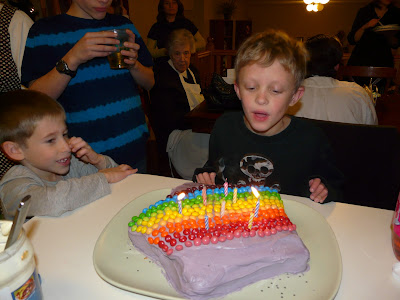 He blew out his candles.  It took him three tries, so I guess that means he has two girlfriends.  That's what Isaac said anyway. 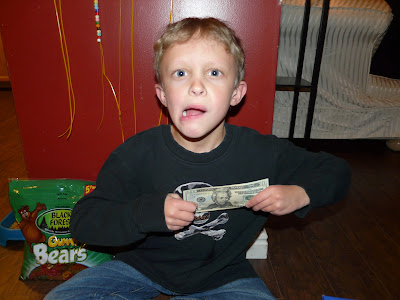 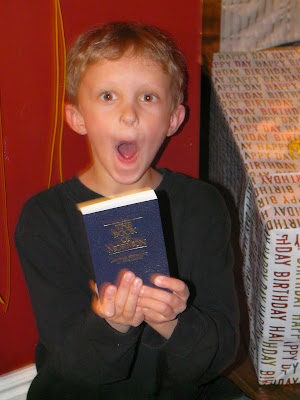 Kaleb doesn't like to have his picture taken, so I think that is why he makes faces.  He knew I was going to take pictures, so this is his way of controlling a situation that he has no real control over.  I don't mind.  I think the faces are great. :) 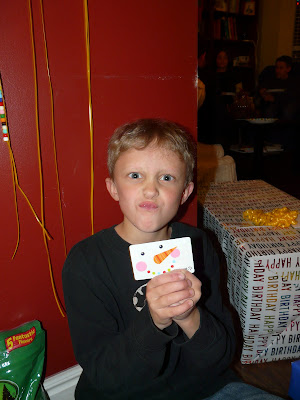 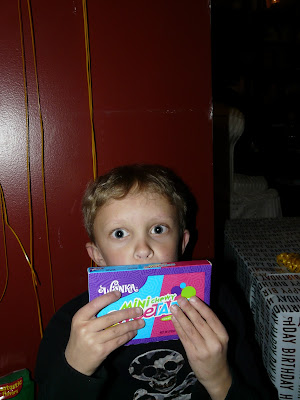 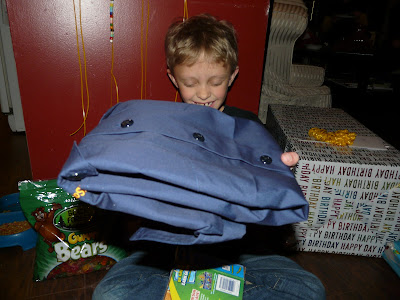 Oh, yeah.  He's my cub scout now, too.  This is going to be interesting. 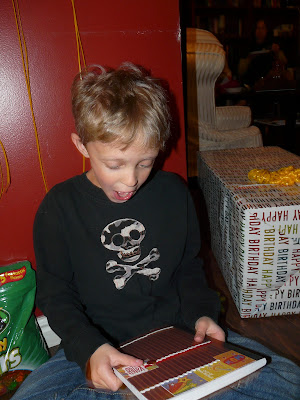 Aunt Michele made him a journal.  He likes writing in his journals. 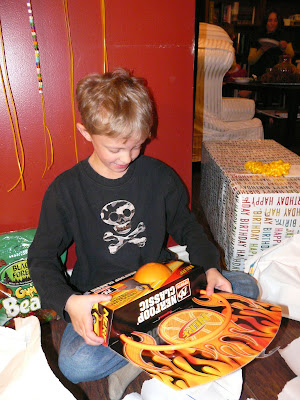 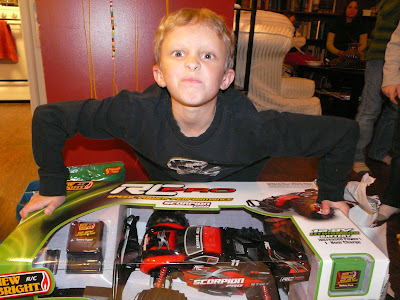 He's been begging us for a remote control car for a very long time.  Kurtis helped me pick it out and he really wanted to get him the big one.  Whatever.  It is way cool, though, so I suppose he was right. ;)
Kaleb likes to draw.  He likes to sing, but if he knows you are listening then he will stop.  He loves to write in his journal and he loves to play video games.  He doesn't like to read even though he is good at it.  He makes us laugh and he loves to be with me and give me cuddles.
Posted by sweetlissybug at 6:37 PM

Again, so glad we could be there! It was a great baptism and birthday party. Happy 8th birthday Kaleb!