I Lovely Love My Family! 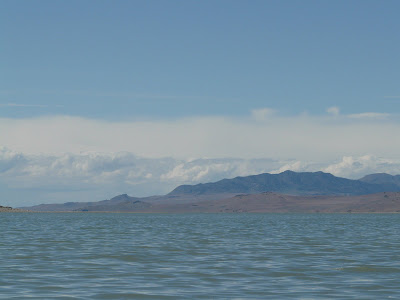 Yes, I watch too much noggin!
It all started on Thursday afternoon. I found out that two of my friends were in Treasure Island, and I just had to go and see them. But the only show available was Thursday at 4:00 p.m.! That is really not exactly a convenient time for me to go to a play. None of my friends were able to watch the boys, so I talked Mr. Jones into working from home. I took my sister with me because who wants to go alone! It was fabulous. The set designer is marvelous, and the play was a lot of fun (if you like pirates, and let's face it, who doesn't!). It was really awesome that I made my husband work from home because I had 6 dozen rolls to make for Saturday afternoon and he could help me out by getting the first two dozen in the oven for me. I finished the next two after the play.
My sister from Minnesota and her family arrived on Thursday at 2:30 in the morning. They drove the entire 18 hour trip in one fell swoop! That does not sound like fun. So, Friday, our whole entire family went to the Oquirrh Mountain Temple open house. It was so beautiful inside. I am grateful we had the opportunity to attend. Afterwards, we went to the Mayan restaurant to celebrate Ana's birthday. She turned 12! Ana is my niece. She's very nice. I like her, and she's growing up, and going to young women's now!
That evening, I went see the Heritage Theater's production of Snoopy with Riley and Kaleb. The cast of the women was supposed to all come and get together to watch the play. Well, not everyone was able to make it, but we had fun seeing those who could come. I miss everyone. The play wasn't half bad either. Snoopy runs June 5th thru the 27th! Go see it and take your kids because they will like it, too! Mine did.
Saturday, at 10:30 in the morning, my oldest son, Zachary, was baptized a member of the Church of Jesus Christ of Latter Day Saints. Just a note to those singers out there. Never sing at your own child's baptism. Have someone else do it. You will just cry the whole time. And it will suck. At least, that's what happened to me. But you live and you learn. That is what I learned. But I have to say, I am so proud of him. He is learning to choose the right and it is so wonderful to watch him grow and become more responsible. I love my guy.
After much eating and talking and laughing at the luncheon we had after (thus the 6 dozen rolls) the baptism, we and the entire family, went to Antelope Island. My sister wanted to go, and all my friends kept telling me to talk her out of it. I just have one thing to say to them. I had fun. They told me there were too many bugs, and they wouldn't leave you alone, and there isn't enough salt in the Great Salt Lake to float any more. Well, the bugs didn't come out and bother us until around 5 p.m., so we went to the visitor's center and ranch there. The bugs didn't bother us more inland. It was a pretty cool place. I saw lots of little brine shrimp. Riley swallowed some of the lake and decided it was really nasty. But Kaleb asked me yesterday if we could go to the beach again, so he had a really good time. Just go in the heat of the afternoon. But it wasn't very hot that day any way.
Sunday, was my sister's birthday, so after church, we went up to my parents' house where they were staying. We got out the chocolate fountain and I brought the leftovers from the day before. We had fajitas and chicken salad sandwiches. It was delicious. Then we dipped fruit in the chocolate. So yummy! We played Pig Mania! I haven't played that game since I was a kid. It's really a weird game. But my sister has a picture of me in the leaning jowl position or whatever it was called. Because we decided that whoever got one had to pose next to it in that position. I want a copy.
Monday it rained, and Kurtis took the car with out asking me, so I couldn't spend the day with my sister. I was not happy at all.
Tuesday, we went swimming. The water was cold. But the sun was shining. Then the wind blew and the sun went away. My kids said they wanted to go back to Grandma's. It started to rain just was we were leaving. But my sister and her family stayed an hour longer than I did and swam in the rain. I'm glad I left. Swimming in the cold rain does not appeal to me. After dinner, we watched my brother's Senior video. He graduated from high school June 3rd. Congrats little brother!
They left this morning. I will miss them. But it is so wonderful for them to have come all that way just to see Zach get baptized. It was a good week. 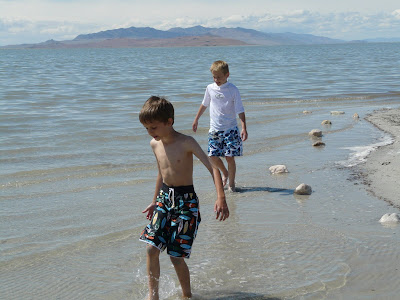 Zach and his cousing walk on the beach. Wear flip flops. There are rocks in the water. 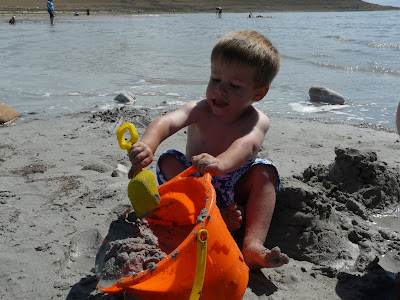 My nephew Henry, playing in the sand. 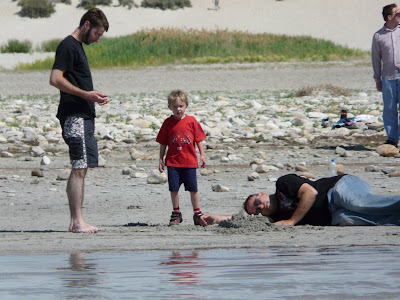 Kaleb with his uncle and Mr. Jones is sleeping on the sand. He took some Benedryl before we left. He doesn't remember much of this trip. 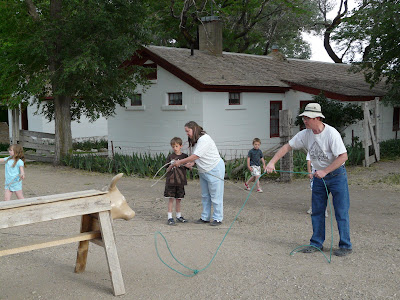 My dad the rancher. Ropin' cows. 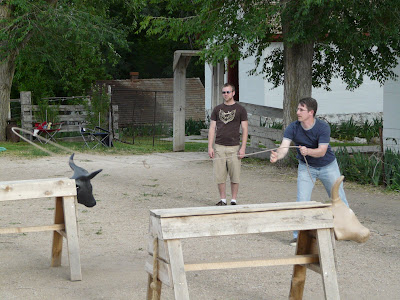 My brother-in-law is a great rancher too! No, not really. He's an accountant with skilz. 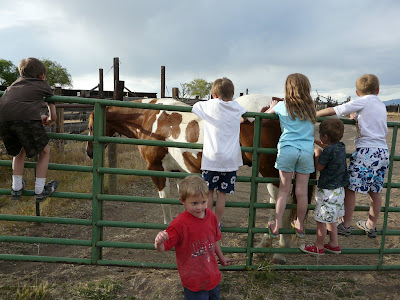 The kids loved petting the horse! He was hoping they had a treat for him! 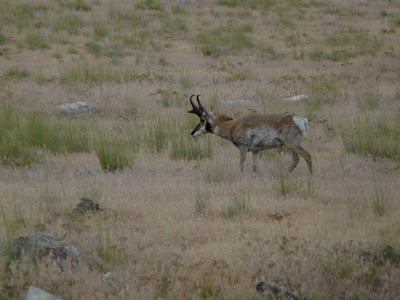 We saw some buffaloes and a few prong horns (antelope). Apparently you don't see the antelope as much as you do the buffalo. Which is weird because isn't the island called "Antelope Island"?
Posted by sweetlissybug at 1:52 PM

I love your pictures! Can you burn all your pics from our trip on a cd for me and send it? I'd like to make a movie with them.

I have burned them. I just need to have Zach do thank you cards and then I can mail the cd to you! :)