Sometimes, I find I really don't function very well.  Thursday was one of those days.  It all started Saturday evening when I got a message that went something like this, "Uh, Melissa?  This is Dad, Connie passed away today, so if you haven't sent Michele's Christmas present yet, you don't have to.  Michele will be coming soon."
My immediate response was, "What!?", and I got on the phone and called my sister.  Her mother-in-law passed away unexpectedly December 12, 2009.  She was 61.  Thursday was her funeral.  Most people would think an event like this would have little effect on me.  Well, she was my friend too.  I think I am finally ready to talk about this without falling apart, but I could be wrong.  We shall see.
My sister is married to Brian, who is the brother of my high school friend, Spencer.  Michele, Ryan, and I were all friends with him.  Michele and her family live in Minnesota now, so whenever they would come visit, I had to share her with her in-laws.  I honestly did not like this.  But you know, they wanted to see them too, so we would just all do things together.  It always turned out to be a lot of fun.  Connie loved to have fun, and never seemed to mind us tagging a long.  Our last trip with them was when Michele came for Zach's baptism.  We all went to Antelope Island.  It was a nice trip.  I didn't get to do much with them after that day, though because the weather forcast said it would rain.  Which meant my husband would take our car to work instead of riding his motorcycle.
I've gone off track.  I was talking about something else.  I suppose I am avoiding the topic subconciously.  Connie had a hernia operation.  Just your normal, typical everyday, out-patient surgery.  Then a day (or two?) later, she collapsed in her chair.  Her husband called 9-1-1, and started CPR.  She was taken to the hospital.  They life-flighted her to another hospital where they induced a coma.  As they tried to bring her out of the coma, she was unresponsive, and the family had a huge decision to make.  A decision I cannot even fathom having to make.  Saturday evening, they took her off the machines.  My sister told me they felt she had already left them.  The tests done showed she had a blood clot in her lung, and that it was a result of her surgery.
Thursday afternoon was her funeral.  They burried her in a baby blue casket.  I heard her mother say it was the color of her car.  She loved cars.  She loved music.  She loved to travel, and she loved Christmas.  She will be missed dearly.  I never thought I would live in a world with out her.  I took for granted that she would always be there when Michele came to visit.  She had really great stories to tell.  She was a very calm person.  She always knew what to say to make you feel better about yourself, but if you needed a kick in the pants, she would gently give you one.  Nothing hurtful, but enough to let you know you were heading in a direction you shouldn't go.  She cared about others.  She loved her children and her grandchildren.
The funeral was beautiful and the prayer dedicating her grave (given by her husband) was so loving and heartfelt.  I walked away feeling numb, and know she is with our Father in Heaven.  But it doesn't make the aching stop all the way.  There is another hole in my heart, and I am starting to wonder how many more there will be before my life is over.
After the funeral, I was putting my things in the trunk of my car, and I shut my keys in the trunk.  Again.  We had to call a locksmith.  This is why I say sometimes I just can't function very well.  It made me late for bunko.  I hate being late.  I tried to see if some one could sub for me, but they wanted me to come.  I'm sure I looked awful because the tears still hadn't really stopped.  But we had a pretty good time anyway.  It was nice to think about something else for a bit.
The truth is, when someone you love dies, you never really get over it.  Life goes on, and the pain goes away.  But one day, when you least expect it, you realize the person you love isn't there, and a new ache begins all over again.  It's easier to push it down, and go on with life, but you wish they were still with you.  That never goes away.  But in a way, I wouldn't want it to.  I don't want to forget Connie or my grandpa.  I love them.  I know I will see them again. 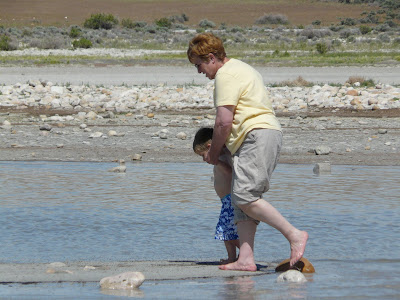 "I couldn't have asked for a better mother," her daughter, Melissa, said.

Posted by sweetlissybug at 5:10 PM