Well, At Least I Tried

On the day I posted last, we went to the pet store and Kaleb and Riley got to pick out their Christmas present from Mom and Dad.  They were so excited!  We now have three firebelly toads.  Meet Climber Brown Jones: 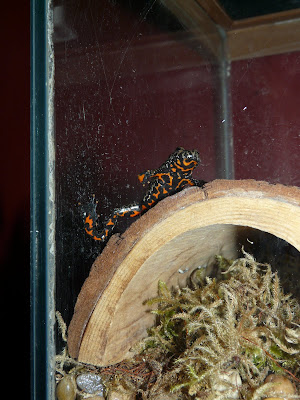 Riley named him. I would have chosen something like Jasper or something else.  He is the brown one, and often I find him climbing the walls of the tank, so I suppose Riley named him well. 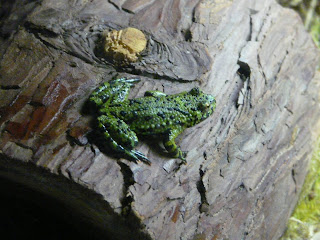 He is a darker green than Zach's and has the number 2 on his back.  We can tell them all apart.  It's pretty cool.  Also, he might be a she.  We really aren't sure.  I need to look up firebelly toad behavior, but when we put them in the tank, George thought it would be fun to jump onto them and grab them from behind.  Eventually he let them go, so we still aren't sure.  When we fed them the other day, Climber tried to grab George, so who the crap knows what's going on in that tank.  It's an episode of the Real World in there I guess. 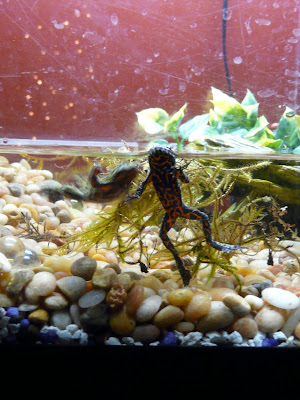 Now that you've met the new additions to our family,  I have something else to talk about.  I just haven't had time to blog and a lot has happened in the last six days.

I said I wanted snow.  Well, God must love me because the very next day it snowed, and I made my family get in the car, and go to a park (Well, I did not make us.  I would have gladly done this in the front yard or across the street in the commons area of our neighborhood, but Kurtis is easily embarassed I guess.), and take more family pictures.  It was 23 degrees, and my kids freaked out when I told them to take off thier coats.  Kurtis said, can't we just wear our coats?  To which I replied, "Then what was the point of getting similar outfits, you numbskull!"  Well, it wasn't quite like that, but you get what I mean. 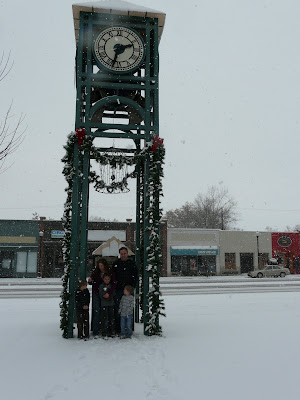 This is by the clock tower by our library, and city square.  I like this one, but you can't really see us.  Zach is crying, and so is Kaleb.  Riley is just doing his best to remain uncooperative.  He's good at it.  Maybe I will have to tell Sant to put coal in his stocking this year. 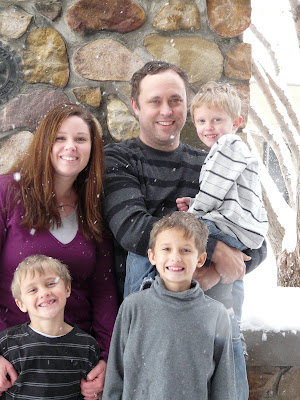 I took 3 of these with the timer on my camera (I was the photographer this time!)  This is the best one.  But it's not the shot I wanted.  And I must have moved the camera or something because I have no left shoulder.  Arg.  Maybe I will crop it. 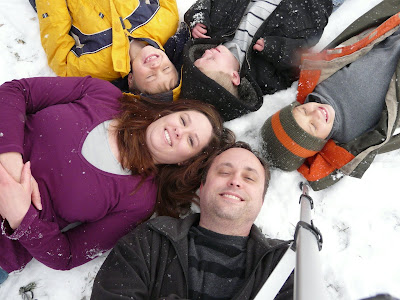 This is the shot I wanted.  But I'm the only one having fun.  Everyone else is crying.  Especially Kaleb.  And I was being nice letting them have their coats on for this shot! Oh, yeah, and that's the tripod's leg in the picture.  Not awesome.  I'm such an ameture.  But hurray for snow!  It snowed again on Tuesday too, but I give up.  Why bother.  I'm the only one who cares.  Ha ha.  I bet you can't wait to see what picture I choose for our Christmas cards this year!

It's so freaking cold now!  It's funny.  I find myself saying, "Will I ever be warm again!?"  That's such a silly question.  It's not like we live in Antartica!  I so want one of those coats that the people who work up there have to wear thought.  That would be so awesome!  I would be warm when I walked outside!

Posted by sweetlissybug at 3:42 PM