This Post is Gross. Those With Weak Constitutions Should Probably Stay Away

I forgot to mention one thing in my last post.  When I got home from Bunko on Thursday (the 17th), I checked on the frogs.  One of them was not there.  I checked like 900 times.  He was gone.  I looked in the kitchen, I looked on the stairs.  I looked every where I could think of.  I told Zach about it, and he said, "Did you pray about it?"  I did.  I didn't want him to be gone, but I really pretty much got nothin.  Which to me (and Kurtis) meant he was gone.  Kurtis suggested that one of the dogs ate him.  I think he was right.
We had a really great Christmas.  I will have to put up pictures when our laptop is no longer hating me.  The best part of Christmas (for me) was my awesome present from my parents and my grandma.  They got together and got us a dishwasher!  Holy crap, I was so not expecting that!  So cool!  Loving it!  So Saturday, my dad, mom, and brother Michael came to install it, and bring Kaleb a big boy bed.  A whole great drama story there, but I think my sister will get mad if I tell it, so I'd best not.  Not without her permission any way.  While my dad was setting up the dishwasher, my mom and I set up Kaleb's new bed.  Then Zach asked Grandma if he could move downstairs into the playroom.  We've been cleaning it out and working on getting it ready to make into a bedroom for one of the boys.  Zach got picked.  He was unhappy but then we talked him into it.  So we took out all the toys that were still in the play room and moved Zach downstairs.  When we were done taking apart the bunk beds, we pulled Riley's bed away from the wall so we could vacuum.  We were going to rearrange his furniture any way, but what do we discover?  But bright yellow dried mucusy stuff on the floor.  I was pretty sure it was dog vomit, but I really wanted it to be yellow paint.  It was so not yellow paint.  I saturated it with the pet stain remover, and let it soak.
When I came back, I started pulling little globs of rubbery type stuff out of the carpet fibers.  It was pretty nasty.  Then, the thought occurs to me:  I think I have found Climber Brown Jones.  So basically, Abbey ate him (swallowed him whole more likely), he freaked out and did his toxic secretion thingy, and Abbey went upstairs hid and puked under Riley's bed, where we found it a week and two days later.  That made me gag a little (and is making me gag, right now, too), but I had to get the stuff out of my carpet.  Seriously.  I have done some pretty gross things as a mother of three boys, but this clean up job trumps them all.  I almost puked myself.  Now, I really don't know for sure if that is what happened.  I didn't see any undigested toad body parts or anything like that, but what else could it have been!?  I've never cleaned up dog puke like that before.  Yeah.  This post was pretty gross.  Sorry.  I did warn you. 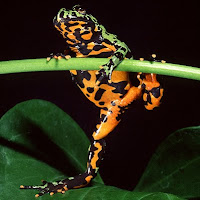 This is your typical normal firebelly toad on the left.  And on the right is what happens on rare occassions when a firebelly toad feels threatened and cannot jump away.  It's hard to see, but I couldn't make the picture any bigger.  The firebelly toad will roll onto his back, and puff out his orange tummy.  Then he secretes, a toxic milky substance.  Gross.  That would probably make you sick if it was in your stomache too.  Abbey is fine, though.  So don't worry.  Poor Climber.  I will miss him.

We got Riley a new toad that weekend.  He's named Mr. Fast.  Because when the pet store worker was trying to get him out, he kept jumping all over the place, and the guy said, "He's fast."  Riley tried to pick another brown one that was climbing up the tank.  Kurtis told me before we went in, "No more climbers this time, okay?"  Riley wanted him because he was a different color than his brothers' and he would be able to tell them apart.  I told him that wouldn't be a problem because all their spots are different.  Mr. Fast is also smaller than the other firebelly toads, so we don't have any trouble telling them apart.  But it was funny because when I put Mr. Fast in the tank, he started climbing up the wall.  I think I've fixed it so they won't get out again.  I also haven't really seen them trying to climb the walls since.

Posted by sweetlissybug at 11:47 PM

Nasty!!!Way grosser than our fish on the bib incident which I thought was pretty gross.

I'm not really isaac, but I don't know how to change that now that I am typing this. Yes, that is gross. Which sister by the way? I want to know what you didn't tell- pretty please- maybe in a secret email to your sister? :)