Zachary got his cast on today.  He is still in a lot of pain, but he is getting better on his crutches.  Getting dressed is a challenge.  The doctor said he could go back to school tomorrow, but we'll decide that based on his pain level in the morning.  Kurtis worked from home today so he could come with me to the doctor's office.  I'm glad he did.  There were good and negative things about it.  I asked Kurtis to have Zach do his homework last night so Riley could take it to his teacher for us in the morning, but after I left (I had somewhere I needed to be), Zach made his sad face and Kurtis's guilt overwhelmed him and he couldn't make him do it.  So I today, I made him do it, and took his work to his teacher.  She was making them a memory book for the end of the year and needed their page about themselves and their self-portrait by today, so she could put it all together.  Yesterday, Zach and I had a system pretty much down for helping him go to the bathroom.  I even helped him realize that he can wash his hands with out falling over.  Kurtis kept trying to do everything for him today.  I had to tell him he didn't need to let his guilt keep Zach from doing things he could actually do for himself.  I told him that if he broke his leg, he would still have to go to work.  Well, Zach still has to as well.  If he can do it himself, he should do it himself.  Here are some pictures of his splint, and then his cast: 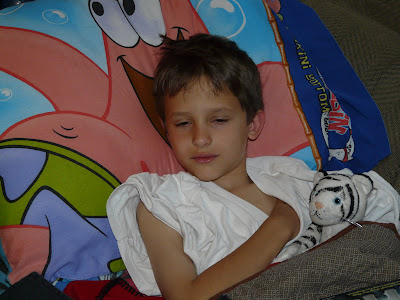 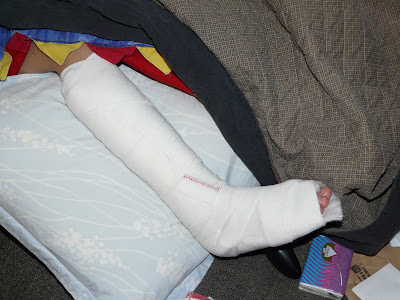 The splint.  We had to keep it elevated and ice on it. 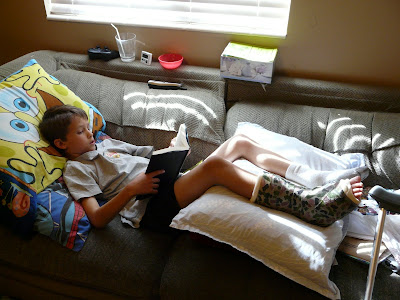 He still likes to elevate it, and it still hurts, but the doctor said because the cast keeps it so still, the pain should go away very soon. 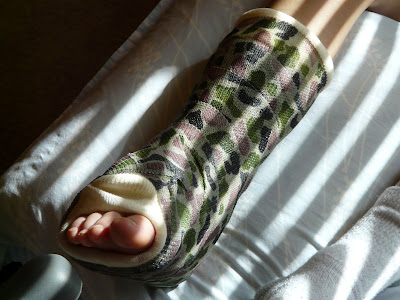 He chose the camouflage color of cast.  If they had orange, he probably would have gone for that, though.
Posted by sweetlissybug at 9:55 PM

COOL cast! At least that is something positive about this experience, eh?

Yes. His cast rocks. In 2 weeks we get to go back, take the cast off, take x-rays, to see how he is healing, and he can pick another color if he wants. Yippee!

I can't see the pics- what's up with my computer? Brian can see them on his laptop :( I think helping him find things he can do for himself is good, but if Kurtis wants to and doesn't mind helping maybe that's a good thing too. Remember Kurtis is feeling overwhelming guilt? Maybe helping Zach helps him deal. Homework- there will always be homework and if Zach's grades aren't suffering- he'll be okay with some being late or some missing. Plus, my neighbor who was a teacher says the teachers are done by now- they have to have the grades all figured out already to turn into the office so they have probably closed their books and any work now is just for routine sake and time fillers- we were discussing Isaac's teacher's sudden onslaught of "I'm done with the days work so now what can I do" writing assignments. Anyway, my point is it's okay to relax a little and find a way to enjoy it. love you.

Poor guy! At least he has a cool looking cast! How long does he have to keep the cast on?