Yesterday (Wednesday), all of the third grade classes put on a program for the parents and other third graders.  I started taping it, but Kaleb wouldn’t get off my lap.  It was annoying.  I had to pause the camera because he wouldn’t stop shaking and getting his mop top (hair) in the shot.  Also the sound is terrible.  People need to learn to shut their babies up when they cry at things like this.  I’m totally kidding, but at the same time, I’m not.  That’s pretty much what you hear in some parts.  It’s sad really.  I need a studio with sound proof walls, and better camera equipment.  And a boom mic.  And a film crew.  And I’m back to reality.  Momentary lapse.  I’ll try not to let it happen again.  Unless it’s funny. 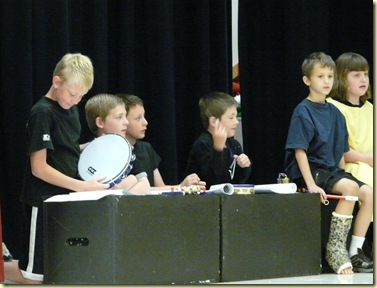 Zach was on the sound crew.

It was quite enjoyable.  I downloaded it to youtube, but I don’t think I will torture you with it.  It’s so unprofessional.  While I was there, Zachary’s teacher told me a funny story about their fire drill the day before.  Apparently, nobody warned her there was going to be a drill, and so when the alarm went off, she was a little startled.  Then she had another teacher help with her class, and she picked up Zach, put him on her chair, and wheeled him out with the rest of the class.  She said, “I did that because that’s what I would do if there really was a fire!”  Zach never tells me anything.

Today (Thursday), Riley was a finalist in the first grade spelling bee.  I went to see him compete with the other first graders in his school.  I was expecting a full on spelling bee.  You know, eliminations, and tears.  That never happened.  If the child misspelled the word, he had to go sit down with the other students, but if he got the word right, he stayed up with the other students who also got their word right.  Then they went through some cards, oh, maybe five times, and whoever was left won.  RILEY WON THE SPELLING BEE!  He’s so awesome!  I am such a proud mom.  Although, when about twenty other students win as well, it kind of makes it a little less special.  At least it was short. 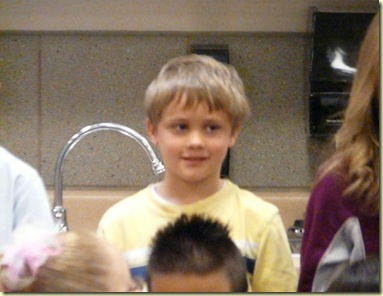 Riley after spelling his word right.  He looks relieved. 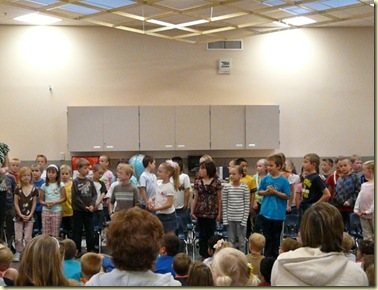 All of the spelling bee winners.


And finally, Zach was presented his Wolf badge at scouts tonight.  He finished before his ninth birthday by the skin of his teeth. 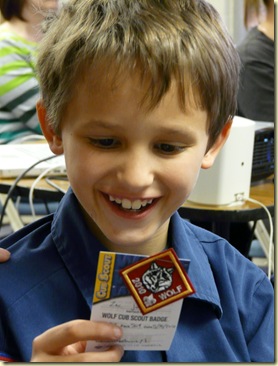 We celebrated with the coupons for free ice cream we got at the dentist today.  I have a (small) cavity- despite all the excellent flossing I have been doing, Riley has to get some surgery on his mouth that should correct the gap in his teeth, Kurtis is going to get the cap on his implant fixed (it’s loose, and at least the dentist will do that one for free because it was his mistake), and Zach is going to get spacers on his bottom teeth.  I. Want. To. Cry.  And maybe swear a little.  The hygienist really liked my new year’s resolution, though.  She gave me some pretty high praise.
Oh, and I almost forgot.  When we were getting ice cream, Kurtis said, "Isn't going to the dentist awesome?" Because they get free ice cream cone and hamburger coupons (we'll use the hamburger ones another day).  Kaleb replied, "Yeah.  Because you get new toothpastes!"
Posted by sweetlissybug at 12:16 AM

Brian, who as you know is an accountant and dentist in his spare time, says Zach doesn't need spacers. Hehehe. I'm sorry. I did love the ending of your blog and i think my favorite part was reading about the spelling bee (congrats to Riley!)and seeing the photo- seeing the photo of the winners made it all the better, I laughed out loud. Did you have a good holiday?

Well, he doesn't need them on the top, that's for sure. But you can't see his bottom teeth. He needs them on the bottom. The dentist is hoping it will widen his arch on the bottom, and all his teeth will just align themselves. I'll take a picture for you later. He's asleep now.