See These Eyes So Green

So all my life, I have wanted a cat.  My mom always said, "No.  I'm allergic to cats."  For a really long time, I felt like there were too many people in my life allergic to cats, so I couldn't have one if I wanted them to be able to come to my home.  But apparently, I'm over that.  Cats are awesome.  My children keep begging me for one, and my birthday is on Tuesday.  I'm getting a cat!  My friend's cat had kittens awhile back, and before I could tell her I wanted one, she had already given them all away.  She told me she had posted them on our local classified site and they were all gone by the end of the week.  She also told me that our neighbor had a wild kitten that just needed to be petted and it would be tamed.  I nodded and smiled at that.  I mean, really?  I don't know about that.
So a week or two later, I was looking at the local classifieds my friend mentioned to see what we could see. Well, that cat ended up being posted on there along with a few other kittens.  Most people wanted me to buy their kittens.  I decided to just go ahead and give this poor little kitty a chance.  I mean, he's wild, but aren't we all a little wild?  I called the neighbor and Zach and Riley came with me to pick him up.  He's so tiny and so cute!  Then he hissed and me, and I was in love.
We quarantined him to our laundry room for a couple of days.  Just feeding him and trying to get him used to us.  Kurtis got him to eat out of his hand the night I went to the concert.  I was so jealous.  Animals kind of freak me out a bit.  I love them, but I don't know what to do with them.  I blame it on the fact that I just didn't grow up with them. I'll figure it out.  The next day, Kurtis showed me what he did and he was eating out of my hand too (and the kids').  :)  Well, I was getting kind of depressed that I couldn't bond with my kitty and hold him and Kurtis could tell how I was feeling, so Kurtis said, "You know what?  I'm just going to pick him up and see what he does."
It wasn't easy getting him out of the dog carrier our neighbors lent to us, but he did it!  We are now able to hold our kitten and he doesn't hiss at us any more!  I'm so excited.  :)  We haven't really let the dogs meet him just yet, but I think things are going to be just fine.  :) 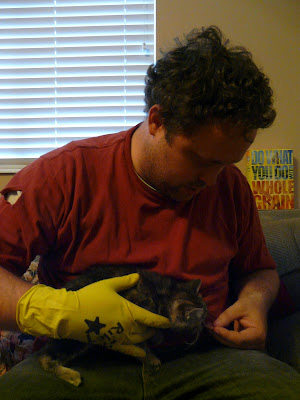 Kurtis is trying to feed him a small bite of baloney, but he was too nervous to eat at first. 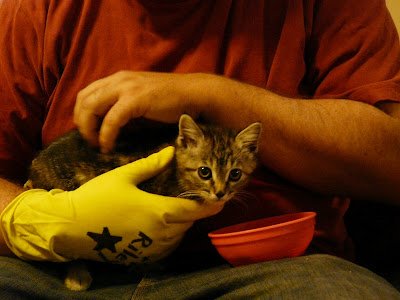 Kurtis and I were talking about what we should name him.  We think he's a boy, but we're not experts, so we're still not sure.  Any way, he suggested we name him Moka from some Anime he watched once.  I looked up the word cat in Japanese and it's Neko.  I was going to name him Moka, but then I accidentally called him Meko, and I liked it.  So his name is Meko!  He's adorable!
Posted by sweetlissybug at 8:40 PM